Gather with loved ones for heartwarming holiday entertainment

Oh, the weather outside is frightful, but the warm glow of the stage lights is delightful, so shed those hats, gloves and scarves and head indoors for some holiday performances, classic and otherwise.

If taking in one of the various renditions of the Charles Dickens classic A Christmas Carol isn't already one of your yearly traditions, it probably should be. A holiday tale of love and redemption, A Christmas Carol tells the familiar story of the irascible Ebenezer Scrooge's transformation.

This season, the Spokane Civic Theatre presents a musical version of the tale, directed by artistic director Keith Dixon. The show runs Thursday-Sunday nights, through Dec. 20. Because the Christmas spirit is all about goodwill, the Dec. 10 performance benefits the Northeast Community Center. A silent auction takes place before that show, with refreshments served. Benefit tickets are $35 at necca.myspokane.net.

The community center's executive director, Jean Farmer, says the performance is the perfect way to "start the holiday season and support the good work in the community while enjoying the holiday play."

Meanwhile, the Idaho Repertory Theatre and University of Idaho Theatre Arts department present their own rendition of the Christmastime staple at the Hartung Theater, showing Dec. 4-20. The play is directed by David Lee-Painter, a UI theatre professor who has played Scrooge in three different productions.

For a holiday-themed history lesson, check out All is Calm, a musical production based on remarkable true events surrounding the Christmas Truce of 1914, a series of unofficial cease-fires on World War I's Western Front. The Modern Theater in Coeur d'Alene is one of a select group of theaters chosen to present the historically based tale of camaraderie, music and peace. The performance runs Thursday-Sunday nights through Dec. 21. Get tickets ($17-$25) at themoderntheater.org.

Though not holiday-themed, the rock musical Rent, which originated on Broadway, tells the story of a group of struggling young artists and musicians trying to survive on New York City's Lower East Side. Directed by Troy Nickerson and presented by the Modern Theater and Friends of the Bing, the show takes place Dec. 26 and 27 at 8 pm. Tickets are $25, and can be purchased at bingcrosbytheater.com.

The timeless holiday favorite White Christmas returns to the silver screen, along with several other flicks featuring Spokane's beloved son Bing Crosby, for the ninth annual Bing Crosby Holiday Film Festival. Kicking off and concluding the fest is a showing of White Christmas, with two films — Anything Goes and Holiday Inn — showcasing Bing's other leading roles sandwiched in between. Before the evening reprise of White Christmas, catch a live musical performance by Bing's nephew Howard Crosby. Between screenings, peruse the theater's lobby, filled with Crosby memorabilia and family photos. Sat, Dec. 13, starting at 11 am. $8; kids 12 and under free. bingcrosbytheateradvocates.org

The Lake City is a sight to see during the holiday season, with its waterfront light display and themed cruises. This year, the Coeur d'Alene Resort presents I Remember Christmas — A Christmas Revue, starring veteran actress Ellen Travolta, who returns to the stage after last year's popular A Christmas Cabaret. The holiday performance, directed by Troy Nickerson, features Travolta alongside an impressive list of seasoned actors; Jack Bannon, Patrick Treadway, Margaret Travolta and Katherine Strohmaier. For those looking for a more memorable holiday getaway, the resort is offering package deals on tickets and accommodations. Nov. 28-Dec. 21; Thu-Sat at 7:30 pm, Sun at 2 pm. $25. cdachristmas.com 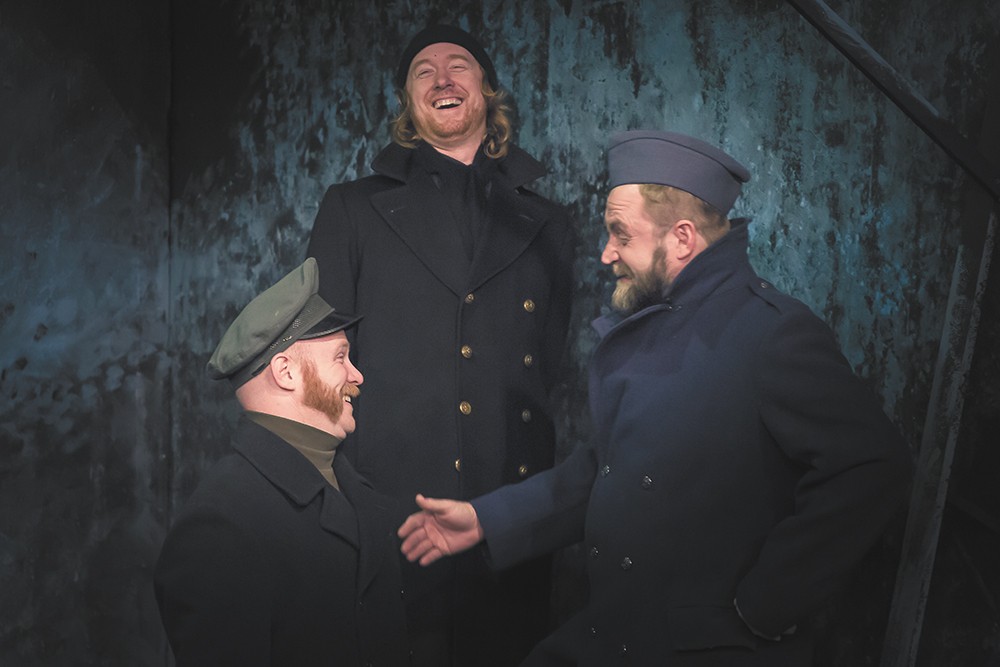 Laughing all the Way

Let's face it — between draining your bank account on Black Friday, your unpleasant in-laws coming to town and the pressures of entertaining, the holidays can get a little stressful. But before you self-medicate with yet another baked good or spiked eggnog, consider a different form of relief: comedy. The Blue Door Theatre's live comedy improv show Season's Greetings uses holiday cards and messages for festive comedy fodder. As an added bonus, the tickets are just $7, so you can still afford one even after all that holiday spending. Fridays, Dec. 5, 12, 19 and 26, at 8 pm. A raunchier adult version, the monthly "After Dark" special, is Dec. 26, at 10 pm. bluedoortheatre.com

Can't get enough of that Christmas music? Head to the Kroc Center in Coeur d'Alene for the third annual Traditions of Christmas, a musical journey featuring carols and holiday songs from around the world. Audience members are invited to sing along to holiday favorites like "White Christmas" and "Joy to the World." Santa's workshop comes alive on stage, complete with dancing elves and toy soldiers. The revue-style performance also features Rockette-style dancers, a nostalgic USO-inspired scene to honor the military, and a living nativity. Dec. 11-22; times vary. $20-$33. traditionsofchristmasnw.com ♦

An Inland Northwest Kind of Holiday

The Five Flicks of Christmas