Charles Potter spent a night in jail for watching officers arrest someone else. Now, he wants the city to pay 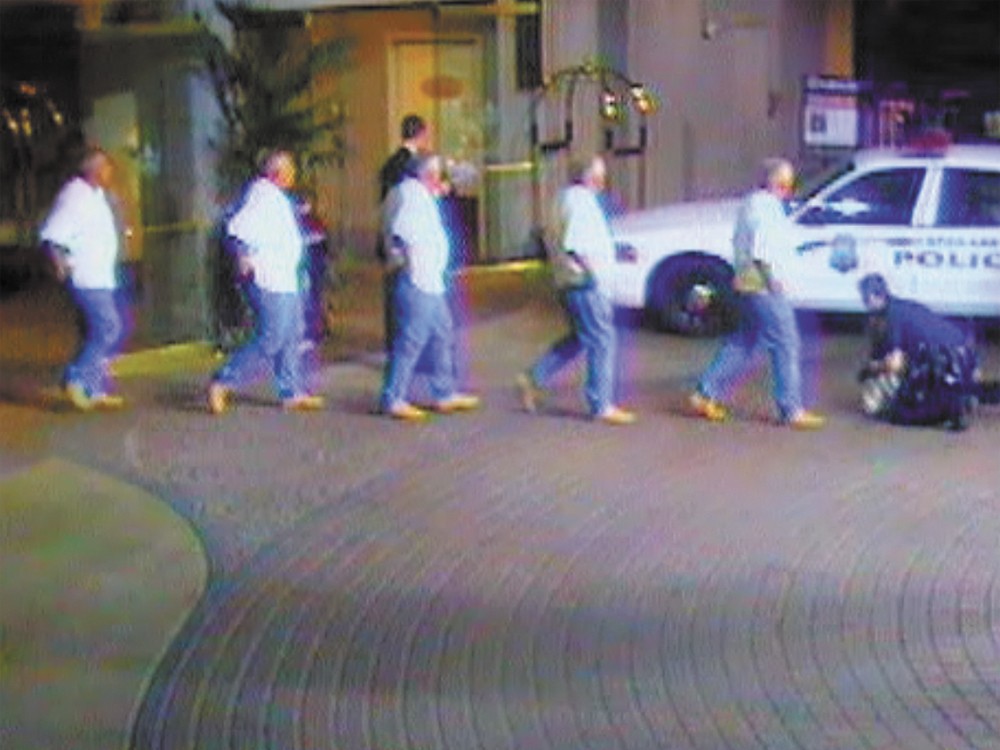 A composite of frames from video captured of the 2008 arrest of Charles Potter.

Charles Potter didn’t know the two men in handcuffs. He didn’t know why they were being arrested and put in Spokane Police Department patrol cars, but that didn’t really matter.

“I found myself in the middle of something where I felt like someone was being brutalized,” Potter says.

The way he remembers it, as Potter was waiting for a cab in the Davenport Hotel’s sally port on a summer night in 2008, he saw an officer bending one of the men’s wrists as he steered him toward the waiting patrol car, causing the man to yell in pain and arch his back to alleviate the pressure. The tactic is called a “goose neck,” the officer would later testify, and is a pain-compliance technique used to keep uncooperative arrestees from hurting themselves or officers while handcuffed.

Then, Potter says, he watched an officer stomp on the man’s bare foot. Potter got up from the bench where he was sitting and approached the officers, telling them he was “just there to make sure nothing happened.”

“I had only intentions of watching,” says Potter, who lives in Spokane. “I was just curious.”

But when officers told him to back up and he refused, one of them put his arm around Potter’s neck, bringing him to the ground and, with help from a second officer, arrested him. Potter was charged with obstructing justice and resisting arrest, but the jury at his 2009 criminal trial found him not guilty.

Now, in a suit naming the city and the two officers involved, Potter says officers trampled on his free speech rights and Fourth Amendment protection against unreasonable search and seizure, injured him in the process and should have to pay for the distress and resulting legal bills.

Potter is being represented by attorney Breean Beggs, well-known for representing Otto Zehm’s family in their civil case against the city, which ended in a $1.67 million settlement this spring. Zehm died after a violent confrontation with police in 2006, and former SPD Officer Karl Thompson was found guilty of violating Zehm’s civil rights by using excessive force against him in the incident.

“The important thing in a case like this, like the Karl Thompson case, is educating the public and the police about their responsibilities,” Beggs says. “You can’t be preemptively assaulted if you’re not objectively threatening.”

On that August night in 2008 when Potter was arrested, Officers Jake Jensen and Corey Lyons had arrested brothers Mark and Adam Foster after they got in a fight in their hotel room. As the officers put Mark in one car and waited for a second car, they say Adam was resisting and being belligerent, and that the difficulty of keeping him under control was exacerbated by Potter’s observing from a few feet away.

In testimony at the criminal trial and statements for the civil case, officers say they first noticed Potter standing about 10 feet from the arrest, and told him to back off. He didn’t comply, and by the time Potter was arrested he could have been observing from as close as three feet, the officers says.

Potter and the city agree that he was told to back up and that he didn’t, but the subtleties are disputed.

Officers deny ever stepping on anyone’s foot and say they told Potter to back away five or six times. Potter sticks by the foot detail and says they told him twice or three times. When the officers finally took him to the cobblestone, they say he was resisting arrest. Potter, who had shoulder pain before the incident, says they were hurting him bad enough that his body was tensing up, but that he wasn’t intentionally resisting the arrest. (After that night, Potter had surgery for a tear in his shoulder, which he says cost him and his insurance company more than $20,000.)

Security camera footage from the night shows Potter approach the officers and shows them arrest him. It's hard to tell exactly how long Potter stood there before he was arrested. Since the cameras only record when there's motion in the frame and the officers were standing at the edge of the frame, the video cuts out the seconds between Potter approaching and the officers taking him down. At the 2009 trial, a member of the SPD’s special investigations unit who specializes in surveillance systems and electronic surveillance estimated it was about 31 seconds.

Beggs says the civil case now under way accepts the city’s view of all those details: It assumes that officers didn’t step on Foster’s foot and agrees that Potter could have lingered for as long as 30 seconds before officers took him down.

“Even in their version of everything in the story, they exceeded the Fourth Amendment,” Beggs says, arguing Potter did nothing to give cops reason to believe he was a threat.

The city’s case rests on the potential for violence. Police say because they didn’t know whether Potter could have been intoxicated or armed, and they felt threatened when he didn’t back off. Their statement of facts emphasizes Adam Foster’s erratic behavior, arguing Potter’s approach forced them to divert their attention.

“I understand that people have the right to assembly and freedom of speech and [the] First Amendment,” Officer Jensen said during his deposition for the civil case, according to court documents. “But I also understand that when safety is involved, like officer safety and you have articulable facts of why you are concerned about certain things that might go awry if you allow certain people to continue what they are doing, then I think you have kind of an obligation to make things safe, so they can continue to happen in a safe manner. You can’t have just chaos and people do[ing] what they want.”

Potter, a 58-year-old financial consultant with gray hair and a short gray beard, says officers had no reason to view him as a threat.

“I’m not a person who’s going to fight or brawl or, frankly, even take on too much physical work,” he says. “The idea that I would take a risk to try to fend off two young, armed policemen in their 30s … was not in my mind at all.”

Officer Terry Preuninger — the department’s lead patrol procedures instructor who testified last year that Karl Thompson did not use excessive force in his deadly encounter with Otto Zehm in 2006 — has made a declaration in this case. He backs up the city’s claims that because of the uncertainty of what Potter might do, officers had a right to arrest him when he refused their orders.

“I have strongly emphasized the inherent danger of allowing any unknown subject to walk into this volatile zone where anything could happen in a split second, and there would be no time to prevent a violent act,” Preuninger says in the statement. “I have trained my officers to order subjects to back away, and if they do not do so, to remove these interlopers from the area so that the situation does not escalate dangerously.”

Preuninger says department policy prevents him from talking about the specifics of the case, but agreed to talk about general training and policy in an interview with The Inlander.

“What people forget sometimes is you have to take yourself out of the context of what you know to be the truth,” Preuninger says, “and think about how many hundreds of variables there are for that officer.”

Preuninger, who’s also been a patrol officer, says most onlookers back off when they’re told to, but some are confrontational. He remembers people who’ve attacked or jumped on him as he’s broken up bar fights and domestic violence. Others have followed his orders to step back, only to walk away from the scene and then come up behind him.

“When you’ve been in situations where someone’s assaulted you — we’re human. Those things stay with you,” he says. “It’s not an excuse for me to overreact … but it does temper how cautious I may be.”

But Beggs says current police culture does more than leave it up to the officers. He calls incidents like the one involving Potter a “plus one approach,” where officers meet whatever force they encounter with that amount of force, plus some. That, he says, “doesn’t seem to fit with the Constitution.”

Use of force has been a divisive topic in Spokane, especially since the Zehm case, but Spokane Police Ombudsman Tim Burns says he hasn’t heard complaints about officers’ reactions to bystanders and he isn’t familiar with the Potter case. He says that could be in part to a policy recommended by his office and currently written into department policy that allows citizens to record officers as long as they’re not interfering.

The last high-profile First Amendment complaint in Spokane came after 17 protesters were arrested in Riverfront Park on July 4, 2007, as they called for police reform in light of Zehm’s death. Dozens of local attorneys volunteered to represent the protesters for free, according to media reports, and the city dropped charges against the one protester who refused a plea deal.

Beggs says he’s been approached by “numerous people” in Spokane with claims similar to Potter’s, but that few of them are caught on videotape. He also expects the city’s Use of Force Commission to address the issue in its report expected out later this year.

Preuninger and Burns say bystanders who are concerned about officers’ actions have ways to make their voices heard without approaching the scene.

“We need to trust in law enforcement using the techniques they’re trained in,” Burns says. “While we might not agree with them or accept them or like how they appear, it’s not our job at that time to assess officers in their duty.”

“Read our side of the case and give us a fair shot. I’m not going to talk to you,” she said before hanging up.

The city has filed a motion to dismiss the case, which the court will consider in oral argument on Dec. 14. A trial date is set for Feb. 4.

For Potter, the case has been a burden, but one he feels he can’t abandon.

“People need to understand that you can be an innocent bystander and end up in a position where you’re injured for life, insulted for life and defending yourself for life,” he says. “If somebody had stood up to the police years and years ago, we wouldn’t have a culture like it is now. … When you have the facts on your side, you better stand up for the facts or else you deserve the culture you end up living in.”