LucasArts sent in the clone for this one. 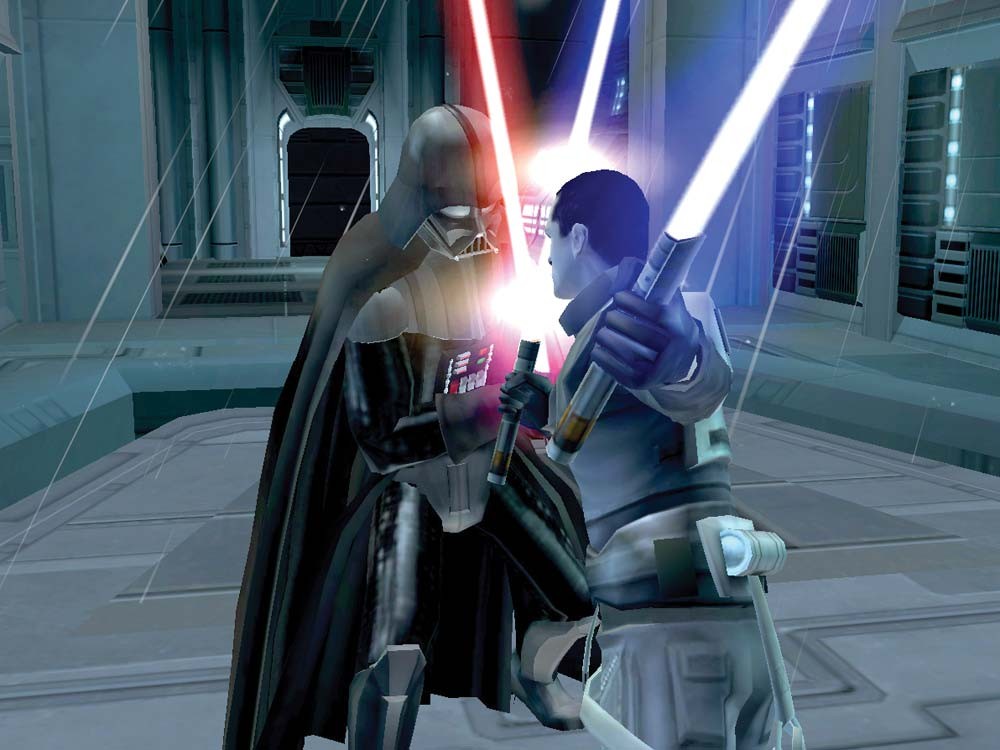 Can the force be with a clone?
on.”

How do you bring a hero back to life? This question has puzzled storytellers for centuries, and I have to give credit to Star Wars: The Force Unleashed II for actually trying to make sense — at least in Star Wars terms. Starkiller, the hero of the original game, died after he betrayed his master Darth Vader. So when Starkiller reappears at the beginning of the sequel, shackled and shuddering in an outer space dungeon, Darth Vader explains to him that he is a clone.

This sort of rinky-dink plot twist would normally be fine. After all, The Force Unleashed II is an action game. What I really want to do is pirouette through battalions of storm troopers, my dual lightsabers spinning and slicing. I want to leap up above my enemies and rain a shower of blue lightning down on them until flames pop out of their flesh. I want to hurl giant robots through windows with the power of my mind and crush TIE-fighters in midair.

For the most part, The Force Unleashed II lets me do all these things and more. But this isn’t just any old action game. This is Star Wars. Every major episode of the franchise begins with a long block of text moving slowly across the screen. At its foundation, Star Wars is a story. And stories deserve better telling than “You were cloned and woke up without your memories.”

George Lucas’s universe still looks like the best in the galaxy. A city hangs from a mammoth stone bridge. Spaceships enclose skyscrapersized rooms filled with thrumming machinery. But much of the gameplay feels like it was copied from elsewhere. In a gladiator arena, a Gorog pops out of the ground like a giant Final Fantasy videogame boss. The Gorog, as its name suggests, resembles The Lord of the Rings’s balrog, and I fight him like Gandalf, falling through space for several minutes.

Starkiller charted his own path in The Force Unleashed. His transition from the dark side made him more than a mere avatar — he was a character. But in The Force Unleashed II, he’s stuck following the plotline of a sequel’s business plan. And so he dutifully tries to rescue the princess (his girlfriend from the previous game) and pursue the bad guy (Vader, of course). If this is what they resurrected him for, they should have let poor Starkiller rest in peace.

THE GOOD: If the story is weak, at least it’s told with vigor. The designers have concocted a plotline that moves quickly, taking me from a grueling, intimate battle with a Terror Walker into the midst of a fullblown spaceship war, all without losing momentum or mood.

THE BAD: A game that includes so much jumping and flying motion should make better use of up and down attacks. As it is, I can’t make my lightsaber attack upwards or downwards — which is odd, considering the number of gigantic droids I stand beneath or on top of during battles. As it is, only Force Lightning manages to connect in all directions, making it the most easily used and abused weapon in the game.

THE BOTTOM LINE: LucasArts sent in the clone for Star Wars: The Force Unleashed II.