Why the Washington State Department of Corrections is housing veterans together 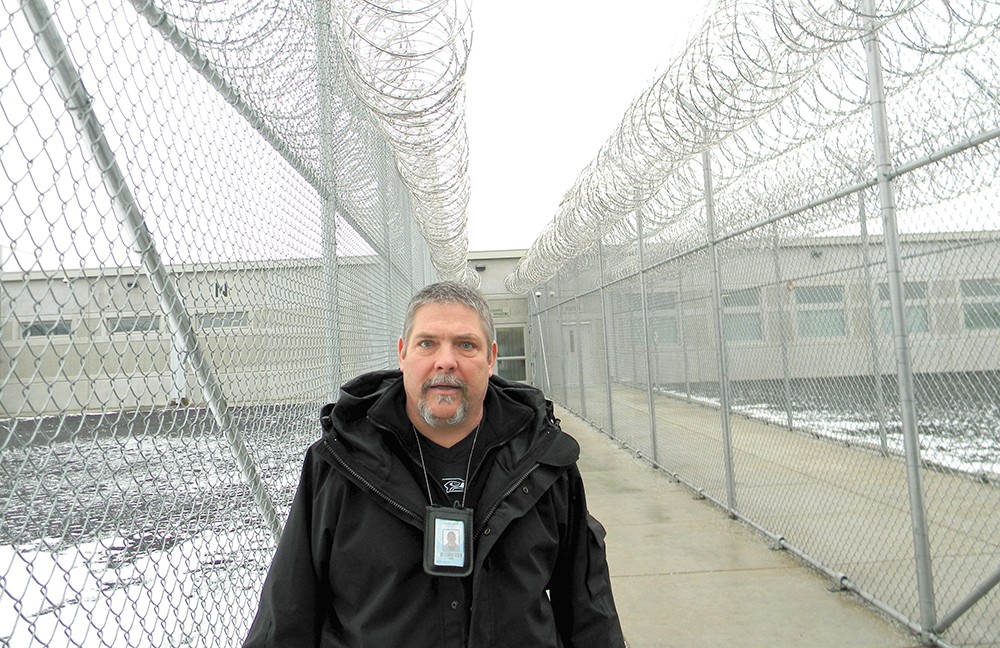 Behind razor wire and under the watchful eyes

of corrections officers, a venerated ritual is held each morning. First, a voice comes through the intercom in two housing units: "Veterans to the flag." Minutes later, prisoners wearing khaki prison uniforms and white New Balance sneakers emerge from two concrete housing units on either side of the courtyard, marching in military formations or pushing wheelchairs for older inmates.

"Halt stop!" one inmate barks and the formation stops next to a flag base in the middle of the courtyard. An American flag is dutifully unfolded and run up the pole as the other inmates stand silently. After a salute, they march back to their housing units.

These men were once exalted as heroes who signed over years — in some cases even decades — to the country's armed services. Some were stationed at bases. Others saw combat in Iraq and Afghanistan. But they all took wrong turns. This morning ritual is one way they're reminded of a shared experience when they were revered by the public. Now it's helping them cope with incarceration.

In Washington, the state Department of Corrections has joined a handful of other states that have begun housing veterans with honorable discharges together. The thinking behind the idea, dubbed the Veterans Project in Washington state, is that clustering inmates with military backgrounds will tap into the discipline they cultivated from living in highly regimented environments in close quarters with other men.

"It's got a profound impact on violence reduction in this unit, period," says David Hilpert, a counselor at Coyote Ridge Corrections Center in Connell, Washington. "It's all about trying to make a better person to hit the street."

at Coyote Ridge more than six months ago, he was separated from the other inmates he was bused in with, leading him to think, "I'm in really bad trouble."

But instead, Vasconcellos, a 45-year-old who did an eight-year stint in the Army and is serving time on an assault charge, was sent to B-Unit, a housing unit where inmates with military backgrounds are housed. Vasconcellos had been in jail before, and remembers fights breaking out with inmates high on drugs or in the throes of mental illness. But this was different.

He was greeted with a stern Uncle Sam extending his finger with the text, "B-Unit Veterans. We Want You." The other inmates welcomed him and gave him instant coffee and a box of crackers. He's getting mental health services, and he's hoping for an early release this year. Being around other veterans, he says, has made doing time easier and reminds him daily of his past service.

"In the military, you have to live together and put up with each other, because you have to depend on each other so when you go out there you don't die," he says.

"I committed a crime," he says. "I'm paying time for the crime, but I'll always be a soldier. I'll still fight for this country no matter what I did."

There are 240 veteran inmates in the two units at Coyote Ridge, according to the DOC. In each unit, banners for each branch of the military hang from the wall, along with a POW flag. Next to the entrances are murals depicting bombers and soldiers. On the cell of each inmate is a placard designating the branch of the military he served in. On the back of each inmate's ID card is a code of conduct stressing honor, integrity, service, respect and personal initiative.

"I think these guys feel like they can control some of their environment," says Hilpert, the counselor at Coyote Ridge who did 12 years in the Army and helped set up the project. "They were soldiers at one time. That oath of enlistment, you take that for life."

Inmates and staff say that both housing units are largely free of the gangs, racially charged politics and extortion that's common elsewhere in prison. Numbers from the DOC show that infractions are three times lower than the facility's general population. At Stafford Creek Correctional Center in Aberdeen, the only other DOC facility with veterans' housing, they're lower than half.

The Veterans Project began in 2012, when the DOC began looking for way to connect incarcerated veterans with benefits they might be eligible for, such as housing, disability or medical, so they would be able to access them upon their release, says Herold-Prayer. At the time, she heard that Florida had taken it further, recreating the trappings of military life in its prisons for veterans. She and other DOC staff visited three facilities in Florida, where she says she encountered safe units inhabited by veterans glad to be there.

"We decided as an agency to give it a try," she says.

Nationally, there are 181,500 veterans in prisons, according to the most recent count by the U.S. Department of Justice. Some states like Virginia and California also have similar initiatives. Idaho, which has 650 inmates who identify as veterans, has nothing similar.

Getting the Veterans Project started at Coyote Ridge was rocky, recalls Hilpert. Corrections officers, many from military backgrounds, would pull inmates aside in the middle of the daily flag-raising and search them, he says. Veterans also were reluctant to relocate to a new housing unit. James Turner, a Navy veteran doing time for a sex offense, remembers relocating to veterans' housing when it started two and half years ago.

"When I started here, there was only like 15 [veterans]," recalls Turner, who is now the president of his housing unit. "So we had a lot of politics, a lot of violence, a lot of the typical prison mentality. Once we got 30, 35 people, we became the biggest gang, so to speak, and the politics dropped away and it started to get easier to live here."

At G-Unit, the other veterans' housing unit at Coyote Ridge, Christmas decorations hang from cell doors during a visit earlier this month. Inmates mill about sipping instant coffee from large plastic mugs, or sit together at metal tables in the day room, which has the feel of a community center. Unlike parts of the prison, there's no door slamming or yelling because loud noises put some veterans on edge.

"I'm Army, he's Marine Corps, but he's my other brother," says Anthony Rowe, a black inmate, gesturing toward Scott Weaville, a white inmate seated next to him.

Veteran inmates, says Rowe, look out for each other and police each other. The veterans get along so well that they even prepared a special dinner of nachos for their housing unit on Veterans Day, a rare level of cooperation in prison.

Hilpert says that one of the rules to staying in the unit is having no major infractions, such as assault. To date, he's only had one.

, was moved from the Veterans Project after tearing apart a cell in November when he suspected another inmate of stealing from him.

In an office in C-Unit, he tells Hilpert he's sleeping more and has begun using a therapeutic coloring book for his post-traumatic stress disorder. He's also getting more exercise.

"I cut out all the bread and muffins," he tells Hilpert.

"A healthy body, a healthy mind," says Hilpert. "Work on how you improve doing that prison time."

"When I was in the hole, I was really kicking myself in the butt," says Sanchez, who is disappointed that he let Hilpert down.

Sanchez holds an intense gaze and punctuates his speech with a crisp "sir." He joined the Army in 2008 and was deployed to Afghanistan, where he frequently was engaged in combat. Some Afghans working as interpreters were secretly working for the Taliban, and he never knew who to trust.

Upon returning, his wife and five kids never knew what would set him off. Sometimes the wrong TV show would send him into a rage. Some nights he awoke frantically looking for a weapon. Friends from the Army committed suicide. His marriage crumbled.

When his sergeant discovered he was receiving mental health services, Sanchez says he was told to stop, and he turned to alcohol.

"He told me, how could he rely on soldiers if they needed a crutch?" he recalls.

In 2013, Sanchez beat Angela Cannizzio, his live-in girlfriend, and strangled her to death. He was sentenced to 18 years in prison. He says he doesn't remember it happening. In C-Unit, Sanchez says he's always on edge from inmates slamming doors and walking up behind him.

David Morris, a combat veteran and author of The Evil Hours: A Biography of Post-Traumatic Stress Disorder, says that Sanchez isn't alone in his condition, and that historically after a country goes to war, it sees an uptick in violence after its soldiers return, acclimated to combat.

A U.S. Department of Justice study released last year found that while veterans were less likely to wind up in prison than the general public, those that did were twice as likely to report being told they had PTSD by a mental health professional. A 2012 study published in the Journal of Consulting and Clinical Psychology drew a link between PTSD and the likelihood of criminal arrest.

Sanchez says he's haunted by what happened. But he says one thing hasn't changed: "In my mind and heart, I'm a soldier, and no one will ever take that away."

Herold-Prayer hopes that the Veterans Project

creates a more stable environment for veterans that ultimately means they succeed after being released. But aside from infraction numbers, she says the DOC has no data on how well the project is working because it's so new, and there's been no academic research to date on it.

Indeed, Hilpert says he had high hopes for a recently released inmate from the Veterans Project who now has a warrant out for his arrest.

But as Hilpert walks outside of the housing units back through the chain-link-fence corridor, he knows this: "If you treat them like they're human, they'll treat you right." ♦