Crashing a small-town tradition at the Lind Combine Demolition Derby 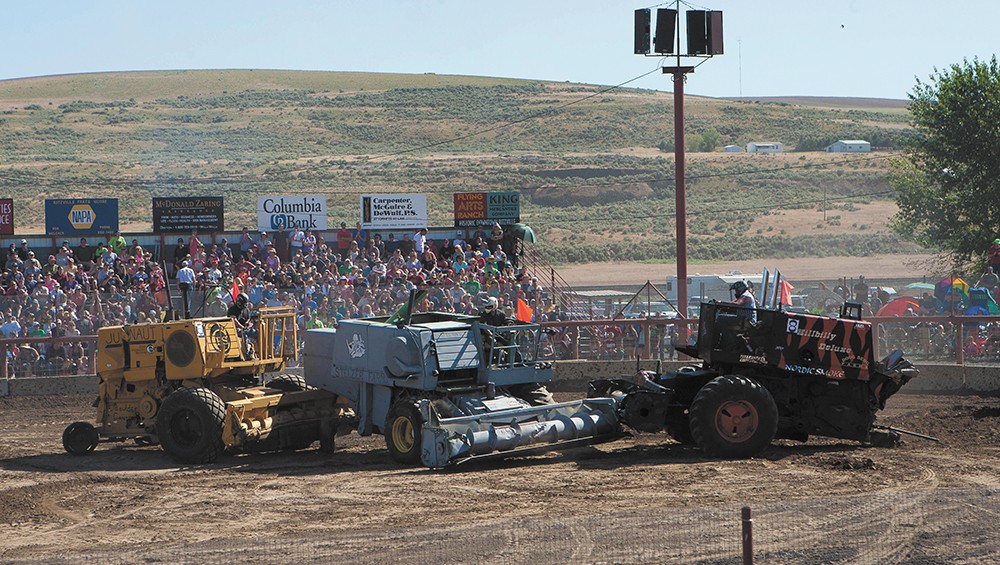 meghan kirk
Crashing combines give the Lind derby something special to draw crowds to the annual event.

The first time metal hit metal with a resounding crunch,

punctuated with the crowd's roar and collective raising of beer cans and high-fiving hands, I knew I'd made the right choice of Saturday afternoon festivities.

A hot and windy day at a noisy dirt-track outdoor arena — the air filled with the scents of engine exhaust and grilling sausages — might not be for everyone. But it should be. There are few better ways to get to know a small town than attending its most noteworthy community celebration.

For some towns, that might mean attending an arts festival. Maybe a regatta or a parade. For Lind, Washington, the annual Combine Demolition Derby fits the bill. This year marked the 28th edition since it started as merely a bit of intermission entertainment at the town's old rodeos.

Demolition derbies have been part of the rural American landscape for more than half a century, but few can compare to the one put on by the Lind Lions Club each June roughly 75 miles southwest of Spokane, just past Ritzville.

Between the racing and crashing pickups, grain trucks and combines, the Lind derby brings a remarkable amount of steel to the party, all in service of raising money for the small town — population less than 600 in the 2010 census — and entertaining everyone from young families to old-timers, bikers to college kids. All the revelers on hand want to see combines named JAWS, Hillbilly Deluxe and Beaver Commander bash into each other — often, and as loudly as possible.

meghan kirk
The crowd in Lind on Saturday, June 13.

Farm tractors might look like ungainly conveyances for a demolition derby, given their sheer bulk. But seeing the combines in action gives one a similar feeling as seeing a buffalo in the wild; they're definitely faster than you think, and remarkably nimble for their size.

The combines are the deserving headliners in Lind, but the action is virtually nonstop thanks to multiple heats of highly destructive races held between the combine events. And the demo derby itself is just one part of a weekend-long party that included pickup races Friday night, a community breakfast and parades Saturday before the rock 'em, sock 'em action started, and even more races on Sunday.

The trip got off to a rocky start as I whipped right by the Lind/Kahlotus exit on Highway 395. As anyone who's spent any time driving around rural Eastern Washington knows, missing an exit quickly becomes a half-hour mistake spent searching for somewhere — anywhere — to flip a U-turn and get back headed in the right direction.

Thankfully, I still got there in plenty of time to join a few thousand people in the little arena marked by a U.S. flag on one end and a WSU flag on the other, the dirt center surrounded by bleachers and a layer of metal fencing designed to keep flying machine parts from hitting anyone in the audience.

A drop of the flag, a roar of the engines, a cheer from the crowd and another round of destruction is off and running, bringing generations of Lind natives together for an annual town ritual, and welcoming visitors from afar into the tight-knit community, too, even if just for a day.♦