As arts organization Terrain puts a cap on its first decade, its organizers look back as they move forward 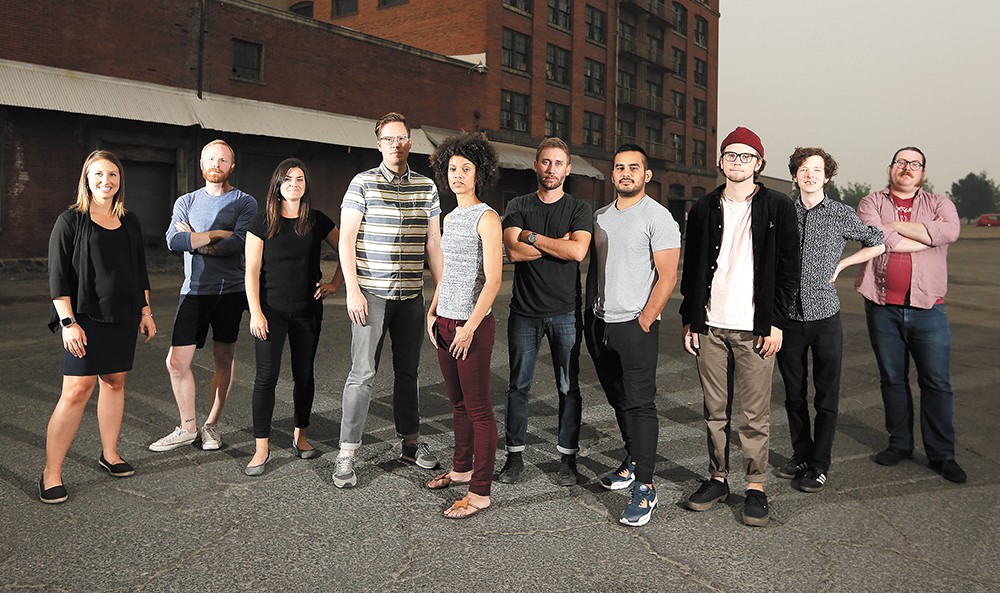 There's one true barometer for gauging the success of a party:

All the booze runs out.

Halfway through the first-ever Terrain reception back in 2008, the kegs officially ran dry, and as the organizers ran out to grab more, it became clear to them that this might not be a one-off occasion.

"We strapped [the kegs] into the back seat of my Corolla," organizer Luke Baumgarten recalls.

"We weren't thinking beyond that night, but we knew we'd tapped into something pretty special," organizer Ginger Ewing says.

That first year, 30 artists submitted 62 unique pieces — "And by 'submitted,' we mean we begged people," Ewing says — and some 1,200 people showed up at the Wall Street building, complete with a downstairs bank vault, that now houses the Reserve Bar.

Contrast that with last year's Terrain, which showcased more than 340 pieces of art and drew a crowd of roughly 8,400. 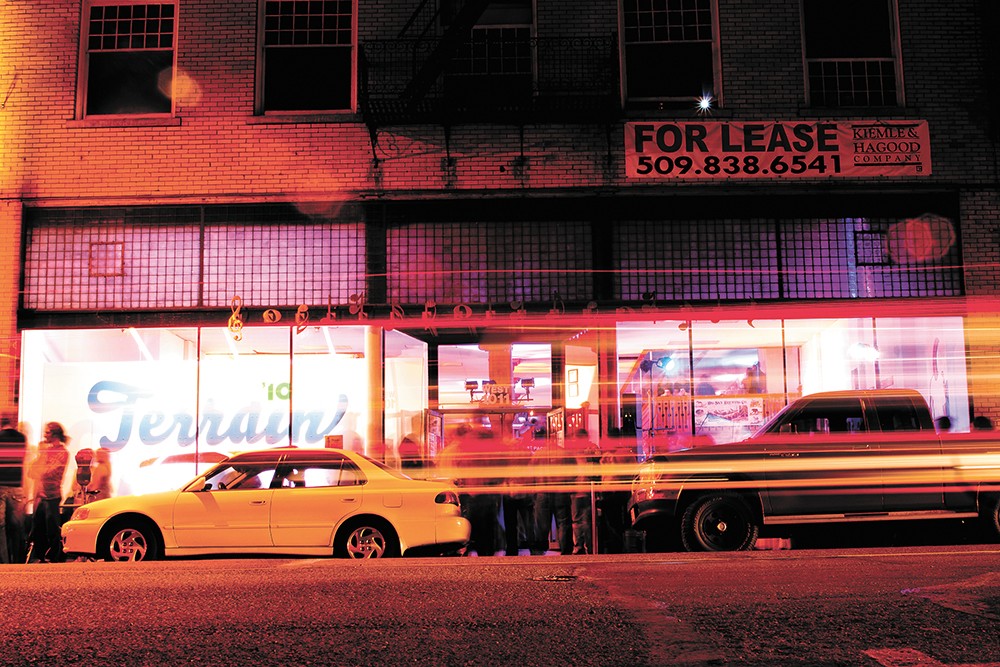 Cameron Couch
A scene from Terrain past.

Now in its 10th year, the one-night-only celebration of local art and music is still expanding beyond its flagship event. It has a permanent art gallery in the downtown Washington Cracker Co. Building, and its four primary organizers — Baumgarten (a former Inlander staffer), Ewing, Patrick Kendrick and Diego Sanchez — are also involved in the annual art marketplace Bazaar, as well as Window Dressing, which transforms downtown storefronts into makeshift art spaces.

Reflecting on what's changed since 2008, the folks behind Terrain admit they're feeling a bit nostalgic as year 10 rolls around.

"We've been doing a lot of reflecting," Ewing says. "In thinking about the look and the feel of the event and the narrative we want to tell, it's been introspective looking through the years. And we want to celebrate that, and also have a dialogue around that — as a community, where were we at then and now ... and what has Terrain's impact been?

"It's looking back, but it's also looking forward."

As Terrain has grown, so, too, has Spokane's art scene.

The organizers describe it as an embarrassment of riches, offering up popular events that might not have ever gotten off the ground even five years ago. People are also taking local art more seriously, it seems, and the level of professionalism that has come to define Terrain every year is seeping into other endeavors.

"I remember a time about three years ago when I was finding it really hard to keep up with all the rad events I wanted to go to, and feeling torn," Ewing says. "I had to let go, and say this is a good thing that I can't keep up."

"It used to be there'd be a cool event or two a week, and now there's multiple cool things almost every night," Baumgarten says.

"The turnover on [music] venues has lagged a lot," says Kendrick, who also books the bands for Terrain and Inlander's Volume music festival. "They're seeing a lot more success. Even in their employee turnover — they're hiring, not firing."

One of the keys to the organization's success, Ewing says, is that they're working hard to demystify art. She hears it all the time — "I'm just not an 'art' person" is a common refrain — and she hopes that Terrain is a kind of gateway event for those who might be overwhelmed by a traditional gallery showing.

"Art can be scary," Ewing says. "Oftentimes you're told that if you don't have an art history degree, or you don't know the punk scene of the '70s, or whatever it happens to be, then you can't engage with it. We've tried really hard to say, 'Yes, you can,' and to break down those barriers and break down those expectations.

"The more people experience something they might not typically identify as art, and they enjoy themselves, the more we grow as a community." 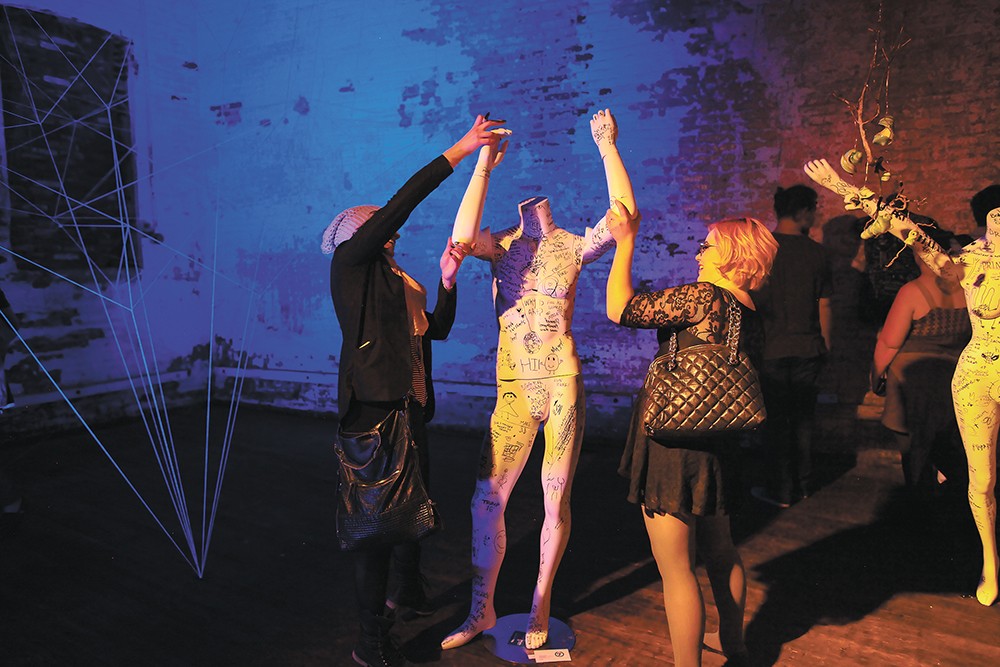 Kristen Black
Interactivity at a Terrain from the past.

This year promises a couple of new twists on the trusted Terrain formula.

In addition to the standard, single-day event on the first Friday of October, there will be a ticketed event the previous Thursday, which will not only bring back bands that have played before, but will allow those who pay admission to get an early look at the year's showcased art.

Another change: It will be held this year at the Jensen-Byrd Building, which was recently purchased by Washington State University as a prospective addition to the school's downtown campus. This will be the fourth location to host Terrain: After that first year, Terrain moved to the Music City Building on W. First, where it remained until transferring to the Washington Cracker Co. Building in 2014.

And what will have ideally changed in a decade, assuming Terrain is still an annual occurrence?

"If we were doing the same thing 10 years from now, I'd still be happy with it," Ewing says. "It's almost like an adrenaline shot of being really stoked on your community, and you take that energy and go create for the rest of the year, then you come back and do it over again." ♦