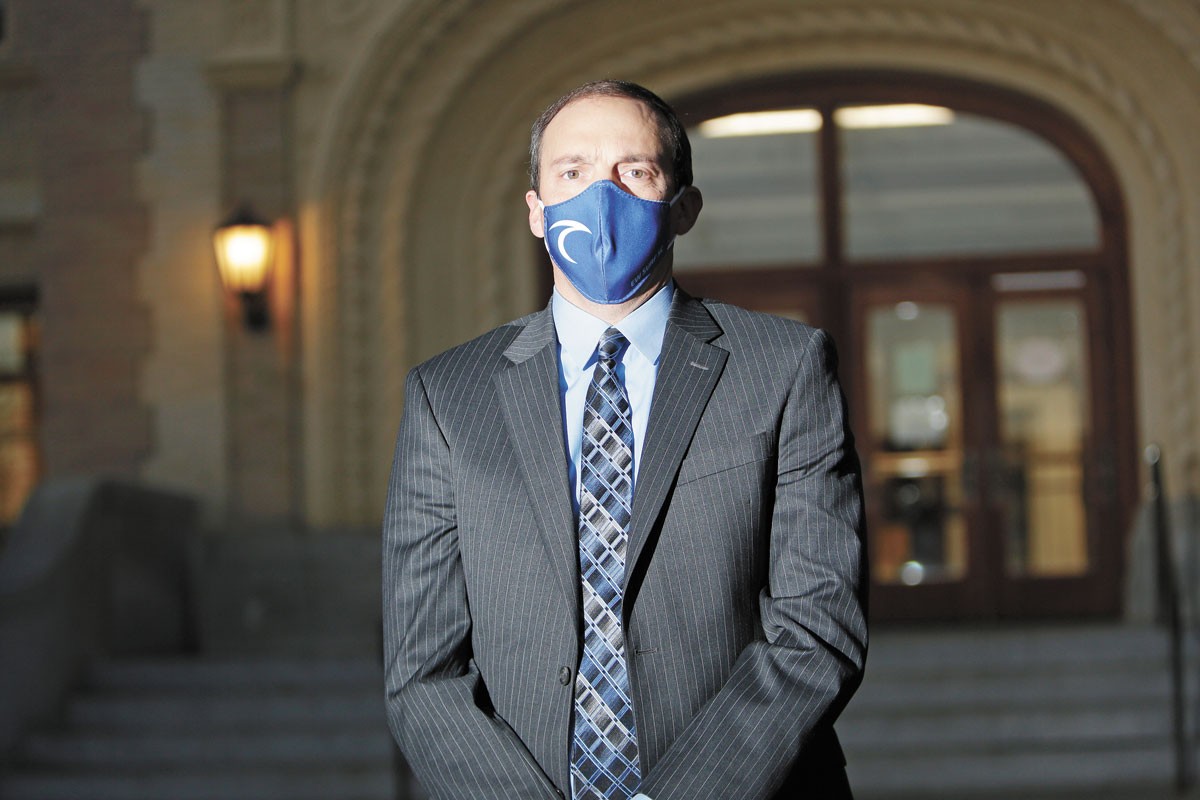 The way Spokane County Commissioner Al French tells it, state Rep. Marcus Riccelli was explicit about his plans when he pitched him on a bill to remake the county board, expanding the number from three countywide commissioners to five district-elected commissioners.

"Before he floated the bill in 2017, he and I had breakfast down at Perkins," French asserts. "He told me straight to my face: He wanted to run for county commissioner."

He says it with the tone of reciting an obvious fact that, of course, everybody already knows.

"I have never expressed to Al French that I am running for county commissioner," he chuckles. "He's not telling the truth."

Still, while plenty of people have asked him if he's going to run for commissioner, in some ways Riccelli holds more power now to influence county affairs than if he were a commissioner.

Sure, commissioners like French may dominate the state of play in the county on the surface. But Riccelli has been shifting the ground beneath the playing field — rewriting rules and redefining boundaries — that could change how the political game is played in the region for decades.

He's passed or proposed legislation aiming not just to reshape the board of county commissioners itself, but the health board and local transportation agencies.

Yet Riccelli's actions have frequently put him on a collision course with French, who portrays these bills as reckless power plays rather than solid policy.

"I want to have a good relationship with Commissioner French," Riccelli says. "I want to work on things. I just think he's out of sync with what my constituents want right now."

THE RULE OF FIVE
The last, best hope for French to stop Riccelli's changes to the county board died this past Tuesday.

The Washington state Supreme Court had already unanimously swatted down a lawsuit, driven by French and the Washington State Association of Counties, to overturn Riccelli's 2017 bill expanding the county commission.

French's final move? Convince his fellow commissioners to put a "freeholder process" on the April ballot, asking voters to pick a team of citizens to quickly write an entirely new charter that would override Riccelli's law before it takes effect in 2022.

But the other commissioners, questioning the cost, timeline and lack of citizen demand for such a process, nixed his plan to put the freeholder process on the ballot directly.

"They wanted to force me to collect 29,000 signatures in a climate of pandemic, where that kind of conduct is not only not allowed by the governor, but it's not safe," French says.

Riccelli, meanwhile, was "very pleased" that French had been "rebuffed." He argues that five commissioners could better deal with the workload to manage a county of over 500,000 people and that, by electing them by district, voters would get more responsive commissioners.

"It brings representation closer to the people," he says.

Still, instead of passing a purely partisan bill, Riccelli managed to recruit a sizable contingent of local Republican allies, including even famously combative far-right Republican Rep. Matt Shea, to back his bill.

Rep. Mike Volz, a Spokane Republican and co-sponsor of the legislation, argues that Republicans made the bill better and that he agrees with its central idea.

"The county is fairly diverse, we have from farm lands to downtown Spokane, to the valley. economically and socially and politically, there's diversity," Volz says. "The board should reflect that."

But French sees more political calculation — arguing that the GOP legislators might also be envisioning running for county commissioner, a job where the salary is a lot better and the commute is a lot shorter.

Of course, how the new commission boundaries are drawn could end up effectively making it impossible for French, who currently represents the most liberal district of the three, to win another term.

But French dismisses that possibility, arguing his passionate opposition is about honoring voter intent. In 2015, Spokane voters explicitly rejected an initiative to move the county to five commissioners.

Still, even if the new makeup of the board doesn't topple French, it's sure to dilute his influence. And to Riccelli, that's just another upside of his proposal.

"It will bring more voices to the table," Riccelli says. "Right now I do believe that there is one voice there that is wielding more power than is proportionate."

MEDICAL INTERVENTION
French was one of the members of the Spokane Regional Health District board who enthusiastically backed district administrator Amelia Clark's recent decision to fire Dr. Bob Lutz, the county's health officer, during the pandemic. And French was the person who handpicked Lutz's replacement.

Watching the public health board drama unfold from a distance, Riccelli was outraged.

"What I saw and the rest of the community saw is that it was not a health-care-driven decision," Riccelli says. "That was a decision that was done recklessly and without concern to our community being in a COVID crisis."

And so Riccelli has reacted by drafting a new bill: Right now, the health board is composed almost entirely of politicians. His bill would require that there be just as many public health professionals on the board as elected officials.

French counters that since Riccelli hasn't served on the board, he doesn't know what he's talking about.

"His lack of knowledge has never interfered with his ability to do legislation," French says. "You don't rebuild the engine without knowing how the engine works."

For his part, he denies that Lutz's firing was political.

"Who appointed Bob Lutz to the health district?" French says. "Me. I appointed him because of his credentials, even though I knew that, politically, we didn't align."

When the pandemic hit, French, Lutz and Sheriff Ozzie Knezovich were the triumvirate leading the Emergency Operations Center to respond to the virus. And French strenuously disagreed with some of Lutz's decisions. French accuses him of unilaterally deciding to implement expensive programs — like building an isolation center — without conducting any kind of fiscal analysis.

"It was the Bob Lutz Show, and the rest of us were just a cast of characters," French says. "And of course he didn't have to worry about paying any of the bills."

French didn't suffer quietly. Starting around April, French says, he complained about Lutz for months to health district administrator Amelia Clark. And when Clark asked for official board approval to fire Lutz, French publicly agreed that Lutz was insubordinate and argued that the health officer had deeply undercut his authority by attending a Black Lives Matter rally in defiance of lockdown restrictions.

Though French claims that he would be just as horrified if Lutz showed up at a Trump rally, Riccelli cites the episode as an example of how infected with politics these boards could be. Riccelli defends Lutz's attendance at the rally.

Balancing the board makeup with actual doctors or nurses, he says, is just the beginning.

He's also been ruminating about a more "transformational" change to public health districts that would guarantee a funding source for the districts and have health officers answer to the state health secretary instead of a local administrator.

"Health care trained professionals should be not only at the decision table, but heavily influencing the direction of our public health," he says. "We should let science lead, not politicians."

"My point to Al is: Work collaboratively. Don't try to wield power with a heavy hand. Let's do what's best for the community."

TURF WAR
By now, changing who gets to sit on local boards has become a habit for Riccelli.

"There's absolutely a trend that's been there," says Commissioner Kerns.

Not only did Riccelli support state Sen. Andy Billig's 2018 bill that handed more voting power on the Spokane Transit Authority board to the city of Spokane, last year Riccelli passed legislation guaranteeing tribal representation on the Spokane Regional Transportation Council.

In both cases, it impinged on French's turf. "I bleed public transportation," says French, who in both cases bristled at the changes. He argued that cutting back on the influence of smaller towns on the STA made them less likely to support transportation projects and that it made more sense to wait until after the census, when all interlocal agreements would be reassessed, to add the tribes to the Regional Transportation Council.

"It sounds like what Marcus wants to do, he wants to run the [Transportation Council] board instead of having the jurisdictions run it," French told the Inlander last year.

But considering how long the tribes had been waiting for inclusion, asking them to wait longer "borders on disrespectful to our tribal partners," Riccelli argues.

"My point to Al is: Work collaboratively," he says. "Don't try to wield power with a heavy hand. Let's do what's best for the community."

But French sees all of these moves by Riccelli as mere "preludes to him running for county commissioner."

French even begins to offer to bet the Inlander $100 that Riccelli would run before he stops himself, noting that betting on that sort of thing is illegal in the state of Washington.

Riccelli says he hasn't told anyone that he's going to run for county commissioner in 2022. Yet, when the Inlander pressed him to promise he wouldn't run, he declined, saying he was merely "interested in doing the job" he was "just recently elected" to do.

When the Inlander pointed out that sounded a lot like a politician-style dodge, Riccelli acknowledged at least a scintilla of interest in the position: "I guess I would say, I wouldn't rule it out." ♦