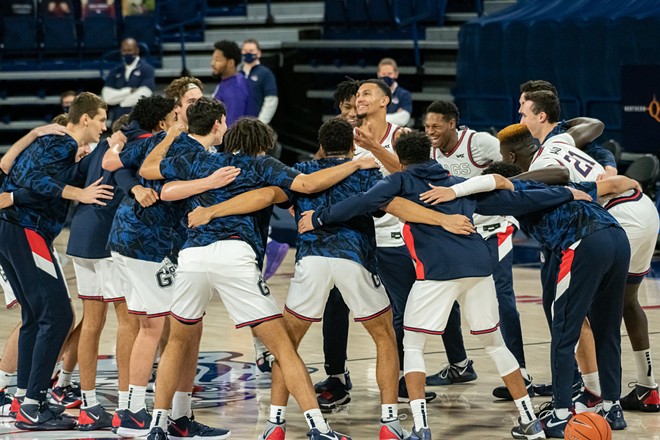 Is an undefeated season in the realm of possibility for this year's Zags? Yup.

If ever there was a time for this year’s Zags to slip up, Monday night in Provo for the rematch with BYU was it. The Cougars are the second best team in the West Coast Conference and they’re a respectable 4-6 against Gonzaga in rematch games over their 10 seasons in the league. But the Zags got it done 82-71 against the Cougars and improved to 19-0 on the season.

With that stumbling block now situated firmly in Gonzaga’s rear view mirror, it feels like a good time to start looking at some bigger picture stuff. The sort of stuff you might not want to say just in case you jinx it — fingers crossed that’s not what happens here.

LONGEST STREAK IN THE NATION

You have to go back to March 25, 2016, to find the most recent game Gonzaga played as a team not ranked in the AP Top 25. It was the Sweet Sixteen and the 11-seed Zags had upset their way to face another underdog, the 10-seed Syracuse Orange. Syracuse came out on top, 63-60. That year’s Gonzaga team began ranked No. 9 in the preseason poll, but a season-ending injury to Przemek Karnowski after just a handful of games derailed the team. It took until March for them to get things rolling again.

They haven’t stopped rolling since.

Over the 90 straight weeks Gonzaga’s been ranked in the AP Top 25 they’ve spent 25 of them ranked No. 1, including all 12 weeks so far this season. 73 of those 90 weeks have had the Zags ranked among the Top 10, a streak that now sits at 57 weeks and counting. Most importantly, the Zags have lived up to their billing as a ranked team, compiling a 152-13 record over that span.

Efficiency is the name of the game these days in the basketball world. Points and rebounds, those are cool. Shooting percentage and minutes played, they’re fine too. But it’s efficiency, how many points a team scores or gives up on a per-possession basis, that the real stat-heads crave. And boy, do the Zags give it to them in an efficient manner.

Almost as efficient as any team ever has.

After Monday’s 82-71 win over BYU, the Zags’ adjusted efficiency margin on KenPom.com —the Bible for college basketball statistics— jumped to +35.47 for the season. That means, against a hypothetical but statistically average Division I opponent, Gonzaga would be projected to score 35.47 more points than their opposition over the course of 100 possessions.

The issue with advanced stats like this is that you can’t make sweeping historical claims about them. Because they didn’t exist when James Naismith invented the sport or when John Wooden was leading UCLA to unrivaled dominance in the 1960s and '70s. Unfortunately, the most complete records only go back about 20 to 25 years.

Which means we can’t say this is the most efficient team in college basketball history.  That’s because Kentucky’s adjusted efficiency margin of +36.91 from the 2015 season probably holds that honor. But Gonzaga’s margin of +35.47 is the second best in the KenPom database, which stretches back to the 2001-2002 season.

What the Zags have done this season puts this year’s team among the all-time greats that the sport has ever seen.

Now for the thing I probably shouldn’t say because I don’t want to jinx it, but considering how elite Gonzaga looks there’s little risk of that happening. Especially since the BYU game is now behind us.

As it stands on Tuesday morning, the Zags’ remaining schedule includes the following games: February 13 at San Francisco, February 18 versus Saint Mary's and February 20 versus San Diego. That’s it.

The odds that Gonzaga plays just three games between now and the NCAA Tournament, which is over a month away, are incredibly slim. The West Coast Conference has been ravaged by COVID-19 in recent weeks, with last week seeing fully 50% of the league’s teams hit the pause button on their seasons. That led to a rash of postponements and cancellations, some of which will certainly be made up, including games involving the Zags. Plus, there’s always the chance that the Zags can throw together a non-conference game or two between now and Selection Sunday. Oh yeah, and there’s allegedly going to be a conference tournament, too, but Mark Few expressed some curiosity about how that would go down while being interviewed on SportsCenter after Monday’s win.

So, the Zags are three games away from an undefeated regular season. They’re probably five or six games away, when it’s all said and done, but for now they’re three games away. Every significant hurdle has been crossed. The Zags have history in their grasp, at this point they just need to hold on to it.