Not questioning the Bill of Rights, MLK in stone, protesting docks and police accountability. 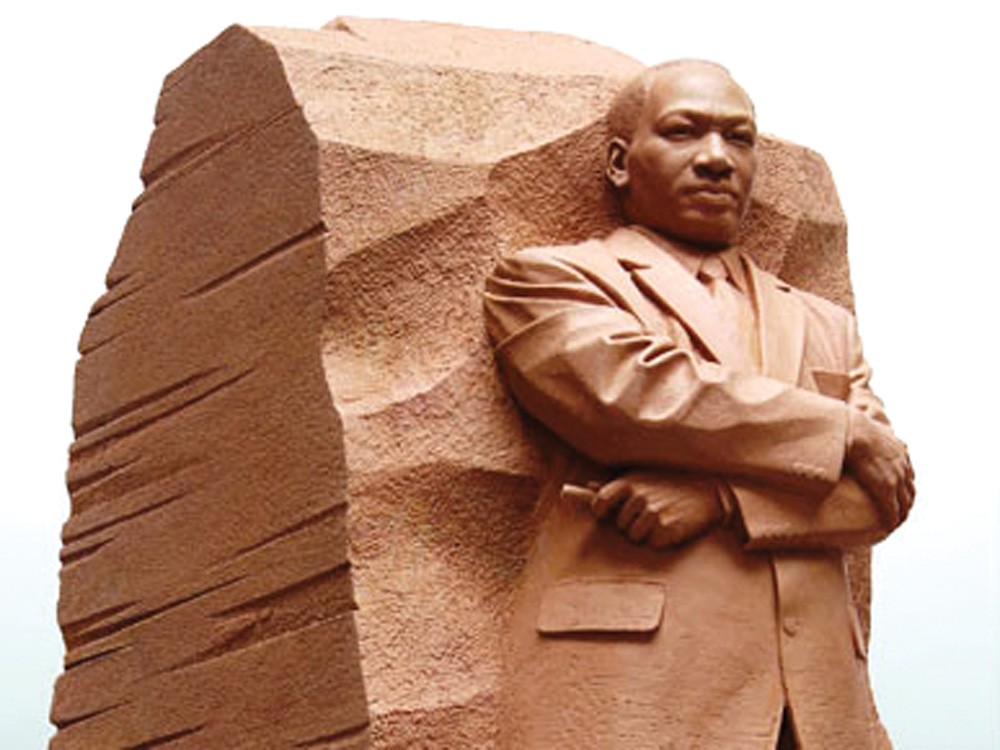 A Martin Luther King, Jr. memorial to be unveiled in Washington, D.C.
Last week, the judge presiding over the trial of Kevin Harpham — who is accused of planting the bomb in downtown Spokane during the MLK Day parade — delayed the trial so the jury wouldn’t be influenced by a King memorial being unveiled in D.C. around the same time.

The trial was to start on Aug. 22, but it has been moved to Sept. 12. The dedication of the memorial — a stone monolith with the likeness of King emerging from it — will take place on Aug. 28. (Nicholas Deshais)

In its first go-around in 2009, Envision Spokane’s Bill of Rights appeared on the ballot with two “advisory questions” from the Spokane City Council. Voters were asked to decide whether services should be cut, or whether taxes should be raised if Envision’s progressive plan were to cost the city money.

Envision complained that the additional measures prejudiced voters against the initiatives. Back then, the majority of the Council voted to put the advisory questions on the ballot. (Only Councilman Richard Rush voted against putting both on the ballot.)

But this year, things have changed. With Envision putting a very similar — though stripped down — measure on the ballot, the Council this week decided against putting the same advisory questions on the ballot, which was proposed by Councilwoman Nancy McLaughlin.

Whether that will result in more votes for the Community Bill of Rights remains to be seen, but Envision Spokane is optimistic.

“Not having [those questions] on the ballot will certainly have more ‘yes’ votes go our way,” campaign manager Kai Huschke says. (Daniel Walters)

In 2005, developer Cliff Mort bought 60 acres of land in Spokane Valley above Upriver Dam to build the Coyote Rock development. On the 30 acres of waterfront property, he planned to put in 30 docks.

More than a year ago, the state Department of Ecology — backed by the Spokane Riverkeeper, the Spokane Falls chapter of Trout Unlimited and the Lands Council — appealed Spokane Valley’s decision to grant permits for two docks, saying they would impact habitat of the native redband trout. A judge rejected this argument.

This Sunday, Aug. 21, at noon, Spokane Riverkeeper Bart Mihailovich is holding a “No Docks at the Rock” protest and party, featuring prizes, games and rafting, to kick off an entirely new lawsuit against the docks at Coyote Rock, this time challenging the state’s Department of Fish and Wildlife.

“We figure we’d do some type of demonstration to raise some sort of awareness,” Mihailovich says.

Two weeks ago, a battle emerged from Spokane City Hall over a recent decision to strip independent investigative powers from the Office of the Police Ombudsman.

On one side was Council President Joe Shogan, who said a recent decision by a state arbitrator taking the power away should not be questioned. On the other side was Councilman Richard Rush, who wanted to appeal the decision, saying, “We need a definitive answer why the community can’t have the police oversight that they’re seeking.”

This Monday, you can join in the debate as the Council discusses both Shogan’s and Rush’s ways forward. (Nicholas Deshais)