From classy to casual, the Inland Northwest has a steakhouse to suit your fancy 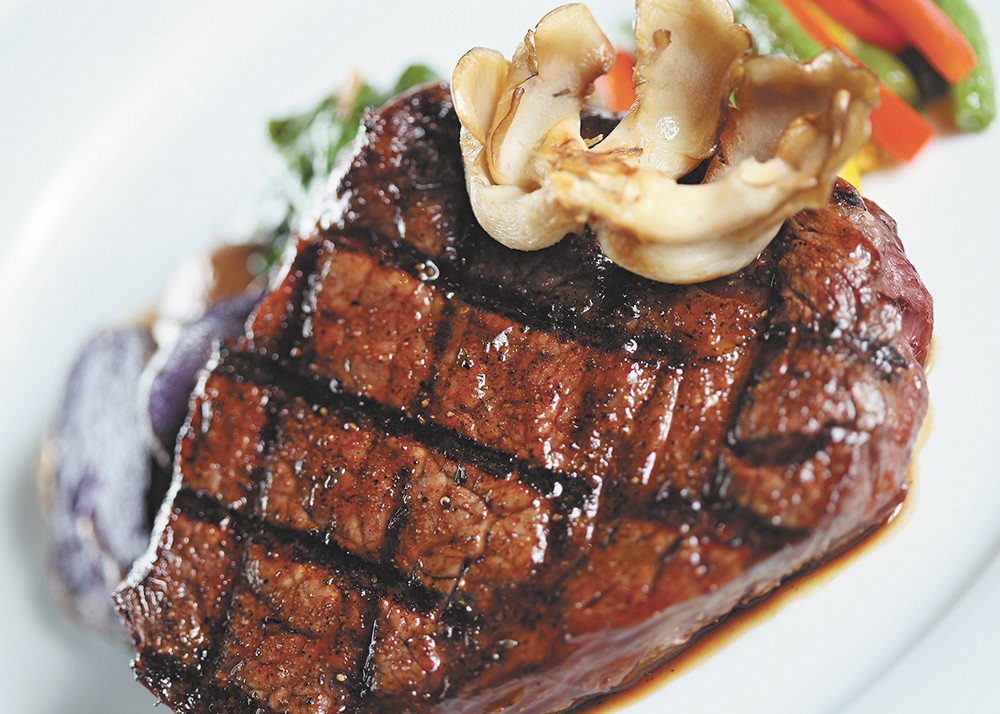 Young Kwak
A bison ribeye is perfectly prepared at Masselow’s.

Churchill's Steakhouse Churchill's is the perfect place to take family, a date or just enjoy an incredible steak. This Chicago-inspired dining experience combines in-house carves of USDA Prime beef with seamless service, making it easy to keep Churchill's at the top of your list for any celebratory dinner. We also love sneaking away to their downstairs bar for a drink in one of the tucked-away booths. 165 S. Post St., Spokane • Wash. • 474-9888

Grille from Ipanema Although Grille from Ipanema has a buffet-like format, the atmosphere is high-end, emphasizing good service in an upscale environment. Roomy seating areas are designed to encourage a long, leisurely meal, whether indoors or outside on the patio, where you won't get a view of the Rio de Janeiro beachfront at this Brazilian-style steakhouse, but you will get an eyeful of still-impressive Lake Coeur d'Alene.  601 Front Ave., Coeur d'Alene • Idaho • 208-676-1122

Hydra Steakhouse Hydra has been a Sandpoint gathering place since 1975. It continues to produce reliably priced and tastily cooked steaks, including its well-known, baseball-cut top sirloin. If beef isn't your game, that's fine. The Hydra also has a full seafood menu, in addition to pasta, sandwiches and other options. 115 Lake St., Sandpoint • Idaho • 208-263-7123

Masselow's Steakhouse Masselow's, named after a Kalispel Tribe chief who led his people more than a century ago, rebranded last year with a focus on prime steaks and a more accessible feel. That might come as a surprise to some who know Masselow's as one of the region's most high-end, respected restaurants, earning a four-diamond rating from the AAA. While the white linens are gone, about half of the former Masselow's menu remains, and there are still seafood and other options to be found. Northern Quest Casino, 100 N. Hayford Rd., Airway Heights • Wash. • 481-6020

Spencer's for Steaks and Chops Tucked off the street behind the Doubletree Hotel and the Spokane Convention Center, Spencer's has served up prime views of Riverfront Park and the Spokane River for more than 15 years, along with its menu that runs the gamut when it comes to steakhouse food. Spencer's meat entrées — rib-eyes, filets, pork chops and more — are all prepared in the restaurant's 1,600-degree infrared broiler, ensuring that the prime-cut meats stay juicy and tender. Doubletree Hotel, 322 N. Spokane Falls Ct., Spokane • Wash. • 744-2372

Wolf Lodge Inn Steakhouse The Wolf Lodge Inn Steakhouse may be out of the way, but you'd be hard-pressed to find an Inland Northwesterner who doesn't think it's worth the drive. Go for the simple, classic steaks; return again and again for the friendly service and quirky Wild West atmosphere. Start your meal with creative appetizers like the beer-batter-dipped fried mushrooms ($8). Don't fill up too much, though; the steaks are so big it's not unusual to share. The classic 32-ounce Rancher ($46), half center-cut top sirloin and half rib-eye, is legendary.  11741 E. Frontage Rd., Coeur d'Alene • Idaho • 208-664-6665