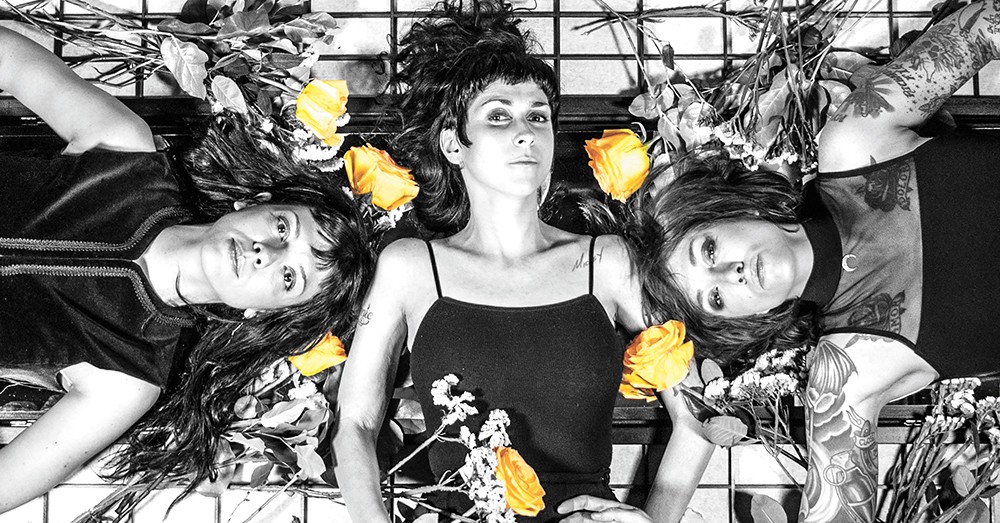 For one, the self-taught drummer has developed a distinctive, infectious style that stands out among her fellow bashers prowling the club circuit. Her signature injection of a disco-like groove into a raw slab of punk angst is one of the elements that gives her band, the Coathangers, a unique sound.

Secondly, the Atlanta native takes her musicianship up a notch by adding a matchless voice to the mix. Whereas her bandmate Julia Kugel handles the high notes, Luke brings a bite to the lower sector with a beautifully potent roar.

Then, there is the the proverbial X-factor — the third threat — in Luke's makeup, which is her no-nonsense, bubbly, "let's just party" character. She cusses like a sailor but is probably excited to give you a hug.

With her mates Kugel and bassist Meredith Franco, Luke is touring the West Coast in support of the Coathangers upcoming LP on Suicide Squeeze Records, The Devil You Know.

Exploding out of Atlanta in the mid-2000s, the Coathangers have gone from a quirky punk-rock outfit playing house shows to an internationally recognized combo. Through years of touring and cranking out releases each year, the band has created a monster much more powerful and threatening than what many of the "psych-lite" contemporaries have developed.

Luke's risk-taking behind the kit and ferocity behind the mic pays off on The Devil You Know. After solidifying a distinctive sound on the previous two full-length studio albums, Suck My Shirt (2014) and Nosebleed Weekend (2016), the band continues its ascendence into crafting spectacular anthems, playing to each members' strengths. Luke and Kugel reprise their beautifully contrasting vocal styles in duet form on a lot of the new tunes as opposed to trading off lead duties on a song-by-song basis. Luke's raspy growl serves as the perfect complement to Kugel's fearless primal high-end range. The album's first single and opening track "Bimbo" is a sturdy, up-tempo pop hit that flirts with Hüsker Dü-like heartbreak. Kugel's peaceful, piano-backed melody is washed away by Luke's rainstorm of a chorus that projects regret towards a romantic endeavor.

The vocal pairing goes even darker than a traditional soprano-contralto marriage. On "Crimson Telephone," the trio channels the Scientists' acid years, most notably with Franco's glazed-yet-chunky bass line yielding only to the song's turbulent changes — transmutations Luke and Kugel embrace.

"[The Devil You Know] is kind of a mash-up of the production level of Nosebleed [Weekend] but it has the vibe of Suck My Shirt," says Luke. "There's a punk-rock aesthetic that we have, of course, but we've also got some really weird tracks on it. Every album that we write, we push ourselves to not write the same song over and over again."

"Hey Buddy" fits Luke's assessment of a new cut that doesn't fit the traditional Coathangers mold. In fact, if it wasn't Luke's voice to enter the realm after a few measures, most people would understandably anticipate Mick Jagger's 1969-era howl to come forth and comp the rhythm section. Lyrically, Luke's message is quick to shame those who seek to disrupt social progress or belittle injustices.

"We all came to the table with songs, melodies and lyrics," says Luke. "We didn't put a lot of pressure on ourselves. We just wanna write this f---ing album, and if people like it, they like it. If they don't, they don't. Because sometimes you can psych yourself out and the songs can be overworked."

According to Luke, most of the album was written at the band's practice space in Long Beach, California (which has become the makeshift West Coast home for the band now that Kugel resides there). The rest of the material was, unsurprisingly, written on the road because the three are virtually always en route to a gig. The Coathangers' growing success over the past decade can be credited in part for the trio's willingness to "get out and play" no matter how grueling the traveling may be. And for Luke, the relentless itineraries are welcomed with open arms.

"I personally love touring," she says. "I'm good at touring, I'm good at playing live shows, I'm not good at very many things. I just f---ing love it. I love talking to different people and seeing other bands and being in a different city every night. I love that shit. It's difficult to a certain extent but it's also the opportunity of a lifetime. If I wasn't in this band there's no way in hell I'd be able to travel around the world. It's insane. I'm a college dropout [laughs]."

Finding a downside to road life is difficult for Luke, but she admits potato chips can only satisfy for so long. "I miss eating meals the most [laughs]. I like eating food. But I look great on tour, very model thin [laughs]." ♦ 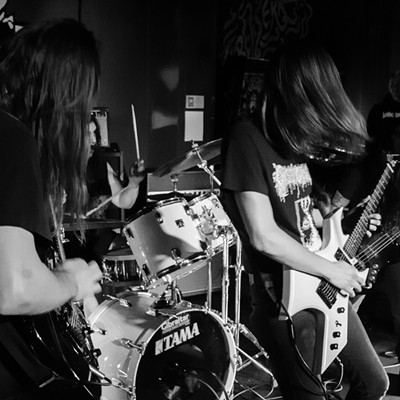