Stick a Needle in My Eye

A relatively new treatment for macular degeneration may look painful — but for many, it’s worth a shot 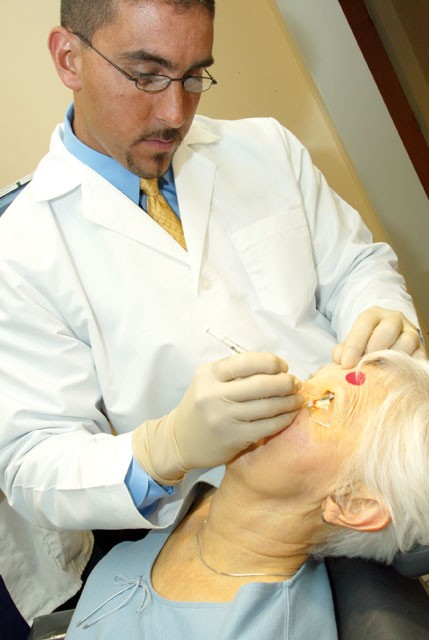 Thanks to new applications of drugs like Lucentis and Avastin, people with macular degeneration have new hope.

Gerry Boston isn’t good with faces. It’s not that she can’t remember them — her 85-year-old mind’s still razor sharp. It’s that she can’t see them. Her peripheral vision is fine, but the center is a muddled blur.

Her ability to recognize — and to read and to drive — has been impaired. She can’t even see her own face in the mirror.

For 69-year-old Wayne Boyles, the discovery came staring at his alarm clock with his right eye. The numbers were bright, red and glowing, but to Boyles, the whole clock looked black. It got worse.

“I would close my left eye, and there would be a big black spot covering most of my left eye. I couldn’t even read that big ‘E’ on the charts,” Boyles says. “I looked at a telephone pole, and it looked like it had a big bend in it, like an S-shape.”

Both Boston and Boyles suffer from macular degeneration. In developed countries like America, it’s the most common form of vision loss among retired people.

Glasses can’t help. That’s because the problem isn’t with the lens of the eye, it’s with the film — the retina. As people age, the center of the retina (or macula) naturally begins to be plagued by drusen, small yellow clumps of extracellular material. If the drusen grow too numerous, they can clog the flow of oxygen and nutrients, and the macula begins to deteriorate. Think of a lawn, says local retinal specialist Dr. Robert Wirthlin, with the retina as the grass. The drusen are rocks lodged in the soil, preventing the roots from getting the nutrients they need. With too many rocks, the soil turns to sand and the grass turns brown.

If you think of the retina as grass, Wirthlin says, these abnormal blood vessels are weeds.

When the blood vessels leak, it can cause blurring — like for Boston — or distortion and blind spots — like for Boyles.

Until recently, the more dramatic treatments carried major limitations. From the 1970s until 2000, the only option was using a thermal laser to burn away the blood vessels. The problem? The laser would also permanently burn away part of the vision. A technique introduced in 2000 that flooded the retina with a photoreactive dye and then exposed it to light was also flawed, Wirthlin says. It destroyed many good vessels along with the bad.

But in the last decade came a breakthrough. Today, doctors inject a drug called Lucentis (or its cheaper relative Avastin, a drug developed for cancer treatment that hasn’t received FDA approval for macular degeneration) directly into patients’ eyes.

Wirthlin says it’s quick and painless, though Boston and Boyles both report degrees of irritation.

Lucentis inhibits the abnormal blood vessels from ever forming, without any collateral damage. Over a few weeks or months, the damaged blood vessels shrink to a scar.

“That’s the revolutionary breakthrough,” Wirthin says. In about one-third of cases, the march of vision loss won’t just be slowed — it will be reversed.“It’s done wonders for me,” Boyles says. “I went from being blind in my right eye … to being able to see 20-20 with my glasses.”But it’s no panacea. For Boston, the shots may have slowed the degeneration, but her vision’s still slowly getting worse. She’s turned from hoping for a cure to coping with reality.

Lilac Services for the Blind offers those with macular degeneration everything from magnifying glasses to talking alarm clocks.Boston sits at a table with her daughter at Lilac Services, going over her options.  “I’m learning to use more and more magnification,” she says. “I carry [a magnifier] in my purse. I have one on my computer kitchen table. I learn to listen to my books.” She’s also interested in grabbing a phone with a giant touchtone pad, so she can see the numbers when dialing. For Boston, being able to maintain her energetic self-sufficient lifestyle is important.

She’s very active,” Keiper says about her mother. “She still goes on the zip-line with us on the family vacation.”

“Whooshhh!” Boston says as she imitates a ride on the incline pulley, showing she has no intention of allowing her vision challenges to interfere with enjoying life to the fullest.