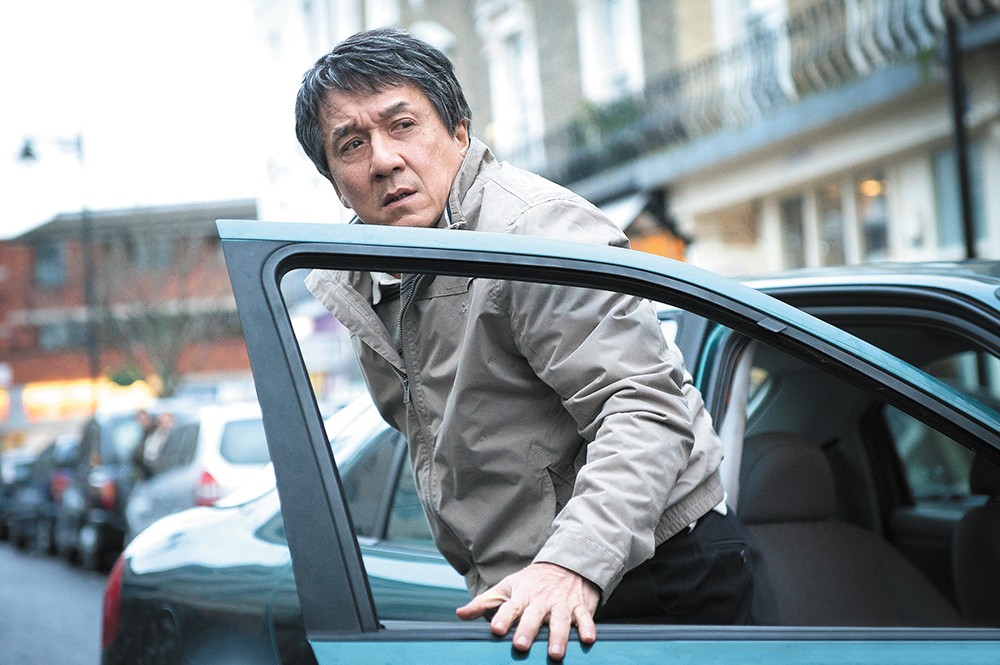 Rumble in the Bronx, this ain't: Martial arts legend Jackie Chan tries his hand at dark drama in The Foreigner.

Physicality has always been the core of Jackie Chan's performances.

Over the past 40 years, he's built a reputation as cinema's premiere stunt star, and almost inarguably the top physical comedian in the post-silent-film area. But the hyper-serious world of The Foreigner challenges Chan to do something he's seldom had to do before: act. Like, really act. Act with subtlety.

Within the film's first few minutes, a terrorist bombing in London randomly kills the daughter of Chan's character, immigrant restaurateur Quan Ngoc Minh. In shock, Chan taps into dark emotional places without many words spoken. He's awash with pain, holding her lifeless body amidst the smoldering rubble. He feels like a ghost drifting about the now too-quiet emptiness of his daughter's room. It's not the first time he's dealt with loss, as his dark past slowly reveals, but Chan quietly conveys that he's finally fully broken. And a broken man has nothing to live for but revenge.

A rogue faction of the Irish Republican Army claims responsibility for the terrorist bombing, and Quan wants the names of those responsible. He hounds everyone until he gets to Liam Hennessy (Pierce Brosnan), a philandering Northern Ireland politician who's ex-IRA. Brosnan pulls off the line-toeing power and unease of the role with a slick, confident authority. It's unclear how much Hennessy, who's trying to placate both British officials and his Irish comrades, actually knows, but Quan is a man possessed, and he won't take no for an answer.

While the 63-year-old Chan isn't the spry human rag doll he once was, his action scenes still pop off the screen. Quan combines elements of Jason Bourne, Taken's Bryan Mills and MacGyver to terrorize the terrorist elements. He often employs makeshift explosives and booby traps, rather than simply running into a fight. An excellent escape from an inn scene allows Chan to display his nimble mix of hand-to-hand combat, crafty movement and stunt falls. Much of Quan's action is close combat, and the speed and power of Chan's movements don't seem to have lost much over the years.

The soft twist is that the film's actual story has little to do with Quan. He's almost more of a background character in a complicated political plot about the IRA's terrorist attacks. And there are a lot of layers to it, including long-held IRA loyalties, bartering for information with royal pardons, extramarital affairs, and a whole messy web of double-crosses. It's almost more Hennessy's story, with Quan serving as the seemingly unkillable horror movie monster, always lurking in the shadows and picking stooges off one by one.

While the bursts of action provide enough adrenaline, the film's inconsistent tone hampers the proceedings. The Foreigner takes itself very seriously, which would be fine if it didn't occasionally lapse on that front. About midway through the movie, Quan's unrelenting refrain of asking Hennessy for "names" shifts from being intimidatingly persistent to a line that (seemingly unintentionally) elicits laughter.

And while most of the film maintains a grounding in plausibility, the actions of law enforcement in a few key moments come off like sudden swerves into 24-level, over-the-top action-movie nonsense. At one point, British authorities agree to a plan to catch the terror suspects by waiting until the next bombing (hoping to root out the rogue IRA leader via a code word they hope the terrorists will deliver to the press). Later, when they have a suspect incapacitated, the authorities extract vital info needed within minutes via battery shock torture (and an even more absurd ending).

Piggybacking on the highly suspect "look how efficiently torture works" angle, the moral compass of The Foreigner is wildly inconsistent. Beyond sketchy cops, Quan's quest for vigilante justice is highly problematic. Over the course of the film, he lets killers walk, fouls up sound law-enforcement plans, removes the leverage of the UK government over the IRA, and unknowingly almost allows another terrorist bombing because of his thirst for vengeance. His independent actions have serious consequences, but there's no acknowledgement that anything he's doing is potentially questionable.

Seeing Chan back in action delivers a decent supply of thrills, but ultimately The Foreigner tops out as a decent, run-of-the-mill action flick, with the real fun swapped out for a failed attempt at gravitas. ♦

The Foreigner is not showing in any theaters in the area.