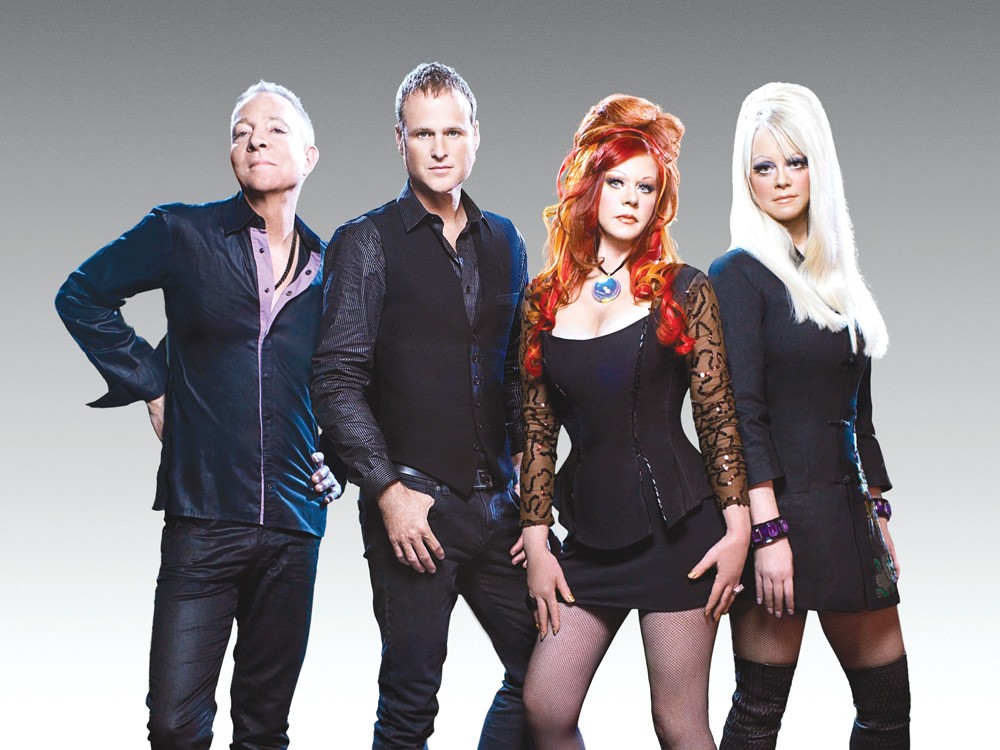 The year was 1979. America was a little hung over and kind of bummed out — post- Nixon, post-Vietnam, post-disco. The music reflected it, too — angry punks from London were resonating, Pink Floyd did a double-album about going insane and some Aussie misfits told us we were on a “Highway to Hell.” It was getting pretty heavy.

Then, right in the middle of the last summer before the ’80s dawned, it hit. In record stores it appeared as a garish billboard of yellow, featuring a bunch of thrift-store hipsters who looked like they were auditioning for a John Waters movie. On the radio, it came at you with those iconic guitar licks, opening into a pounding percussion party, and then came some absolutely daffy lyrics. The song was “Rock Lobster,” the band was the B-52s and America finally cracked a smile. And shook its collective booty.

Good news, people: “We’re still at it,” laughs Cindy Wilson from her home in Atlanta. She and the rest of the original members are coming to Spokane Monday night. “I’m still having a great time out there, and it’s a good vibe with the crowd. We’re bouncing energy off each other.”

And that’s kind of the enduring message — that music can, and should, make you feel good. But don’t dismiss the B-52s as a just a “tacky little dance band from Athens, Georgia.” There’s a reason they’re icons. As with those “Rock Lobster” riffs, their music gets right to the point and hits right in that animal part of your brain. As for their trademark vocal interplay between Wilson, Kate Pierson and Fred Schneider, there’s a reason you don’t hear other bands doing it: It’s really hard!

“There’s a lot of soul in our music,” says Wilson with her soft Southern twang. “We’ve always sat together and built the music. It’s always a collaboration. Fred is such a poet, and Keith [Strickland] is the music. Kate and I put in lyrics, too. [Our vocal style], it’s a very hard thing to do.”

The missing piece has been Ricky Wilson, Cindy’s older brother and one of the founders of the band; he passed away in 1985. The band almost didn’t recover.

“We were in a major depression,” Wilson says, “like, hit on the head. But we got back together, and it was a healing thing. Ricky is definitely still the spirit — the very fabric of the B-52s. He’s living and breathing through us.”

Their first “comeback” album came after that experience. Cosmic Thing produced one of the great dance hall hits of all time: “Love Shack.”

“To watch that become such a historic song,” she says, “it’s amazing.”

In February, the band filmed a show back where it all started in Athens. It was almost exactly 34 years after, on a bit of a whim, they played a friend’s Valentine’s Day party. Within a couple years of that epic house party, they were playing CBGB’s in New York City and landing on the Saturday Night Live stage. The DVD, which will also feature interviews with the band, hits stores sometime next year; the CD of the live show drops next month.

Another big thing right now are Wilson’s kids — yep, they started a band. After growing up on a steady diet of music lessons, her ’tween kids India, 14, and Nolan, 11, are in Already Taken (as in, “all the good band names are already taken.”) They’re getting gigs all over Atlanta.

“They’re having fun at it — man, that’s great,” says Wilson. “Learning how to be in a group and be creative together.”

As for offering any advice, well… “I’m Mamma, and in rock ’n’ roll Mamma can’t say a word,” Wilson laughs. “It’s their thing — they’ve got to rebel and express themselves.”

You know, it’s that age-old rock ’n’ roll rule — young musicians need to learn for themselves how to put smiles on all those faces and a shimmy in all those hips. Beehive hairdos can help, of course, but really it’s about the music.