After fighting his way back to the court, Przemek Karnowski is ready to wrap up a historic Gonzaga career 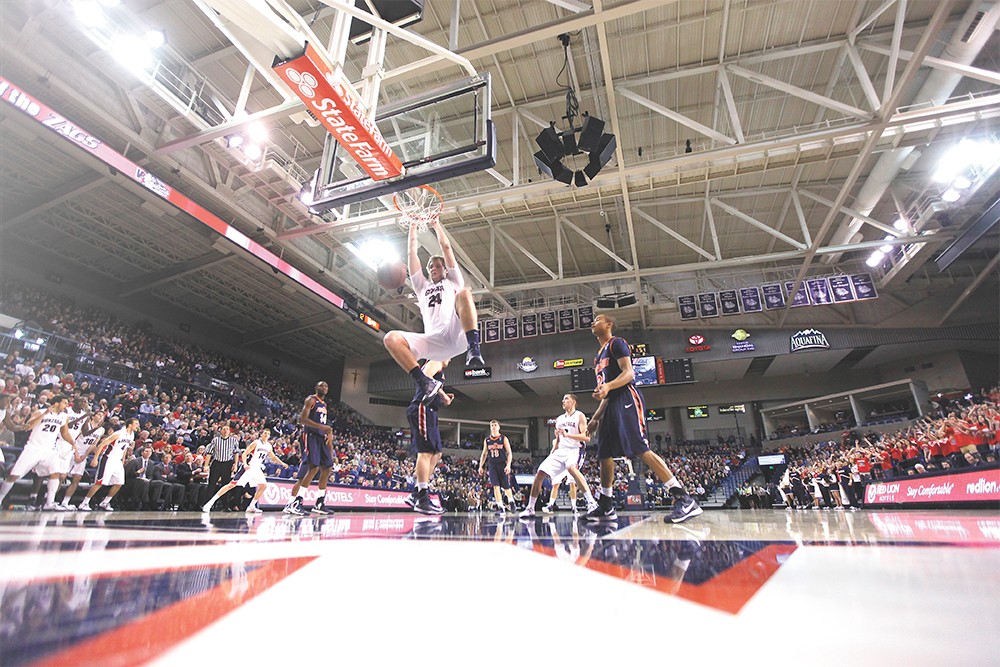 Young Kwak
A back injury kept Przemek Karnowski out most of last season, but he's back and hoping to make an impact on a new-look Gonzaga squad.

When Przemek Karnowski came to Gonzaga

in the fall of 2012, no one expected he'd still be here more than four years later. Yet here we are, in November 2016, and the Torun, Poland, native is preparing for one final season in Spokane.

Most Gonzaga fans were still eating their Thanksgiving leftovers the last time Karnowski set foot on a basketball court for a meaningful, competitive game. It was Nov. 27, 2015, and the Zags defeated Connecticut 73-70 at a tournament in the Bahamas. What had begun as a successful senior season for the 7-foot-1 center was then derailed by a back injury. Though it brought an early end to his year, it signaled the beginning of a tidal wave of support from Zag Nation.

"I got probably 200 to 300 letters every day," Karnowski says. "I never really get the opportunity to say this to people, except when I meet them face to face: I just want to thank everyone for the support I got before and after the surgery, and while I was rehabbing."

Since his injury occurred just five games into the season, Karnowski was granted an extra year of eligibility by the NCAA. Now, while grateful for the support he received last season, he's focused on this one.

His eagerness to return to the court doesn't seem to simply be a product of spending time away from the game, however. Statistically speaking, Karnowski is already a legend at Gonzaga. With more than 1,000 points scored and nearly 600 rebounds, he's set to become just the ninth player in program history to reach both of those benchmarks.

This season, he will look to become a leader as well.

"I think Coach [Mark] Few and the staff have been preparing me for that role for a while now," Karnowski says. "It also came kind of naturally, just being a fifth-year senior. I know how things go here, I know people around here, I know how practices go here. It should help out those younger guys."

Nine players on Gonzaga's roster enter this season having yet to play a single minute under Few. That alone makes having a senior leader like Karnowski an invaluable asset. But what's more, Karnowski is acutely aware of the struggle that many of these newcomers will face.

"We have lots of international guys coming in, from France, Japan, Denmark," Karnowski says. "As an international player, I've been here for so long that I try to help them out even with simple life things, like showing them where the store is."

Though his career has exceeded the average length of a typical college athlete's, and he now must work to help integrate plenty of new faces, there remains one Zag who has been with Karnowski from day one: senior guard Rem Bakamus.

"We're great, we're best friends," Karnowski said of the 6-foot-tall walk-on. "We understand each other on and off the court. Between us, it's awesome. It's been awesome since the first day."

Between balancing basketball and graduate school, Karnowski and Bakamus found time to attend a Macklemore and Ryan Lewis concert in Spokane together this offseason, where the 7-footer spent plenty of time posing for selfies with fans waiting in line to get into the show. When asked which of the two he preferred, Karnowski didn't pick Lewis, a Spokane native.

That's a fair answer. Because just as Macklemore is the main guy onstage at his concerts, Karnowski is going to be the main guy on the court for the Zags this season. ♦

Local veterinary clinics are busier than ever amid the pandemic, while other pet care services struggle to catch up
Top Stories

Is This the Year?