The demonstration in downtown continues. Plus, the police ombudsman gets weaker.

By Chris Stein and Daniel Walters 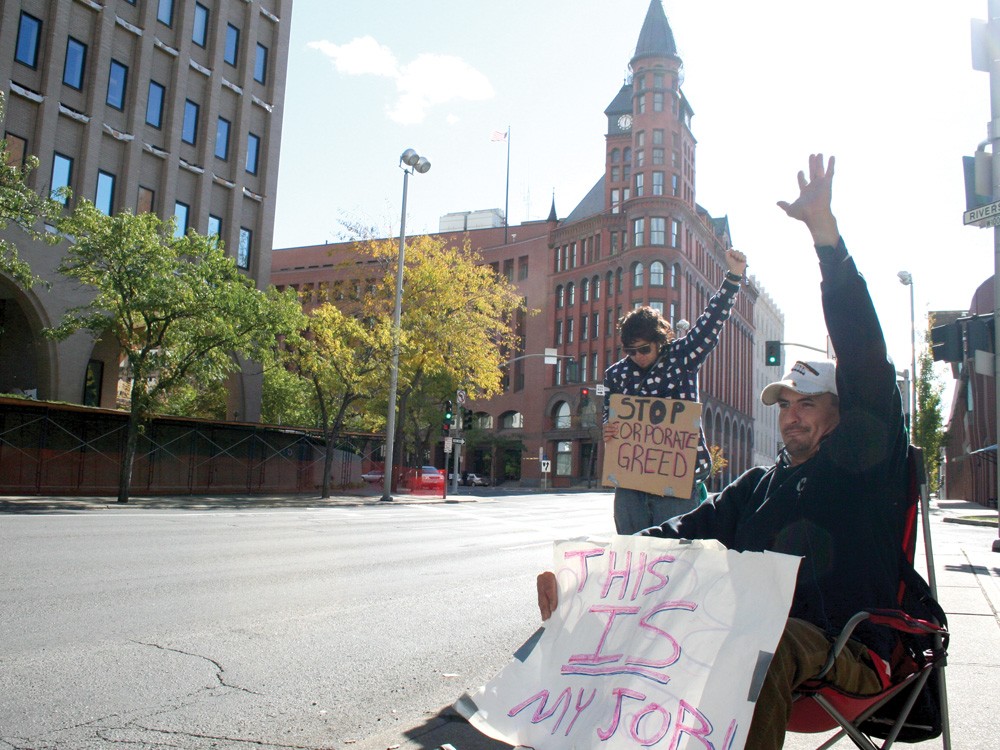 The homegrown anti-corporate movement that began in New York City and has spread nationwide has entered its third week.

Here in Spokane, supporters of Occupy Spokane continue to wave signs decrying corporate profits, income inequality and greed beneath the Monaghan statue at the intersection of Monroe and Riverside.

The protesters, who have kept a steady vigil since starting their occupation at the end of September, now have access to a kitchen run by Hippy Family Ministries. The kitchen is staffed by volunteers and serves protesters snacks and hot meals.

“This is just like one piece of the revolution,” says Ira Conger, a volunteer at the kitchen. “I’ve been here for nine days now. I’ve only left for 11 hours.”

The occupy movement started with Occupy Wall Street, a protest in New York City’s financial district that continues to this day. Similar movements have spread to San Francisco, Boston, Seattle, Portland and a host of other cities both in the U.S. and abroad.

Lawmakers have alternately praised and pilloried the movement. Civil rights icon and U.S. Rep John Lewis, D-Georgia, issued a statement saying protesters “are standing up for all of us who want more justice in our land.”

U.S. Rep. Peter King, R-N.Y., meanwhile, says the protesters are a manifestation of the left-wing that should not be allowed to affect policy.

Conger says the protesters plan to occupy the median indefinitely, and will hold marches on Friday and Saturday. (Chris Stein)

The office of the Spokane Police Ombudsman lost its stronger, independent investigative power after a Monday night vote by the City Council.

The 5-2 vote brings the city into compliance with a July ruling from a state arbitrator, which ruled that a June 2010 expansion of the ombudsman’s powers — by the same City Council — was done without proper bargaining with the police guild.

Two options stood before the city: appeal the arbitrator’s decision through the courts, or repeal the ordinance and head back to the bargaining table with the police guild.

Councilwoman Nancy McLaughlin — who along with Councilman Richard Rush voted against the repeal — says she believes the expanded powers had a slim chance of being upheld by the courts. But it would have helped the city’s case before the Legislature, if the city ever wanted to propose changing state law to allow the ombudsman’s greater powers.

“I think it would have allowed us to exhaust this opportunity so that when we went to the state, they wouldn’t have gone back and said we have to assess your opportunities,” McLaughlin says. “This was the byproduct of hopefully being able to get beyond any possible excuses from state Legislature” not to change state law.

Council President Joe Shogan, who authored the ordinance repealing the ombudsman’s powers, says appealing through the courts would have been an expensive process that the city was wise to avoid.

“It’s most productive to go through negotiations, because right now it did not look like the court system was the best way to go,” Shogan says, adding that negotiations with the police guild are underway. He hopes the guild will accept a contract that contains the ombudsman’s expanded powers. “It’s very clear that this is something that people want.” (Chris Stein)

Substantially, there’s not a whole lot different about this year’s iteration of Envision Spokane’s Community Bill of Rights than the version they put out in 2009. It’s quite a bit shorter, but it still features controversial ideas like letting anyone in the community sue to protect the rights of the river, letting neighborhoods have an impact on most kinds of developments, guaranteeing all unionized workers collective bargaining rights* and locally disputing the Supreme Court’s concept of “corporate personhood.” Like last year, the proposition has failed to garner any support from officials running for public office.

But so far, the volume of the debate still hasn’t been anything like the levels it reached in 2009, when nearly 80 percent of voters rejected the proposition. No “Save Our Spokane” committee, for starters.

One reason: Both campaigns have less money. Groups opposing the proposition last time raised over $250,000. So far this year, they’ve raised less than $65,000. Similarly, Envision Spokane has raised a little more than $11,000 so far — a fraction of last year’s take.

“There’s just less money out there,” Huschke says. “There’s less money to give.”

By this time in 2009, Center for Justice founder Jim Sheehan had already donated $55,000. Huschke says Sheehan will likely contribute this year — but the amount will “definitely be less.”

“Across the board, it’s the same story. People are preoccupied with other things,” says Kate McCaslin of the JOBS Coalition, the group opposing the proposition. “People are just running their businesses. They’re trying to stay afloat.”

As Election Day approaches, however, expect the debate to get at least a little louder. At the end of September, the JOBS coalition received a $40,000 donation from the National Association of Realtors — 16 times the amount of any other donation in the campaign so far. (Daniel Walters)

* A previous version of this story mischaracterized how the Bill of Rights would empower neighborhoods and workers.