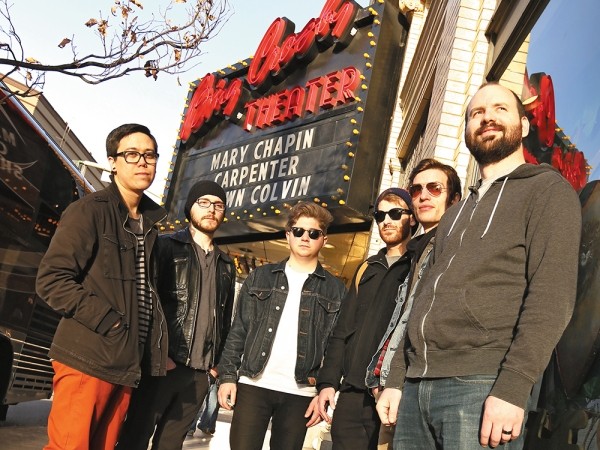 It’s no news that Spokane’s local music scene is in transition. Venues are at a standstill. Audiences shrink as money gets tighter. Lineups change, bands fade away.

But one thing’s for certain: the Spokane music scene is not without direction. Among all of the change, uncertainty and silence is a palpable feeling that Spokane is on the verge of ignition. We’ve got the spark, and the air smells of fuel coming this way.

Perhaps no two local acts are better examples of the remarkable staying power that a band needs in order to navigate the never-ending changes in the Spokane scene than Belt of Vapor and Dead Serious Lovers. Both bands will unleash new material at the Bing Crosby Theater this week, and with the new records comes significant changes for each.

“We feel like we’re just getting started,” says Aaron Powell, singer and multi-instrumentalist in Belt of Vapor. It’s not a sentiment you’d expect to hear, given that the band has played together for more than 10 years.

But it’s clear what he means. Belt of Vapor’s new album, The Recluse, is undeniably their most consistent and focused recording. It teems with believable, terrifying aggression and rabid howls, but is orchestrated in a manner more calculated than ever. It has its fair share of surface grime, but more professional recording allows The Recluse to really ruin your day.

In Belt of Vapor’s case, cleaner is meaner.

“When you record yourself, you tend to edit yourself less,” drummer Justin Walter says. “So after recording in a studio, this album’s a lot more simplified. We kind of thought things out more.” The conservative approach works.

Powell says this streamlined, more mature process was the result of a long period of relative dissatisfaction. “We really felt like we were beating a dead horse,” he admits, “playing so many shows with the same songs. The writing element was kind of on the back burner.”

Whatever they’re doing, it’s working: Powell and Walter say that they, along with bandmate Bob Homburg, have enough material to record another full-length, with an EP planned soon after. It seems backward, but Belt of Vapor are now spitting and seething more furiously than ever — all they had to do was straighten their ties a bit.

If Belt of Vapor have straightened their ties, local experimental rockers Dead Serious Lovers have taken theirs off completely.

“I’ve been guilty in the past,” says Henry Nordstrom, the Lovers’ leading man, “of taking myself and my music too seriously.”

Les, their new record, certainly shows Nordstrom and company’s commitment to making an emotionally leaner, more easily digested record. “We didn’t set limits on how to record the album,” he recalls, “we just tried to have some fun with it.”

But Les is by no means a comedy record. Its jaded, lackadaisical tone gives it an atmosphere that feels like a drunken, disappointed stumble alone back to your empty apartment, where week-old Chinese takeout and Law & Order reruns await you. It earnestly captures a queasy self-loathing that is all too easy to relate to.

“We recorded the last album as a two-piece,” Nordstrom says, referring to guitarist Vaughn Wood, “but since then we’ve gotten a drummer, so we wanted to record and see what we could do in the studio.”

The addition of drummer Brandon Vasquez is no small improvement — he shines in the new material. Les is adventurous and curious, and stunningly self-assured. At no point does the album feel like it was recorded in several living rooms — which it was.

One of the most exciting things about Thursday’s record release show has to do with the concert venue itself. The Bing Crosby Theater has never been fully utilized as a space for local musicians to play (at least not since when it was The Met), making the two-band lineup something of a rarity for the concert hall.

The event will be an all-ages show, something uncommon for both Belt of Vapor and Dead Serious Lovers. It’s no secret that the shortage in quality all-ages venues is seriously holding back local music, and Belt of Vapor say that making the show all-ages will be a key to its success.

“Even though we feel old, our music appeals to the youth,” Walter says.

Powell agrees. “We wanted to be able to play to a younger audience. And people aren’t only supporting us, they’re supporting a great potential all-ages venue for local artists.”

If all goes according to plan, Belt of Vapor and Dead Serious Lovers might not be simply playing a great rock show, but making a case for a whole new avenue in Spokane’s local music scene.