Cathy McMorris Rodgers has a healthy advantage in fundraising, name recognition and … well, see for yourself. 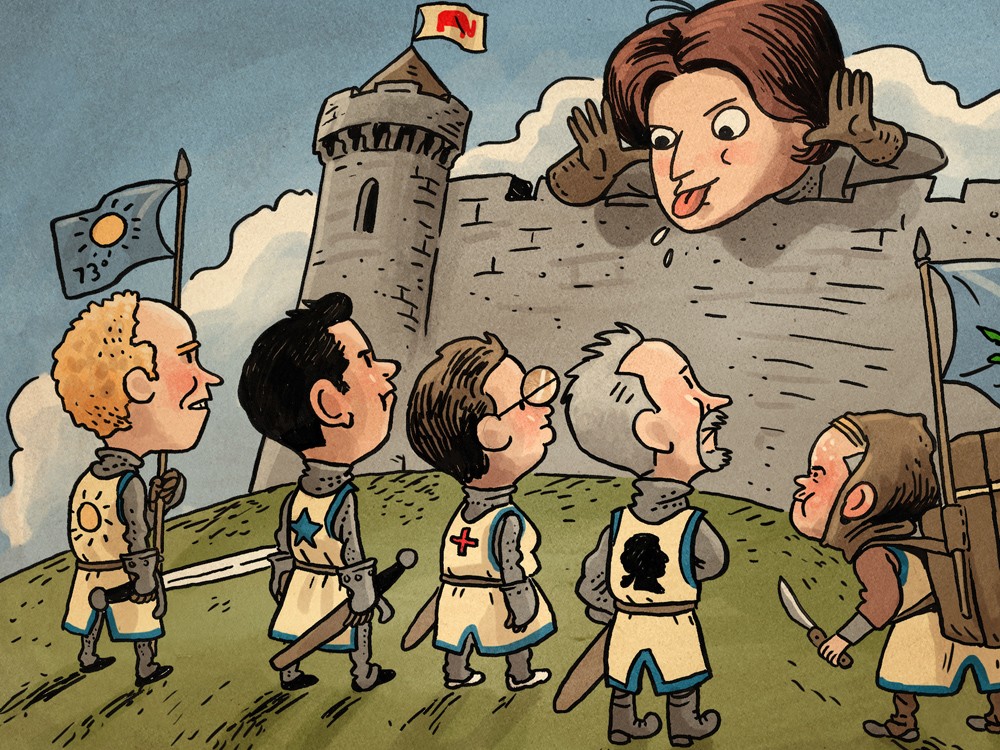 Cathy McMorris Rodgers has raised a bit more than $1 million this election cycle, and she still has $620,000 in the bank. That, without a doubt, is a war chest.

According to federal elections records, her five opponents — four Democrats and a member of the right-wing Constitution Party — have raised nothing. Total.

In the last three elections, she sailed to victory despite some well-spoken and well-heeled opponents. And, if you listen to the pundits, 2010 will be a very good year for Republican congressional candidates.

But not everybody thinks things are looking good for McMorris Rodgers. These people are, by and large, her opponents.

The reason why Fox made Seattle news speaks directly to why no one here really knows who he is.

As a Port Angeles attorney, Fox said he was going to run for prosecutor in Clallam County. Days before that race’s filing dead line, he was arrested at the Seattle-Tacoma International Airport after allegedly pulling a knife on a ticket agent. He was charged with possessing a lot of stuff (drug paraphernalia, marijuana, a restricted drug without a prescription) and driving while intoxicated, according to press reports.

“That was much ado about nothing. Yes, I did show them a knife. But I wasn’t flashing it. … I wasn’t trying to scare anybody,” Fox says. As for the alleged drug possession, Fox says, “Who cares about marijuana? It wasn’t a big deal. I’m not admitting to anything. It was an illegal search of the car.”

At the last minute, he filed to run for Eastern Washington’s congressional seat. Candidates do not have to reside in the districts they’re running to represent. Fox says his residency is unimportant, mainly because he was born and reared in Othello, where he still has a stake in his family’s farm.

“My heart and soul has always been in the 5th District because I make a lot of farm decisions,” he says, noting that he chips in when his brothers are deciding when to purchase the “circle sprinkler things” for the farm.

“It’s my raison d’étre,” he says about agriculture. “That’s French for ‘reason for living.’”

Still, he expects voters to reject McMorris Rodgers because she’s a “professional politician” who has no qualifications to be a member of Congress. For the record, Fox couldn’t name Spokane’s mayor, its state senators or any county commissioners.

These are many of the positions that Barbara Lampert, another candidate in the 5th, has wanted to fill.

Nonetheless, Lampert thinks she has a chance against McMorris Rodgers, who she lost to two years ago by finishing third in the primary with 11 percent of the vote. (About 20,000 people voted for her, compared to the 97,000 that voted for McMorris Rodgers.)

Her two main issues are the economy and securing our northern border. “Border security is a problem because four of our counties have an international border,” she says. “Just as many drugs and people are going over that border as they are the other one.”

But how does she expect to overcome the incumbent’s experience and pile of cash?

“I think she’s been in office for several terms … and it’s good to have somebody living in the district recently and not out gallivanting around,” she says. “I think I have sensible ideas and I’m able and willing to represent the people. That is more important than millions.”

Randall Yearout, the lone candidate from the Constitution Party, agrees.

“I think that money isn’t necessarily everything anymore,” Yearout says. “Abandoning principle is what got us where we are.”

As the most conservative candidate running against a very conservative candidate, Yearout made it clear he was not just running against McMorris Rodgers, but against the “Democrat-Republican Party,” which he called “the only game in town.” Yearout has been endorsed by the Campaign for Liberty, and says of the local tea party, “I know they like me.”

As congressman, he says he’ll restore Congress’ impeachment power, state sovereignty and just about anything else he gets from interpreting the “original” meaning of the Constitution.

God notwithstanding, he did take aim at the incumbent. “She was trained as a politician, and by God that’s what she’s done.”

“She has name recognition —$600,000 would do me a lot of good because I have no name recognition,” Cordero says. (Daryl Romeyn, a former weathercaster for KXLY and KREM-2, also has plenty of name recognition. He could not be reached for comment.) Despite Cordero’s paucity of cash — he says he has $8,000 in the bank — he’s undaunted.

“People are looking for alternatives right now, instead of traditional politicians,” he says. As for getting people to pay attention, he says there are “guerilla tactics” to employ.

“Look at this guy in South Carolina. With no money, he can get press coverage just because people are curious about him,” he says, pointing to a very unlikely source of inspiration in Alvin Greene, who overwhelmingly won the Democratic Party’s primary last month in that state’s U.S. Senate race with no campaign apparatus at all.

Still, Cordero says he understands he has a long way to go. “In some ways it takes the pressure off. In that sense, it’s not like we have anything to lose,” he says. “It’s not going to be a slam dunk. I’m not going to say I can’t win, because I think I can win.”

And he’s ready to take McMorris on.

“I just wanted somebody in the race that was willing to hold her accountable,” he says. “I may not be bound to win, but I am bound to be true.”