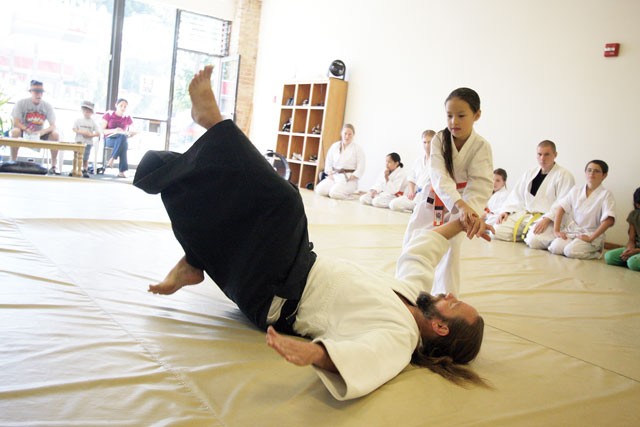 Young Kwak
Marion Sconawah, 7, does a throw on James Landry at the Aiki Institute of Spokane. "Amazing stuff happens on the mat," says Landry.

Bobby definitely knows more than I do. In a Thursday afternoon class at the Aiki Institute of Spokane, the 10-year-old boy wears his experience — an orange belt — around his waist.

Bobby is patient and serious as I nervously laugh: I’m supposed to push him down. He wants me to. And James Landry, the sensei and chief instructor of the Institute’s Roshinkan Aikido dojo, is saying to do it, too. Grab his elbow. Take a step. Push Bobby on the mat.

It’s not violent by any means. In fact, that’s what Landry, a 20-year practitioner of the discipline (he’s careful to say that aikido, to him, isn’t a sport), likes most about aikido. It’s not competitive. Or violent.

“Two things that really came out to me in my first encounter with aikido was how graceful and beautiful it is,” he says. “It matched my own personal philosophy of not harming other people.”

Essentially, if Bobby wanted to hurt me, he wouldn’t be here today. Landry makes sure all of his students — some as young as Bobby here (and in the youth classes, even younger), and others in their 60s and 70s — know that this is not about fighting or violence. It’s about philosophy, community and relationships.

“You have feedback, you have to deal with relationships,” he says. “In a conflict you’re not by yourself. You have to learn to work like that.”

Indeed, while aikido involves working with a partner, it is not about attacking, but more about dealing with what the world throws at you.

“For me, it’s a philosophy of how to live life. I’m not ever competing with anybody. I don’t have to win,” Landry says. “My focus is to create a better space for us both to be in.”

He laughs as he recalls a sweatshirt that some of the participants here wear to show aikido’s acceptance of the uke (opponent).

“It says, ‘Have you hugged your uke today?’”

Landry says you’ll feel uncoordinated for the first few classes. He’s not kidding. During the initial stretches, I’m feeling like a pro. But by the first partner exercise, that feeling is gone. I’m confused, but no one’s making me feel stupid about it.

“Everyone who gets on the mat,” Landry says before class, “I have a lot of respect for them. Amazing stuff happens on the mat.”

According to the Aikido Association of America, Aikido promotes improved general conditioning in a unique way. By learning to relax — often a challenge in its own right —and then to move from the center of the body, balance is improved, and core muscles of the back and abdomen get a good workout. Training emphasizes the use of the whole body, similar to dance or gymnastics, rather than focusing on separate muscle groups. But it would be a mistake to separate the physical from the psychological effects. Adherents say the physical relaxation essential to the movements enhances mental relaxation. And by learning to face conflict head-on at the dojo, practitioners can then deal more constructively with challenges in every day life.

Josh Smith, who started practicing aikido a few years ago, laughs that his wife tells him when he needs to work out.

“She has told me, ‘You’re not training enough. You need to go back to the dojo,’” he says. He notes it helps him “have the flexibility to deal with surprises or chaos and not let that disturb what’s going on. You can take that change and accept it and redirect it into something that’s positive.”

Mary Tracey has been training with Landry for more than four years, and says that since she started aikido, she’s lost almost 20 pounds.

“I’m not ripped by any sense of the imagination, but that’s certainly weight I’ve kept off,” she says.

“I like for things to be black and white, and I think in aikido nothing is really black and white,” Tracey reflects. “It makes me more comfortable with change and chaos. It makes me a little more rooted in being myself. It helps me to maintain my own personal values in tough situations.”