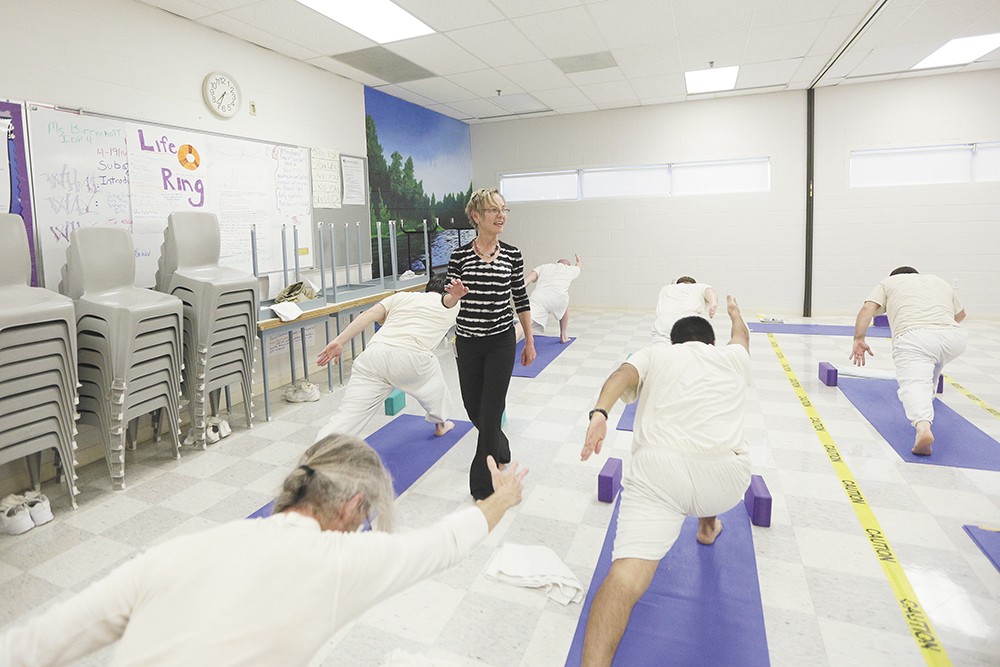 on their blue mats, eyes closed, inhaling and exhaling through their noses.

"How do you feel?" asks yoga instructor Diane Sherman, walking among them. "What's your mood as you start your practice today?"

This particular Tuesday is the start of a new six-week advanced yoga session, held weekly in a Recreation Building classroom deep in the bowels of the Airway Heights Corrections Center — a place that looks more like an extra-orderly community college campus, albeit one with checkpoints and closed-in barbed-wire fences, than a medium- and low-security prison that houses about 1,500 offenders.

Tonight, in a whitewashed room used for AA meetings and GED prep classes, tatted-up inmates ages 20 to 60 are asked to focus on themselves for the next two hours.

These men have been convicted of offenses ranging from drug dealing to murder. But here in standard-issue white T-shirts and gray sweats, they grimace and sop up their sweaty brows with towels and point and flex their toes — like anyone else in a yoga class in the outside world.

Corrections officers are not in the room, but rather down the hall. Sherman, and the three other volunteer yoga instructors who teach here, do this alone.

"What was that? That was cheating," says Sherman to an inmate she sees trying to take the easy way out of a pose.

Sherman, tiny and calm, has a reputation here for being the toughest teacher.

just before class, Jason (last name withheld, in accordance with the prison's policy) successfully bends forward and touches his toes.

"I've never been able to do that before," says the 35-year-old, with a shaved head. He's practiced yoga here for three years and says he started for the health benefits.

"I've now added yoga to my fitness routine, but it's become more about the mindfulness than anything else," Jason says.

A bearded inmate named Michael agrees, but adds that reaching into the deeper mental side of yoga is far more challenging than the physical aspect. Michael, 41, started yoga while at the Washington State Penitentiary in Walla Walla, watching P90X videos that included the discipline.

"You think you're doing it right, and then Diane quickly told me my technique was all wrong," says Michael, who's now practiced yoga for six years.

When other inmates make fun of yoga, these guys don't let it bother them.

"Our class is at 16 guys right now, and by the end we fully expect about half to drop out," Michael says of this six-week session. "It happens every time."

They say that Sherman's class is the most challenging, that she has them hold poses until they think they can't anymore. They've all had to pass beginner yoga first to be in her class.

"The best part is the end, when she has us in corpse pose (lying down on the mat with eyes closed)," Jason admits.

"When I'm doing this, I hate it," Michael says. "But when I leave here, I feel so much better."

Tonight is the first time back to class in six weeks. Sherman has recently returned from India, and although the inmates say they do yoga on their own, they're excited to return to the flow.

if she's scared. But Diane Sherman isn't — not anymore.

Her first class, six years ago, was held in the gym (just down the hall from today's classroom), with 12 offenders in attendance. She wanted to serve this population, but that didn't come without a heightened sense of awareness.

After moving from the Bay Area to Spokane six years ago, the certified yoga instructor and artist landed a position with Harmony Yoga, where she still teaches. When she heard that AHCC wanted to start a yoga program, she jumped at the chance.

"I was interested in the idea of what freedom exactly is," she says. "There's something about prison, they've taken a wrong turn in their lives to be here. I'm not here to help them, per se, instead it's to teach them about a path that's a different way." 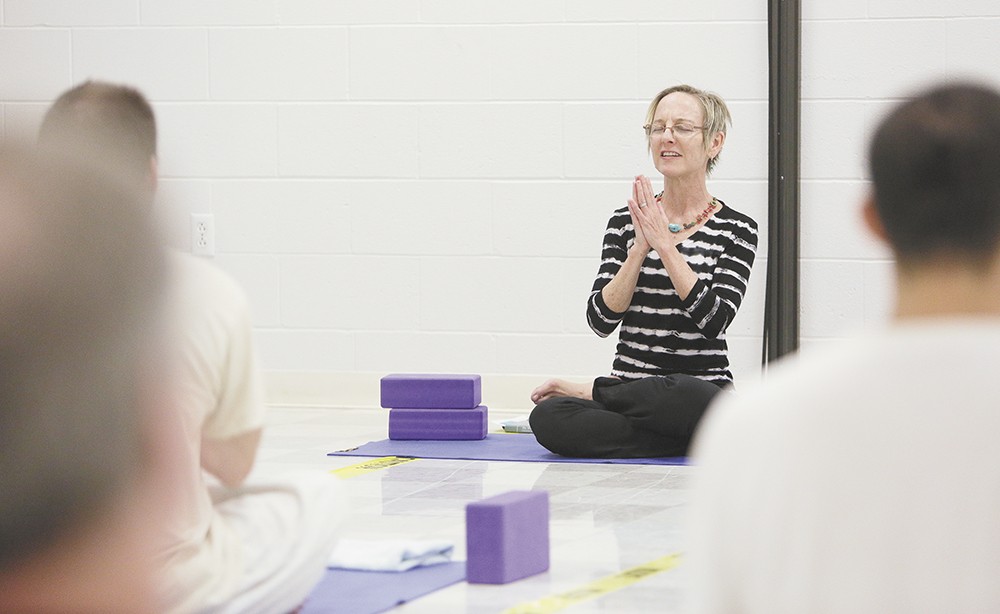 For two years, Sherman was the only instructor.

"The guys liked it, but they got a lot of crap for taking yoga, which often has a sissy reputation," she says. "But I told them, 'You are the warriors. You know this is hard, and still you come and do this.'"

She says the inmates have always been respectful, that they like her class and they wouldn't want to ruin that. She dresses more modestly here and she's not allowed to touch the men, instead showing a pose in the correct way next to someone, or explaining with terms.

At one point there were six instructors, before a couple of them had to move. Now, two inmates are being trained as part of the statewide nonprofit program Yoga Behind Bars, and will soon be able to lead classes at times when volunteers can't make it, like on evenings or weekends.

Ann Wise, Community Partnership Program Coordinator for the facility, says this is a wonderful step for the program. It's not easy to be a volunteer here. There's an annual background check and multiple screenings. Still, Wise says she has about 200 people volunteering for a wide variety of programs.

For Sherman, all of this is worth it. After the trip to India, she feels energized and healthy. She says this class is her favorite.

"For two hours they get to relax," she says. "There's a lovely opening into humanity when we practice together."

Today, already 15 minutes into the class, heat and sweat rise to the inmates' faces. Sherman brings them into mountain pose — standing at the top of the mat, arms at your side. It's a time to breathe and prepare mentally before the next round of challenging poses.

"Just you standing, being. That's all you need," Sherman says.

And they all inhale, reach for the sky and begin again. ♦