How puppetry is helping a woman reconnect with her roots in Valleyford. 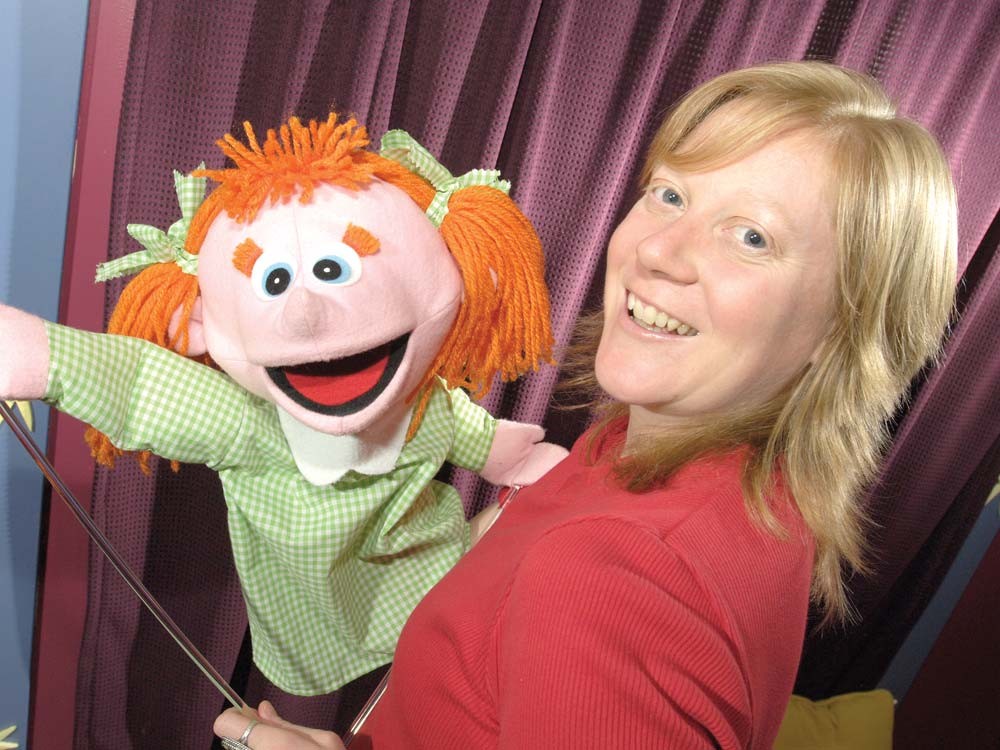 Steve Hambuchen
Penny Walter, with Robin: “This is going to sound hokey, but the puppets just come through me.”

There's a manic chicken running across the stage, and she sounds like Mrs. Doubtfire. A hand puppet with bulging eyes and a loud, silly cackle, she is called Little Red Hen, and today she and her barnyard friends are planting a seed of wheat to make bread.

“I want to see you shake your tail feather,” she sings to an audience at the Moran Vista retirement home, as she struts and shakes like a young Tina Turner. Behind the makeshift stage, Penny Walter, a small woman in red pigtails, manipulates Little Red Hen, extending both arms, bouncing back and forth behind a black and gold curtain that looks like a starry night sky. The stage’s PVC-pipe scaffolding wiggles and shimmies.

The audience is enthralled. About 50 elderly people sit in olive wing-back chairs beneath the vaulted ceilings of one of the home’s meeting rooms. Wearing pastel cardigans, they sit with crossed ankles, clutching little bits of handkerchief and tissue.

But one woman, who was given a prime spot in the front row with the walkers and wheelchairs, can’t sit still. Five times during the puppet show, she gets up, looking a little confused, and walks to the gallery of attendants who watch from the back row. Each time they politely guide her back to her seat, encouraging her to watch the performance.

She’s just looking for her daughter.

She works mostly with hand-and-rod puppets, like the Muppets.

But this winter, Walter left her career in Portland to move back to Valleyford, in the hills south of Spokane Valley, to be near her mother. Her father died recently, and her mother suffers from Alzheimer’s.

“It’s funny, ’cause I’m living back in the house I grew up in and my parents just kept my room as a shrine or something,” she says. “They must have intuitively knew. I have Muppet posters all over the room and all the different puppets I played with as a kid. I think it was just my destiny to come full circle.”

But Walter’s destiny is bittersweet. Her parents never saw her perform a live puppet show.

“It’s always been a big deal,” she says. “I told them they should come to Portland and watch me perform but I didn’t realize that Mom was getting worse and Dad was taking care of her. Each year she was slipping more away.”

Now Walter is trying to make her way in Spokane. She writes her own scripts and songs despite no formal training, and she owns more than 500 puppets. The profession called to her while she was earning her master’s degree in early elementary education. “I was teaching in a kindergarten classroom when I started to incorporate puppets,” she says. “It was like, ‘Wow, these puppets are magic.’ When I said, ‘OK, it’s time to clean up,’ none of the children would respond.

“But when I pulled out a puppet called Sir Mortimer Ham, the kids were practically falling over themselves to help.”

The possibilities were endless. Nutty the Squirrel needed help counting his nuts. A little girl named Robin helped teach the kids to read by traveling the city and writing them postcards.

“I really fell in love with it,” she says. “But after a couple of years I found that the puppets were teaching all day long. I decided that if I was encouraging children to use their natural gifts and follow their hearts and dreams, it was time for me to follow mine.”

Walter had always dreamed of becoming a puppeteer.

She had performed her very first puppet shows at age 3, on a homemade stage in her parents’ antique shop. In Portland, she became a fixture in the puppetry scene, performing at libraries, schools and museums.

“This is going to sound hokey, but the puppets just come through me,” she says. “I don’t always know what they’re going to say and I’ve been working with them for so long that they have these personalities. If something were to happen to one of them, heaven forbid, I would be broken-hearted. It would be like losing part of my family.”

After 30 minutes of singing and barnyard dancing, Little Red Hen bids adieu to the crowd at Moran Vista, and Walter steps out from behind the stage, her cheeks flushed. The little old woman who had been wandering the room during the performance springs to her feet from the front row. There’s her daughter. It was as if she had appeared out of nowhere.

Walter extends her arm, and Little Red Hen gives the old woman a hug. With her other hand, Walter gently brushes her mother’s hair back behind her ear.

“Today was actually my mom’s first show, but because of the Alzheimer’s she didn’t understand that it was me back behind the stage, ” she says later, knowing that her mother will never truly see her perform. “This is a strange disease. But you just have to live in the moment.”