that must be clear before we start talking about Magic Mike XXL: The original 2012 Magic Mike was not about male strippers. Make no mistake: It contained male strippers. A whooooole lot of 'em, grinding and thrusting away in routines designed to send female audience members — within the movie itself, and in theater seats — into fits of shrieking glee.

But the movie was not fundamentally about male strippers, and that's why it worked as something besides beefcake eye-candy. Director Steven Soderbergh and screenwriter Reid Carolin used that milieu as the backdrop for a Great Recession-era tale of shadow economies, with people working their hardest and resorting to less-than-savory activities in an attempt to stay above water, let alone grab the American Dream. From the efforts of Mike Lane (Channing Tatum) to finance his custom-furniture business to under-the-table construction jobs and drug deals, Magic Mike was, at its core, about money — and not just the singles stuffed into the protagonists' G-strings.

Magic Mike XXL picks up three years later, and it's got entirely different things on its mind. More to the point, it really has nothing on its mind. Mike is still running his furniture business in Tampa, mourning the recent end of his relationship with Brooke, when he hears from his old stage buddies—Richie (Joe Manganiello), Tarzan (Kevin Nash), Ken (Matt Bomer) and Tito (Adam Rodriguez) — who are now facing a last hurrah after being ditched by Dallas and The Kid (Matthew McConaughey's and Alex Pettyfer's characters, not returning for this go-round). That last hurrah will be a trip to the annual stripper convention in Myrtle Beach, a trip on which Mike impulsively decides to come along.

What follows is mostly an episodic road trip, as the lads bounce up the coast: a beach part stopover, where Mike meets a flirty photographer (Amber Heard); an impromptu routine in a convenience store set to "I Want It That Way"; a visit with one of Mike's old associates, Rome (Jada Pinkett Smith), who's now running a lavish private male stripper club in Savannah. Director Gregory Jacobs — Soderbergh's longtime assistant director, taking over the main chair while Soderbergh still serves as cinematographer and editor — maintains the loosey-goosey performance energy of the original, with plenty of casually entertaining banter. And while McConaughey's oily Dallas is missed, Tatum carries XXL a long way purely on the strength of his charm and charisma... OK, and his ridiculous abs.

But what's missing is anything even remotely resembling a story, even the thin "mentor and protégé" narrative that supported Magic Mike. Carolin (also returning as writer) makes some token stabs in the same economic direction as the original, with members of Mike's crew variously mentioning their dreams of selling yogurt, becoming an artist, singing and acting, etc. Here, though, it all feels like background noise — something to talk about because they need to talk about something on that long trip up to Myrtle Beach. Even the subtext of "male entertainers" facing the downside of their career as they hit their late 30s is quickly discarded (though it inspires a great gag about a younger generation of dancers doing a Twilight-themed routine). It's a movie where stuff happens, on the way to the next scene where stuff happens, on the way to the final scenes where big stuff happens.

A lot of the stuff that happens involves hunky guys dancing provocatively with their shirts off, and let's be honest: There's an audience for that. Based on the advance screening I attended, that audience would be thrilled to be part of the audience up on that screen, making it rain dollar bills on those hunky, provocatively dancing guys. The accompanying choreography is bold and wild, shot in a way that dancing is rarely shot in movies anymore, so that you can actually appreciate that athleticism of the routines. But it's sad that there's such a gaping hole in the middle of the "let's put on a show" stuff. Even the final shots — seemingly meant to duplicate the lineup at the end of Ocean's Eleven — can't hide that this caper isn't an effervescent ride. It's just a movie about male strippers. ♦

Magic Mike XXL is not showing in any theaters in the area. 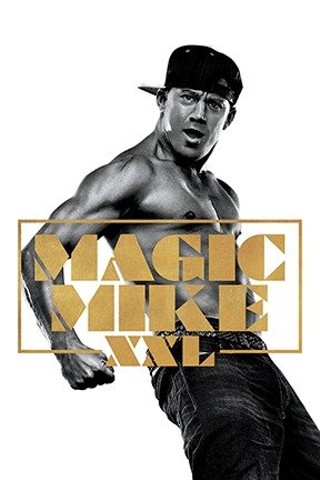