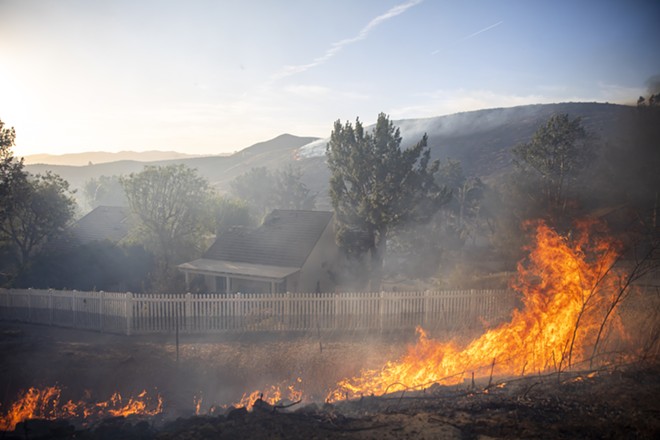 California was facing the worst kind of weather for wildfires on Wednesday — strong, gusty winds and very low humidity. Officials feared that the gusts could blow embers more than a mile away, complicating their efforts to contain new or existing fires.

In the southern part of the state, where gusts were expected to peak Wednesday morning, a new brush fire broke out in Ventura County, threatening the Ronald Reagan Presidential Library and Museum and forcing evacuations.

And in the Los Angeles area, a 745-acre blaze known as the Getty fire has prompted the evacuation of more than 7,000 homes. Firefighters made progress overnight on the fire, which was 27% contained Wednesday morning.

In Northern California, firefighters made inroads overnight in battling the Kincade fire, which has consumed much of the area around Santa Rosa over the past few days as it swelled to become the largest active wildfire in the state. The 76,000-acre fire is now 30% contained, up from 15% on Tuesday, and forecasters were cautiously optimistic that the winds in the area had died down and would not strengthen again for at least a few days.

Many houses tucked into the woods are still at risk, and saving those will be a priority over the next few days, officials said. Already, the fire has destroyed 206 structures, including 94 homes.

The blaze known as the Easy fire quickly grew to more than 400 acres and led local officials to order an evacuation for parts of Simi Valley and Moorpark, two cities in the southern part of the county. The evacuation area consists of ranches, farms and a golf course, and is not densely populated, said Eric Tennessen, chief of the Ventura County Sheriff’s Office.

Video from local news outlets showed smoke billowing from several distinct parts of the fire along hilltops as the sun rose, with the flames fanned by the wind. The fire approached the presidential library, which houses memorabilia including a former Air Force One plane inside, but was kept at bay by firefighters as of about 9 a.m.