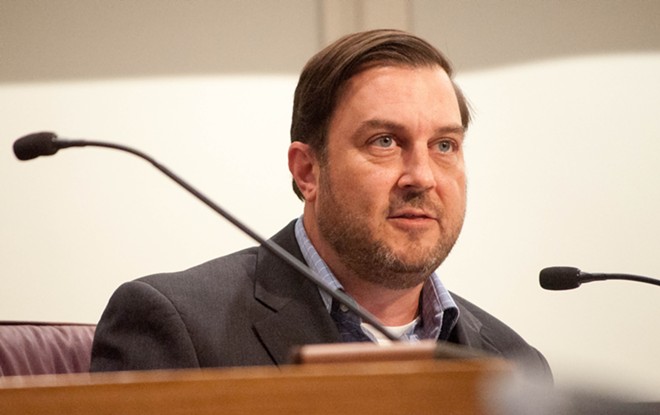 When Spokane City Council President Ben Stuckart talks about homelessness, he doesn't just talk about shelters. He talks about housing.

"Many of the families on our streets simply cannot find an affordable place to live in our community," Stuckart wrote in a post on his mayoral campaign site last year. "A shortage of affordable housing units that has left more than 800 of our citizens holding vouchers with nowhere to spend it."

The need for new housing has meant Stuckart often sings from the same songbook as the conservative Spokane Home Builders Association, championing policies that would strip away regulations. On his campaign site, Stuckart even proposes generally eliminating parking regulations for developments, making it easier for developers to build more housing in a smaller space.

"In my perfect world, we'd have no parking requirements," Stuckart says, while acknowledging that's not necessarily politically feasible.

On Monday evening, the City Council unanimously voted to award multifamily-housing developers extra "points" when they compete for the city's "projects of significance" funds.

When the city refinanced the River Park Square bonds two years ago, Stuckart explains, the city saved $2 million, and put that money into a pool that developers could use for public improvements, like landscaping or utility upgrades. When interested developers, like those rehabbing the Wonder Bread Building, The M and the Ridpath, applied to the city for some of those funds, the city graded each proposal on a 150-point scale.

But while the city was awarding developments extra points for, say, building manufacturing instead of retail, Stuckart says, "we noticed that there were no points given if there was housing."

Monday's vote changes that. And more possible changes are coming: The City Council is planning on increasing maximum heights and loosening parking restrictions in the denser "centers and corridors" of Spokane.

Stuckart says that, while the planning commission supports this proposal, it also wants to create medium-density "transition zones," avoiding the aesthetic whiplash that can come from a tall apartment complex being plopped down right next to single-family homes.