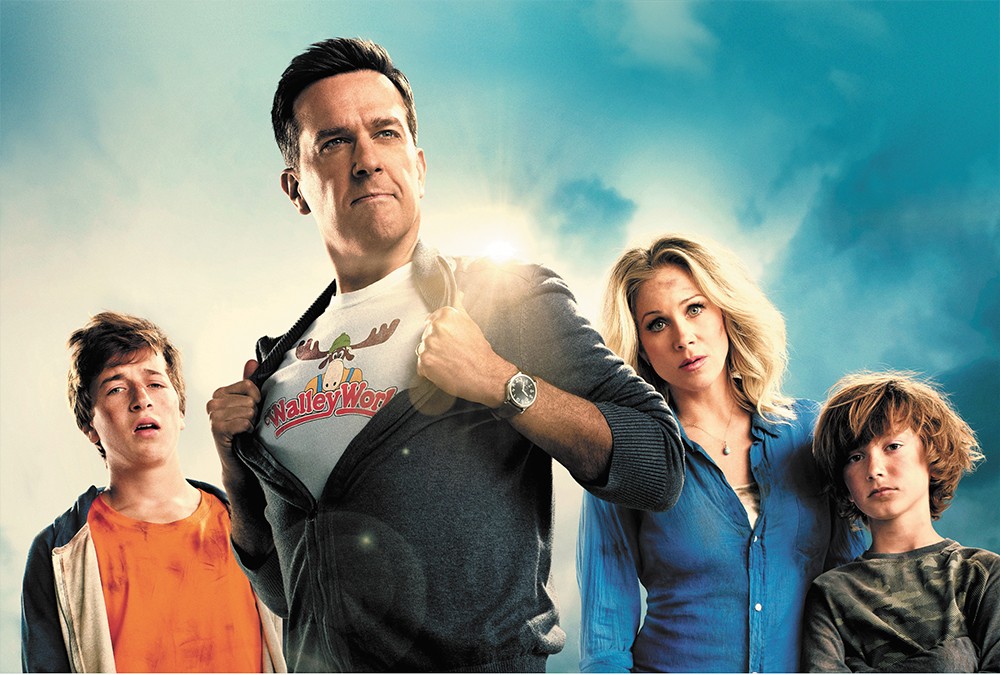 (Ed Helms) tries to fire up his family — wife Debbie (Christina Applegate) and sons James (Skyler Gisondo) and Kevin (Steele Stebbins) — about taking a car trip to the Walley World amusement park just like the one he took with his parents and sister 30 years earlier, James interjects, "I've never even heard of the original vacation." "Doesn't matter," Rusty responds. "The new vacation will stand on its own."

It's a solid gag in the age of the perpetual remake/reboot cycle, but writer/directors John Francis Daley and Jonathan M. Goldstein (screenwriters of Horrible Bosses) probably didn't take into account the age of the perpetual marketing cycle. Because anyone who has seen a Warner Bros. movie in the past two months has already heard that joke — and plenty of others in the Vacation trailer — over and over and over again.

The studio's attempt to flood the world with ads and trailers — including at promotional screenings attended by media — doesn't do any favors to a movie built around startled laughter inspired by its outrageous jokes. Is it fair to assess a movie relative to the way it's being sold? Probably not. But that doesn't help me laugh any more at the movie itself.

The premise, just as it was in the Chevy Chase original, allows for plenty of jokes built around the tension and claustrophobia of long family road trips. As the Griswolds head from Chicago to California in their rented Albanian car, Rusty and Debbie confront the possibility that their marriage is growing stale, and James deals with his unwelcome role as a victim of bullying from younger Kevin. And Vacation in general tries to do that thing so many 21st-century raunch-comedies do, where filmmakers try to balance the gross-outs with the idea that it's really all about people and their emotions and their sensitivities and whatnot.

It's not actually about any of that, which is just fine much of the time. The running bit involving the Griswolds' mutant car and its incomprehensible features — a GPS system that suddenly starts shouting in Korean; a rotating driver's seat — somehow keeps finding great material, and there's a terrific moment early on about a friend passive-aggressively complaining about Debbie not "liking" her Instagram pictures. In general, Vacation is at its best when it's simply surreal — like Rusty's frustrations trying to kick tumbleweeds — or making the most of the comic performances by Applegate and Chris Hemsworth (as Rusty's justifiably narcissistic brother-in-law) rather than going for the gross-out gag.

But go for those gags Vacation does, in ways that are sometimes predictable even beyond the bits that have been plastered all over the trailers. An extended sequence and multiple punch lines are built around Rusty's lack of familiarity with a certain terminology for a sexual practice, which might have been funny if anything else in the movie suggested that he was quite so naive; he was certainly acquainted with the concept of a "glory hole." And while Applegate is a performer game enough to wring the most out of a sequence involving repeated bouts of projectile vomiting, Vacation too often falls back on that notion that simply being naughty — "Can you believe how many time we let the younger boy drop f-bombs!" — is the same as being funny.

Still, it's hard not to wonder how much funnier Vacation might have seemed if Warner Bros. had been willing to allow just a little more discovery of its wildest high concepts. In yet another often-marketed scene, Vacation plays on a callback to a signature bit from the original movie, involving a sexy woman flirting with Rusty while they're both driving. It's a terrific concept for a visual joke, but a movie comedy's momentum is ruined when you're spending several minutes sitting through the setup for a joke whose payoff has been hammered into your retinas for weeks. In a way, I feel bad for Daley and Goldstein, who may fumble a few opportunities, but mostly collide with a marketing department whose job isn't to trust that the new Vacation will stand on its own. ♦

Vacation is not showing in any theaters in the area.