Success on the Slopes 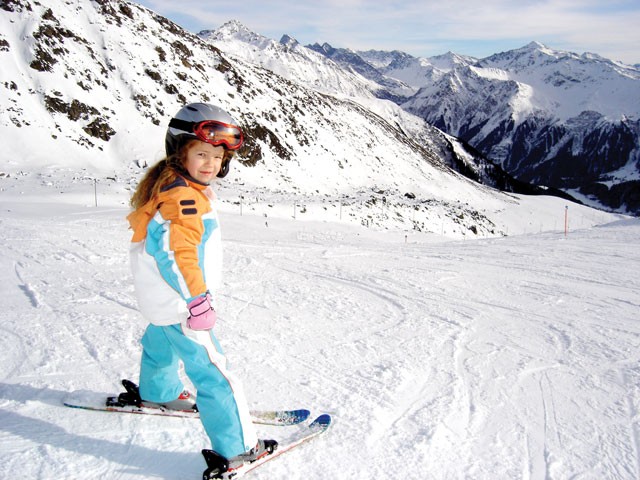 Kids love to ski, but they need to have a good first experience to get there.

Oversleeping. An unexpected blizzard. Icy roads. A missing glove. A broken binding. A lost ski-rack key. Any of these circumstances can derail an introduction to skiing.

Experts at area ski schools say a positive first experience is vital for young skiers, and parents need to plan ahead for the best chance at a successful start.

Preparation goes beyond packing lunches and two sets of cold weather gear. (Always pack the night before). Satisfy a child’s curiosity about skiing and your own peace of mind by making a practice run to the resort.

“Assess the places to park, find out where ski lessons take place and if the daycare and rentals are in the same building,” suggests Terry McLeod, snow sports school director for Schweitzer Mountain Resort.

“Kids are just stoked to be in the snow. They want to make snowballs and play in it. Let them walk in the skis,” says McLeod. “Get them used to sliding, and keep them on flat terrain.”

Parents can guide a child’s first experience with gear, but when it comes to teaching the mechanics of the sport, leave it to the professionals.

“It’s physically demanding to teach a child,” explains Mount Spokane Guest Services Coordinator Myris Sportsman. “I think parents find they don’t have the bending and lifting skills… they find it’s a lot harder to ski backwards if they don’t have twin-tip skis,” says Sportsman. She asserts that children are more likely to ask questions and allow for failure with an unrelated professional.

“Kids feel like they can go to an instructor and not have them get upset. They don’t want to disappoint mom or dad,” she says.

“We expect too much, emotionally and physically,” says McLeod. “If you’re teaching a child, you don’t realize the time involved in that learning curve. Be prepared to go out for 15 minutes at a time. Physically, it’s a matter of being able break down the progression of skills. Ski instructors and staff are trained in those steps.”

For the most part, Brad Fasbender agrees with McLeod and Sportsman, but he has had success teaching his own children to ski (yes, he can ski backwards). This is the start of his third season working with his 4-year-old son.

“We started Cameron at age 2, and I didn’t like teaching him,” Fasbender admits. “It’s difficult because they don’t listen to you, and they whine a lot.” The biggest success the first season was mastering the chair lift.

Last year Fasbender put him in a lesson, then spent six days on easy runs “doing ‘the pizza,’ plowing down the hill using the edgie-wedgie [a lock that clicks the skis together at the tips], and it worked really well,” he says.

“There was nothing better than watching him ski behind me, just being able to see all of his expressions.”

Cameron will soon be one of them. You know, them — the snowsuit-clad, cat-sized bundles in helmets who fly by us as we lie on the snow, recovering from a wipeout. How young are these speed demons, and how young should they be?

“We start lessons as young as 3,” says Sportsman. But Mount Spokane’s Mini-Mites programs (age 3 to 6) are more like outdoor group play dates. “They get ready together and go out for about an hour and a half, then come in, eat lunch and rest. The instructor takes them out again in the afternoon, and a lot of the kids don’t want to.” Sportsman says they don’t push it. “We use positive reinforcement, but we don’t force them to do something. We want to develop life-long skiers.”

“The ideal age depends on motivation,” says McLeod. “A 4-year-old who comes from a skiing family and gets left behind, they’re fired up and ready to go. But for a non-skiing family who only goes occasionally, 7 to 8 is a good age, because the kids are old enough to be relatively independent.”

McLeod says strength is a consideration, as well as children’s ability to carry their gear. Other experts say the extra weight of skis, boots and clothing can sap the energy of children younger than 5.

Both Schweitzer and Mount Spokane group children by age and ability, and have meeting places along the runs to ensure children don’t get lost or left behind.

Still, despite the best planning and guidance by skilled professionals, bad days happen; some kids are too discouraged to try again. How do we get them back?

“Let the instructors know the scenario so we can make the best placement to create a positive experience,” says Sportsman. “In some cases, we would encourage a private lesson,” to ensure safety and confidence.

“Start the effort at home,” adds McLeod. He suggests ski movies and videos, or online resources for kids like snowmonsters.com, and once they get back on the mountain. “Take them in or go home before they want to,” says McLeod. “If they leave while it’s fun, they’ll want to come back.”