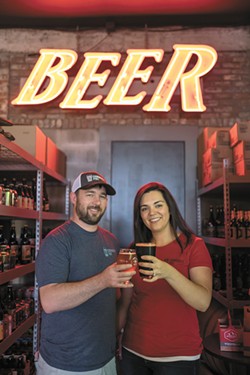 After sitting dormant for more than a year,

Workers from nearby businesses, along with friends of Community Pint owners TJ and Sarah Wallin, trickle in on a late Thursday afternoon to beat the heat and chat over pints of ice-cold beer from one of the 24 tap handles.

Open since the first weekend of August in the spot last known as the home of Jones Radiator bar, Community Pint finds itself a welcome addition to this pocket of downtown Spokane — an area that's poised for rapid growth as the adjacent University District expands in coming years with planned mixed-use projects.

Citing his own love of craft beer — both consuming it and making it as a homebrewer — Wallin was inspired to open Community Pint after visiting similarly modeled beer bars and bottle shops during frequent business travel to Portland.

"I thought Spokane needed one, and right after Jones closed I tried to get in here," he says.

Though its focus is on specialty beers from some of Wallin's favorite breweries across the Pacific Northwest, Community Pint also serves wine and hard cider. The only exception to its craft beer focus are tall cans of PBR.

"I just wanted to put really good stuff out, and have a good selection," Wallin says of the bar's tap list. "We want for people to walk out and have discovered they like a certain style of beer they'd never had before."

On a large chalk board above the bar, Community Pint's rotating tap list includes a few local names, but the majority of available beers are seasonal and special releases that Wallin says fellow beer lovers won't often find at other local restaurants, bars or retailers.

The Community Pint IPA, for example, is one brew that's only served here — it's a special release made just for the shop by TT's Old Iron Brewing, based in the Steel Barrel brewery incubator and taproom on the west side of downtown.

In addition to pours, Community Pint offers grunt and growler fills for the majority of beers on tap (those not listed for fills are higher-costing special or limited release beers).

Wallin and his wife, Sarah, bought the building in January, and worked through the first half of the year to spruce up the space. They removed a corner stage to make way for a retail area selling specialty bottles and cans (including cider and gluten-free beer), which can also be enjoyed on site. An office was taken out to bring the bar around in an L-shape, and a new walk-in refrigerator behind the bar holds all the kegs for Community Pint's 24-tap system.

As the new bar gets settled in the neighborhood, the couple plan to host local art receptions for First Friday. They're also excited to start partnering with a local nonprofit each month to receive a portion of proceeds from their special house IPA. ♦