It's a great season for music, with Black Happy, the Avett Brothers, Henry Rollins, and a reason to head north.

The annual RITZVILLE BLUES FESTIVAL on July 10 includes performances by Too Slim, Watermelon Slim, the Insomniacs, and Donna Angelle and Zydeco Posse. (JS)

For a city that so obsessively compares itself to its Northwest brethren, Spokane doesn’t spend a lot of time worrying about Calgary. Portland and Seattle, yes, but not this Canadian metropolis, just on the other side of the B.C./Alberta line and only an hour farther away than Boise, by car.

But Spokanites should take note. The “Nashville of the North” is home to a diverse population of around a million people, a thriving downtown and a ton of fun stuff to do. This is especially true in winter (check out the still-operational facilities of the 1998 Winter Olympics), but it’s also evident in summer, when cyclists take to the streets, cowboys take to their horses and the arts arrive en masse. (Don’t worry, they don’t speak much French here.)

Take, for example, the CALGARY JAZZ FESTIVAL. Put on by the grassroots organization C-Jazz, this year’s fest is bringing Chick Corea, Poncho Sanchez, Daptones Afro-Soul collective the Budos Band and Ben E. King (ever heard of “Stand by Me”?), among many others. The festival runs June 21-27 at about 10 different venues throughout town. Tickets are $15 for the cheaper shows, up to $60 for the headliners.

Things get even better the following month, when the city hosts the CALGARY FOLK FESTIVAL. Far from a mere hootenanny, the festival will host the Avett Brothers, Greg Brown, DJ Logic, Roberta Flack, Michael Franti, St. Vincent, Stars, the Swell Season and a heap of other up-and-coming indie, folkie and world musicians. The whole thing happens on seven different stages in Prince’s Island Park, right downtown. (July 22-25, $47/day, $165 for all four days).

It is no exaggeration to say that the BLACK HAPPY REUNION SHOW is the biggest music event happening in Spokane this summer — even if you don’t know who the hell they are. Fifteen years have passed since the CdA/Spokane band broke up — 20 years since its first show. And Paul Hemenway, singer/guitarist for the band, says they thought that mile marker was a great reason to do a reunion.

“All eight original band members will be together onstage for the shows, so it’s great for us to reconnect as a band and play together again,” he says.

So far two of the Seattle shows — on Aug. 20 and Aug. 21 at the Crocodile Café — are sold out. A third was added last week (and was not sold out at press time). The Spokane show will be held at the Knitting Factory on Aug. 6. (Tickets are still on sale at ticketfly.com.)

“Seattle and Spokane were our among our biggest markets in the ’90s,” Hemenway says. “And of course, being from Coeur d’Alene, Spokane was essentially our hometown.”

The band made the most of the Spokane music scene in the early ’90s, throwing notoriously high-energy, sweaty, youthful shows at the Met and the Big Dipper (now Empyrean). Their hard-rock-with-horns sound was unique then — and certainly isn’t mainstream now, either.

That’s probably what got them noticed. Black Happy’s two albums — Friendly Dog Salad and Peghead — supposedly edged out both Soundgarden and Alice in Chains in regional sales.

They landed a record deal, toured with 311, played CMJ and SXSW, became college-rock favorites and then, boom. Done. Fans were left confused as to what happened. The band was frustrated and road weary. Some left to form another band, Shoveljerk. The rest moved on.

Now Hemenway says the band is ready for action — just one more time.

“We’re really looking forward to seeing our fans again,” he says. “We are truly overwhelmed by the support we’ve been getting.” (LS)

Everyone’s got an opinionated, dominates-the-dinner-conversation uncle. Hell, I’ve got three. HENRY ROLLINS is kinda like that. The ex-Black Flag and Rollins Band vocalist has become something of a renaissance man in the last 10 years — book publisher, activist, actor and professional talker. He’ll perform his politi-comedy spoken-word act at the Bing Crosby Theater on June 22. Tickets are $20. Visit www.ticketswest.com. (LS)

An indie band that was lucky enough to be taken under the wing of Modest Mouse’s Isaac Brock, the MIMICKING BIRDS’ lo-fi folk sound is worth checking out for anyone who likes Brock, MM or Ugly Casanova. They’ll play the Empyrean on June 25. Watch www.myspace.com/empyreancoffee for ticket prices. (LS)

RUSSIAN CIRCLES, a Chicago-based instrumental post-rock group, is coming here. To Spokane! This is great news! With their third album, Geneva (a work of genius, in my opinion), the band solidified its relationship with bassist Brian Cook (Botch, These Arms are Snakes). They’ll play at Empyrean on July 7, and tickets ($8/$10) are available at www.brownpapertickets.com. (LS)

One of Spokane’s longest-running rock bands, BELT OF VAPOR, takes the show on the road this summer, with their new five-stong EP in tow. They’ll tour with ex-Spokanites The Ax (you know them as Horrible Disaster). Both bands kick off the trek with a show at the Seaside on July 9 (with newly revived locals, Limbs). Tickets are $5. 21. (LS)

I and Love and…

The AVETT BROTHERS cast a wide net. They’ve opened for jammy bands like Widespread Panic and Dave Matthews, and they’ve dragged pop acts like Portland’s Sallie Ford and the Sound Outside along on tour. A little folk, a little bluegrass, a little good ol’ RnR, the multi-talented band had a great 2009: Critics loved their album, I and Love and You — except for Pitchfork, but what do they know? — and the band was named the Artist To Watch of 2009 by Rolling Stone. Catch them at the Bing on July 20. Tickets: $30. Visit www.ticketswest.com. (LS)

I’m not much of a pop-punk fan, but I love anyone who loves The Goonies. THE ATARIS’ most popular record and first major label release, So Long, Astoria, references the ’80s cult classic. In fact, the band played last weekend’s 25th anniversary of the festival —right alongside Corey Feldman’s band. Dude. They’ll play Empyrean on July 20. Watch www.myspace.com/empyreancoffee for ticket prices. (LS)

Eight cellists who travel in a big tour van and who play Pantera and Outkast covers — among other totally bizarre songs to be played on cellos. PORTLAND CELLO PROJECT rocked the old Empyrean space last fall, and returns this summer for a second show on July 24. Watch www.myspace.com/empyreancoffee for ticket prices. (LS)

FRUIT BATS — the Sub Pop folk project of Eric D. Johnson and a handful of other musicians — is one of those bands that takes long stretches off but always comes back from them charged up and better than before. After a four-year hiatus, the band released their fourth album, The Ruminant Band, in late 2009. Hmmm. Seems appropriately named, doesn’t it? They’ll play the Empyrean on Aug. 12. Watch www.myspace.com/empyreancoffee for ticket prices. (LS)

The popular Spokane bluesman — known for his regular appearances at Bluz at the Bend — brings his show to the picturesque ARBOR CREST WINE CELLARS on July 18. All Arbor Crest shows start at 5:30 pm and go on until dark. Tickets are $5. (KT)

They’re a pretty big band to be playing a PARK SHOW — a free one at that on July 24 at Liberty Lake Pavillion Park. Popular ’90s college rockers, Big Head Todd & the Monsters, will rock a 90-minute set, hopefully including hits like “Turn the Light Out” and “Resignation Superman.” Check out www.pavillionpark.org for details. (KT)

When I think of the ’80s, I don’t think about hair metal or Spandex pants. Not at first. When I recall the decade of my youth, HUEY LEWIS AND THE NEWS’ “Power of Love” serenades me as I stroll in unflattering acid wash pants and a Swatch watch down memory lane. And only then is my mind free enough to consider hair metal and Spandex. Listen to your copies of Sports and Fore! (on cassette, of course) all summer to prep for Huey Lewis on Aug. 22 at Northern Quest Casino. (DW)

It’s not just who’s playing the bluegrass music that’s important. It’s the location. Bluegrass is about energy, yes, but it’s also about atmosphere. Waterfront Park at MEDICAL LAKE is the perfect location. Surrounded by pine trees, right next to the lake, it’s perfect for all that banjo twanging to carry across the water. The festival kicks off on the second weekend of August and features such bluegrass staples as the Dan Tyminski Band, Martha Scanlan and the Growling Old Men. Three-day passes cost $35, and proceeds go to several Medical Lake-based charities. Visit bluewatersbluegrass.org. (DW) 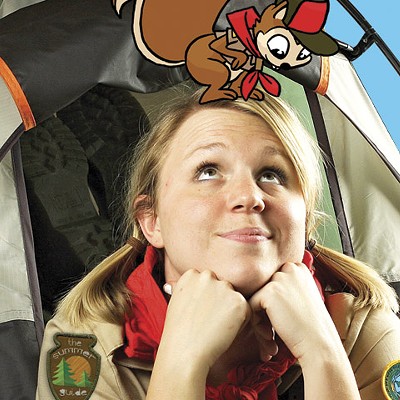 Summer in the Hinterlands

Summer on the West Plains

By Blair Tellers and Daniel Walters