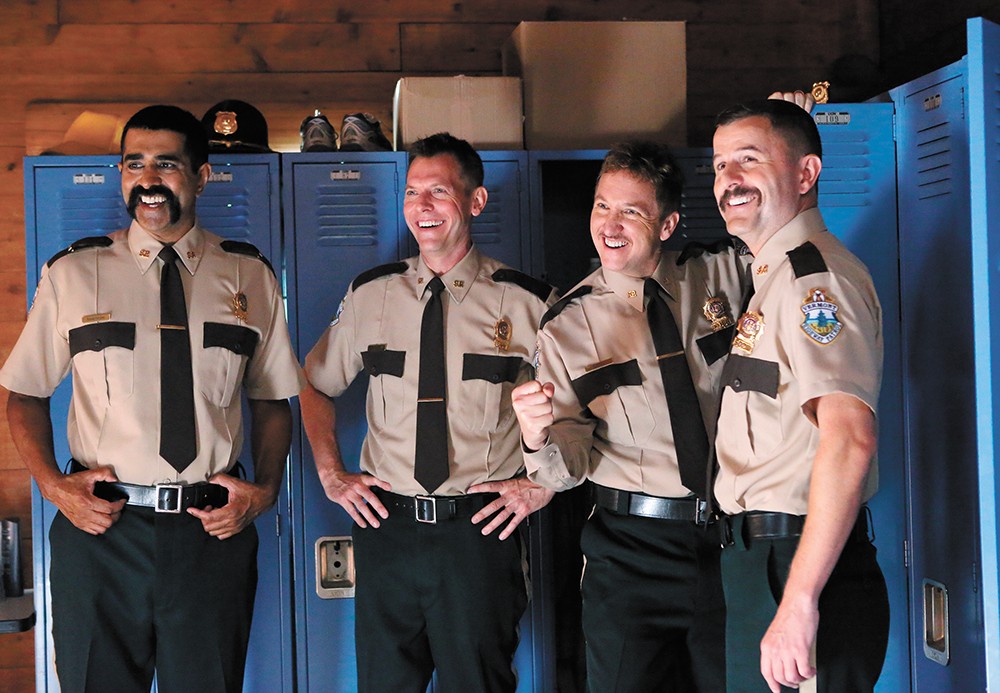 Super Troopers 2
So many dick jokes it's almost Freudian.

Super Troopers 2 was partially funded by an Indiegogo campaign, and having seen the finished product, I think all the donors deserve refunds — though I don't know what anyone expected. This is the long-delayed sequel to the raunchy cop comedy from 2001, and it contains more of the same loose, lowbrow shenanigans that have gained an inexplicable cult following. In fact, most of the jokes from the original Super Troopers are merely recycled wholesale here, only this time with the added stink of middle-aged desperation.

All the trigger-happy, mustachioed, prank-pulling Vermont highway patrolmen from the first film return, again played by members of the Broken Lizard comedy troupe, who also penned the script. We get a translucently thin plot about a chunk of Canadian land that's discovered to be U.S. territory, which inspires the officers to come out of forced retirement and stumble upon a drug smuggling operation. Oh, and Rob Lowe shows up in a bad wig.

You'd think after 17 years the Lizards could have come up with comic material more inspired than digs at Canadian accents, or endless strings of allegedly funny-sounding French words, or so many dick jokes that it's almost Freudian. It's a depressing experience, watching a bunch of dudes who are pushing 50 and still kneeing each other in the junk like frat boys on a bender.

Look, no one was hoping for sophistication when they dropped their hard-earned dollars to fund a new Super Troopers movie, but surely they weren't expecting something this lazy.

Super Troopers 2 is not showing in any theaters in the area.