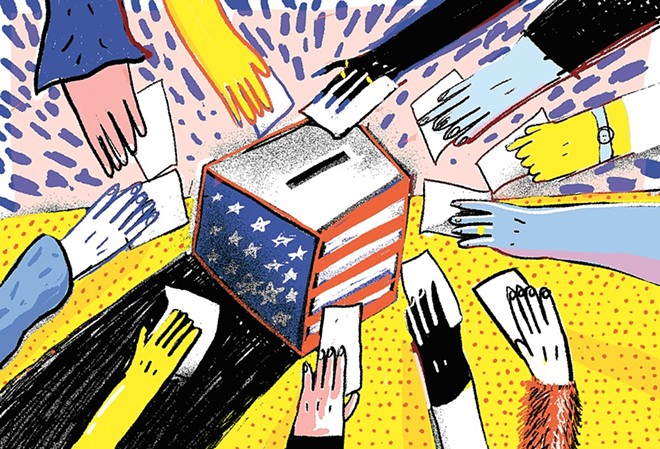 Caleb Walsh illustration
Ideally, this is what Spokane-area ballot drop boxes should look like.
ON INLANDER.COM

NEWS: Washington State University has hired a Seattle-based law firm to investigate whether gender bias or improper influence contributed to the departure of former Provost Mitzi Montoya, who served in the role for less than two months last year.

Big election energy
It's super Tuesday, which means that voters in a whopping 14 states — including delegate-rich states like California and Texas — are casting ballots in the Democratic primary race. Polls start closing around 7 pm Eastern Time. (New York Times)

COVID-19 anxiety
The U.S. Federal Reserve slashed interest rates on Tuesday amidst mounting fear of the potential economic fallout from the spread of COVID-19, marking the largest single cut since the 2008 recession. (New York Times)

Noise ordinance passes
In a 6-1 vote, the Spokane City Council approved a controversial noise ordinance in an effort to dampen loud protests outside of the Planned Parenthood Spokane Health Center. (Spokesman-Review)

Chief defense
Spokane Police Chief Craig Meidl defended an officer who was recorded on a body camera making comments about the attractiveness of women at a recent protest outside of the local Planned Parenthood. Members of the Spokane City Council were not pleased with Meidl's response. (Spokesman-Review)