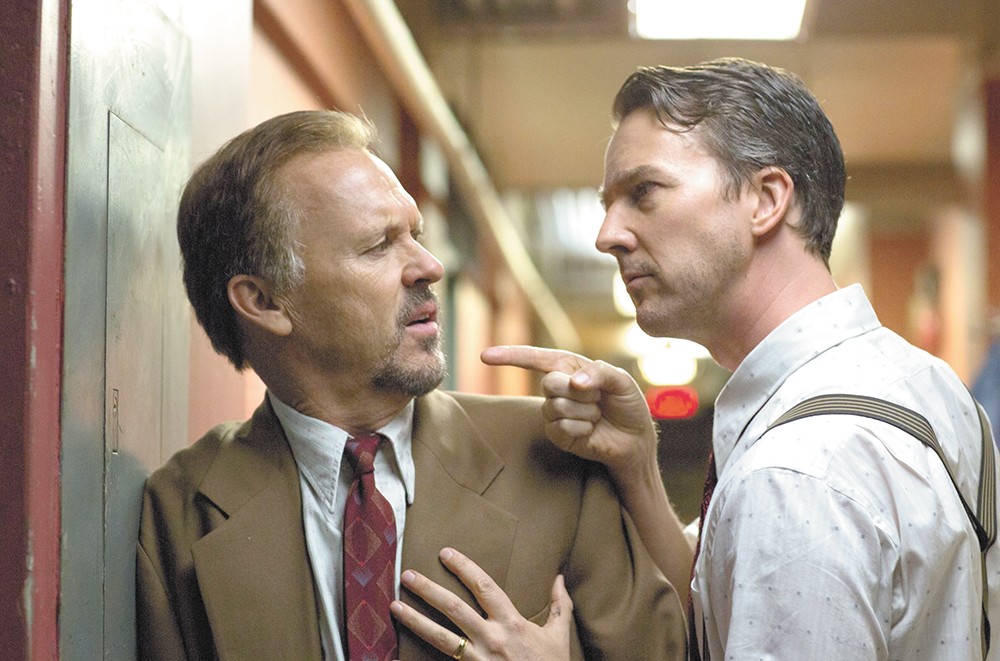 Keaton and Ed Norton face off in Birdman.

Michael Keaton is going to win an Oscar

OK, got that out of the way. Sitting down to watch this film, knowing nothing about it, I immediately got caught up in the emotions of the characters, the offbeat style of the storytelling, and the sometimes bizarre plot that saw things dipping in and out of reality and fantasy.

The movie involves acting, actors' egos, and movies versus stage plays, and it owes at least part of its emotional impact to the nasty little Raymond Carver short story What We Talk About When We Talk About Love.

Michael Keaton plays Riggan, an actor who made his name by portraying a comic book superhero named Birdman (yeah, Keaton played Batman twice), then gave up the movie franchise, floundered around for a long while and is trying for a comeback, doing anything but the superhero character.

That comeback, he hopes, will happen via the Broadway stage, where he's adapting, directing and starring in a play based on that Carver story. The play is the only thing he has left to live for. But his daughter Sam (Emma Stone), fresh out of rehab and now working as his assistant, has lost faith in him. His male costar, Mike (Edward Norton), is trying to steal every scene, sometimes because of his insistence on drinking lots of vodka, not water, when the script calls for vodka. Emotional complications ensue when two female costars in the play (Naomi Watts and Andrea Riseborough) become part of the already heated goings-on.

But the complications haven't even begun. Riggan must also deal with an inner voice, one that speaks the low, growling, unforgiving sentiments of Birdman, the fictional character he used to play, and who now wants him to get off the stage and get busy resurrecting the movie franchise.

The film is brimming with brilliantly constructed long takes that move characters around onstage, coast along with them through corridors and down stairways, and float with them on the streets of New York. Director Alejandro Gonzalez Inarritu (Amores Perros, Biutiful) and cinematographer Emmanuel Lubezki (Gravity) add both razzle and dazzle to the proceedings, but the sparks really fly when Keaton and Norton share scenes together, often in extreme close-up, and show what great and fearless acting is all about.

This is exciting, introspective and captivating adult entertainment of the highest order. One more thing to entice or perhaps confound you: Riggan can levitate objects, including himself. ♦

Birdman or (The Unexpected Virtue of Ignorance) is not showing in any theaters in the area.