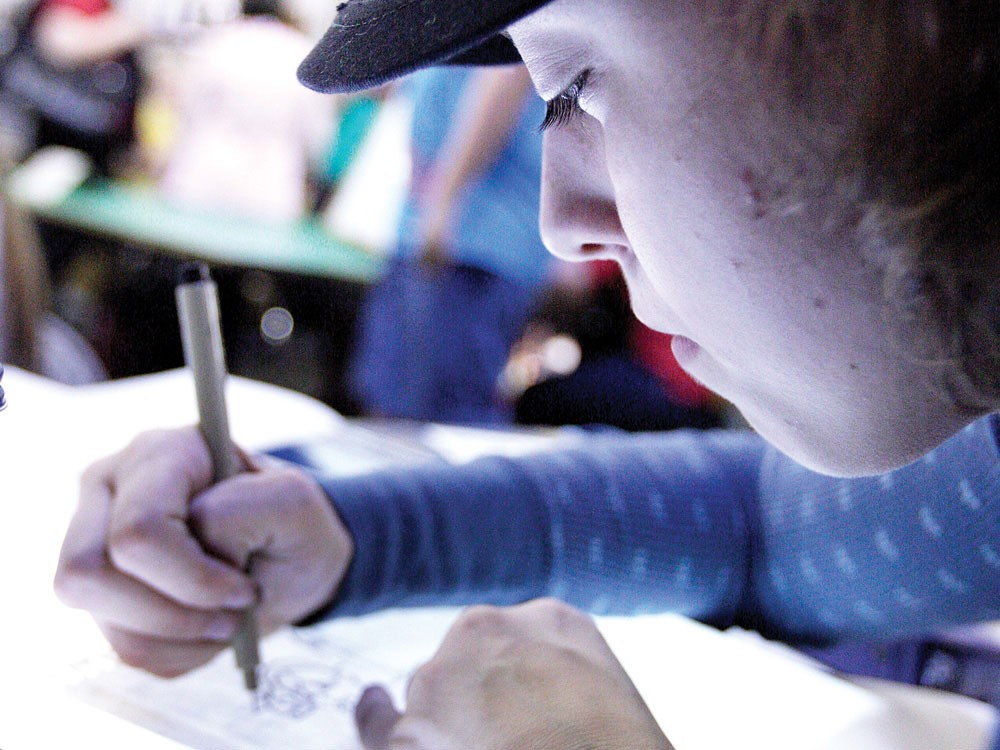 Young Kwak
Annie Absalonson, before slipping into her space jammies

See the work of some of the artists in this story

You wouldn’t expect him to grin while talking about his past: He has skeletons in his closet. Yet as Jeremy Whittington sketches in Merlyn’s comic book shop on a Saturday morning, he’s smiling like a man who’s simply happy to live out his childhood dream of making comics.

Others are sketching all around him, but from the start, Whittington’s comic attracts attention. The main characters are fembot supermodels called “Mechanized Organisms Designed for Exquisite Living,” or “M.O.D.E.L.” for short, as they “fight the evil forces of Nazism that lurk beneath the modeling world.” As a commentary on the fashion world, it’s brilliant.

As you get to know him, the size and sincerity of Whittington’s smile feels hard-won. He wears it like a badge of honor, as though he earned his smile the day he decided the mouth of a bottle would never again meet his.

Despite the subject matter, Jeremy’s comics mean something more to him than an outlet for snark. They are, in a sense, something to live for.

It’s a sentiment echoed by the other artists seated around him, each creating his (and, rarely, her) own unique comics. Andrew Taylor sketches out the trials of a man exploring what it means to be alone. His friend and fellow art student at Eastern Washington University, Allen Duffy, has chosen to chronicle the misadventures of two aged hicks as they explore the nuances of modern-day hipster culture. A woman named Annie Absalonson meticulously works up playful caricatures.

These four and nearly 20 others are partaking in what is essentially an Ironman competition for comic book artists.

The concept is simple enough. After gathering on Main Avenue at Merlyn’s (officially known as a “Science Fiction- Fantasy Store”), everyone has 24 hours to create an original 24-page comic book. It’s a feat that requires an insane amount of organization and attention to detail. Each page will not only need to be written, but inked and — in some cases — colored. The meticulousness of this process, paired with a lack of sleep and cramped hands, turn a challenging task into a marathon. Suddenly, 24 hours doesn’t seem so long, even for the professional artists in attendance.


At tables in the back of Merlyn’s, heads are bent down in concentration. It’s only an hour in, and progress comes easy.

The artists are a hodgepodge, ranging widely in skill level, technique, comic style and age. There is more than a four-decade gap between the oldest and youngest. In other situations, a group this diverse might find it hard to connect with one another. But these are comic book nerds, and they’re linked by the similarity of being collectively misunderstood.

“So many people are put off by us,” collector and artist Richard Breese says. He’s aware of the stigma. “They get this idea that we’re in our own little world — that we don’t know how to separate fantasy from the real world.”

In some cases, though, fantasy and reality don’t need separating. Quite the opposite.

For Whittington, comic artistry has replaced his selfdestructiveness. “I used to attribute my art to my drug use,” he says, recalling how he used to believe that getting loaded was necessary for him to create good art. Now he says he couldn’t have been here creating art like this if he was high.

For Andrew Taylor, “It’s nerd cred to do the 24-hour challenge.” His fascination with typography began with his graffiti art in high school. Since then, he’s set out to capture the beauty of letters and symbols; his comics feature words woven into art.

Allen Duffy, a seasoned comic veteran, expresses his quirky sense of humor in his comics, which caricature portly distance runners running naked. His work treads a thin line between icky and hysterical — tipping toward the latter, mostly because Duffy is so damn good at drawing.

Only two women are participating in the 24-hour challenge. Annie Absalonson is 19 years old, full of youthful zeal and seemingly unaware of her own beauty. The scars on her neck are from a bout with leukemia. Like Whittington, she’s open about the darker points of her life, but maintains a positive spin. “I hold the record at Deaconess for longest stay without dying,” she says, smirking.

“This is for your worst nightmares,” she says as she presents a design featuring an octopus with spider legs. She giggles, glancing down at the Spiderman shoes on her feet. Soon, she’ll be changing into outer space-themed onesie pajamas.


By the wee hours of the morning, the group in the back of Merlyn’s has entered a collective state of delirium induced by free energy drinks and Mountain Dew.

Like a watchful father, owner John Waite checks up on the challenge in his store. He’s happy, mostly because he’s provided a space for artists to mingle in an unfulfilled city.

“Sometimes this can be a solo road,” Waite says. “There are a lot of people really trying in Spokane — there’s just no money.”

But Waite remains intent on supporting his community, acknowledging the difficult market he faces. “You either diversify or you die,” he says, “and I don’t feel like dying.”

Around 8:30 am on Sunday, the last artist finishes.

After putting the final touches on his panels — and like each person before him — Andrew Taylor receives cheers from those still in attendance. Also, like everyone else, he finished exhausted.

Soon after, the group squints as they step out into a gray morning. A grueling 22.5-hour journey had come to an abrupt end. They’d shared meals, listened to others’ impressions of their work, fought off fatigue. Now, they felt a little sad.

But they also felt a sense of unity and group identity.

They’d been brave enough to express their true nerdy-ass selves.