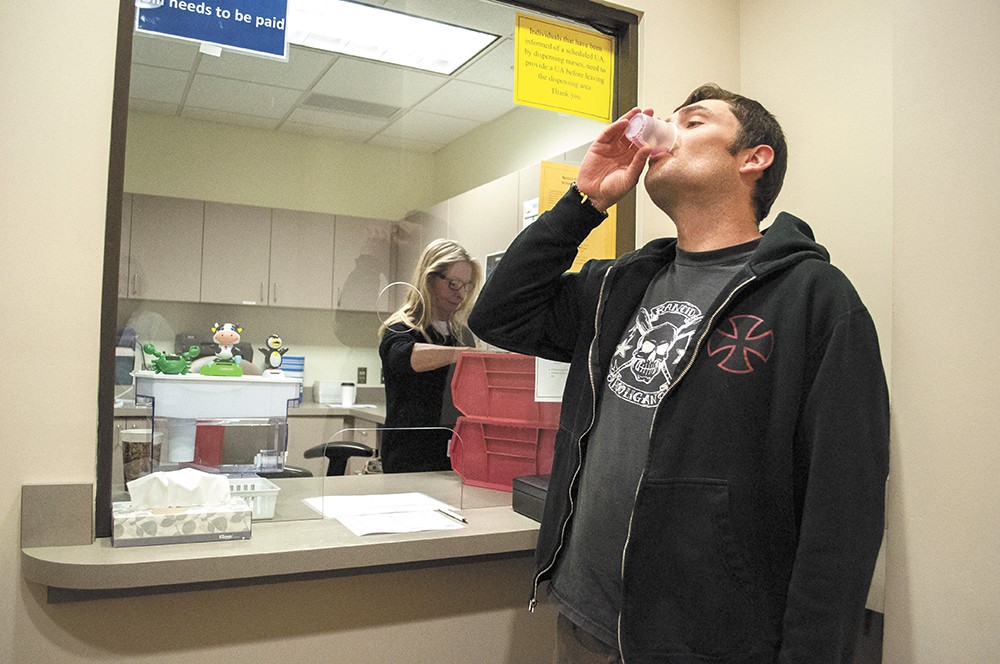 Jacy Worline had been experimenting with drugs since she was 12

when an operation on her gall bladder led to a prescription for Dilaudid, a high-strength opioid pain medication. The small white pills looked harmless, but she quickly started dissolving them in water and shooting up. When the Dilaudid ran out and the sickness set in, she transitioned to heroin. Soon she was selling herself on East Sprague Avenue to finance the habit. She quit using heroin seven years ago when a spot opened up at the Spokane Regional Health District's Opioid Treatment Program.

"I would be dead in a ditch with a needle in my arm if it wasn't for this place," says Worline, a 31-­year-old, stay-at-home mom.

Opioids, including Vicodin, opium, Oxycodone and methadone, all bind to the same receptors in the brain. Over time, those receptors grow to the point where the brain and the body need the drugs to feel normal.

"We all say we're trying to fill a hole," says Worline.

She is one of 600 patients currently being treated for opioid addiction at the Spokane clinic. There are 220 more on the waitlist, and the clinic is now making room for 100 more patients to meet some of the demand.

"You're talking a 90 percent relapse rate within six months," says Matthew Layton, OTP's medical director. "For a lot of people, it's lifelong treatment."

That means the clinic isn't constantly cycling through all its patients: some slots are occupied permanently. Those that aren't are full long-term.

"It's a chronic disease, and with that comes chronic treatment," says the health district's Treatment Services Administrator Julie Albright. "We have individuals who have been on the program for 24 years."

The high rate of relapse

makes methadone a safer treatment option for heroin addiction than quitting cold turkey, where a relapse often results in death. The CDC's National Center for Health Statistics reported in March that nationwide, heroin-related deaths shot up 39.3 percent between 2012 and 2013. From 2008 through 2010, there were 142 fatal overdoses in Spokane County, the second highest rate in the state.

"More people are seeking treatment for opioid use and heroin than ever before, and the legal evidence that police are finding is more heroin, heroin, heroin and less Oxys, Oxys, Oxys," says Layton. He just returned from the American Association for the Treatment of Opioid Dependence conference, where White House drug czar Michael Botticelli and the CDC declared a national heroin epidemic.

"We have an epidemic of opioid use, abuse and overdoses across the state, based on the increased rates and the level we are at overall," says Caleb Banta-Green, a research scientist at the Alcohol and Drug Abuse Institute of the University of Washington, by email.

A national study completed last year, led by researchers at the Washington University School of Medicine, found that opiate addiction has switched from a poor urban problem to a white suburban one, with 75 percent of users reporting that their addiction started with prescription opiates. As states and doctors became aware of the potential for abuse and started prescribing fewer opiate pain medications, users switched to alternatives like heroin.

To deal with the epidemic, more space is needed in methadone clinics. Here in Spokane, that space will arrive by September. The clinic is self-sustaining and the money to operate it comes from the patients. Total operating costs are a little over $3 million per year, according to Albright.

Six mornings a week, the clinic's patients fill the atrium of the Public Health building. There are families, young people and men in professional attire. Everyone sits patiently, waiting for their turn to enter the dispensary. Inside, a nurse watches as they drink their carefully measured dose of the cherry-flavored pink syrup. At first, patients come to the clinic six days a week. Later it's three days a week, and eventually it decreases to once every two weeks. The increased number of addicts seeking treatment after signing up for insurance under the Affordable Care Act is helping to enable the expansion.

began when he crashed his black-and-gold custom Kawasaki 750 Spectre in the early 1990s. A doctor prescribed him pills to deal with the pain. Eventually, the broken bones healed and the pain pills ran out.

"I just had this not-right feeling," Larsen says. He transitioned to heroin and eventually sought treatment in 1996. He has been battling opiate addiction ever since. At his lowest point, he pawned his mother's rings. Then one day he walked into nurse practitioner Susan Small's Rosalia office and left with monthly prescriptions for 300 tablets of Methadone, 278 30-milligram tablets of Oxycontin, and 178 .25-milligram tablets of Klonopin. He wasn't alone. In 2012, 54 percent of Small's 153 patients were prescribed at least one Schedule II drug, compared to a 10 percent average for all prescribers in the state.

After three patients overdosed and died, Small's dubious prescription practices came to light and her license was revoked in February 2014. Larsen's addiction remained.

"It's crucial that we focus on education and stigmatization," says Layton. "Doctors are playing a major role here; a huge portion of patients started on legitimate pain medications and were not told about the downside."

Jason, a baby-faced 35-year-old who spoke on the condition his last name be withheld, entered the program eight years ago. Since then he has finished school, become a certified public accountant, married, had a child and found a job as an internal auditor. His parents were skeptical about methadone at first, but grudgingly came to accept that the treatment seemed to be working.

He's been tapering his dose and hopes to get off methadone in the next few months.

"I think that this just provides the platform for people to work at their life," says Jason, "and get some distance from their environment where they're using and the friends they're using with." ♦