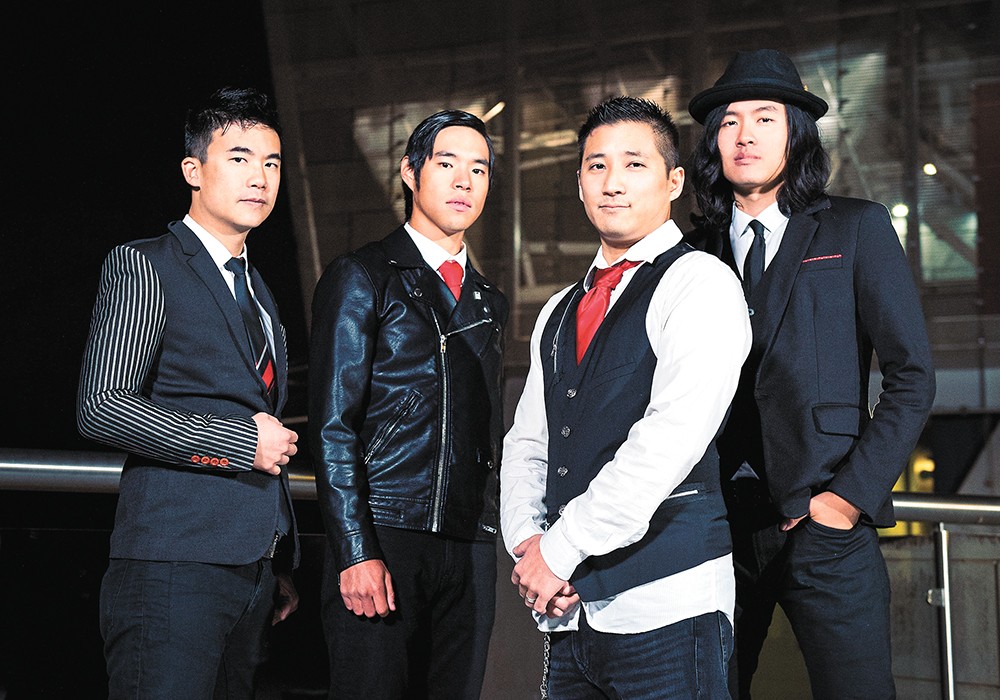 Sarah Giffrow photo
Simon Tam (left) and his band the Slants, who set legal precedents in their battle for a trademark.

that's as well known within legal circles as it is amongst pop-punk die-hards.

Earlier this year, the Portland dance-rock quartet were on the winning side of a landmark Supreme Court case, which was put into motion when Slants founder and bassist Simon Tam was denied a trademark for his band's name. The U.S. patent office deemed it derogatory toward Asian people, never mind the fact that all four members of the Slants are of Asian descent.

"They said it's because people looked at our faces and saw the name of our band, and they would only think of the racial slur," Tam tells the Inlander from a tour stop in Austin. "Basically, anybody could register for the name 'Slants' unless they were Asian. When they deliberately pointed out my race as a reason for denial, I realized I couldn't walk away from it.

"But nobody believed it was going [to the Supreme Court]. We thought it'd be over within a year."

The case was tied up in the legal system for several years, with an appeals court again denying the Slants a trademark in 2015. When the Supreme Court verdict ruling unanimously in Tam's favor was reached this summer, it was a cathartic end to a hard-fought battle.

"I didn't even know what to feel," Tam says of the verdict. "I didn't care if we get slammed in the press, and believe me, there were people slamming us. I knew that was the price of winning, was having people misunderstand. I knew that was going to be part of the deal.

"At the end of the day, I still had to do the right thing, even if people didn't totally understand."

It all started with, of all people,

Tam says he got the idea to start a swaggering Asian rock band after seeing 2003's Kill Bill: Vol. 1, and marveling at its depiction of Lucy Liu as the cold-blooded assassin O-Ren Ishii, backed by a masked Japanese gang called the Crazy 88.

"It was a very profound moment. It was the first time I'd seen an American film that depicted Asians as cool, confident and sexy," Tam says. "There are 17 million Asian-Americans, and not one at the time had graced the cover of Pitchfork or Spin. That's when I decided something needed to change."

So he started putting up posters around town and placing ads on Craigslist. It took two years for a lineup to coalesce, not only because Portland isn't exactly known for its racial diversity but because Tam had a lot of requirements for his applicants: You had to be Asian-American, you had to be passionate about your own culture, you had to have experience with a touring band, and you had to like synth pop.

Following their formation in 2007, the Slants stayed mostly under the mainstream radar, up until their legal issues thrust them into the national conversation about ethnicity and the appropriation of racial slurs. (Their case also determined that the Washington Redskins could keep their trademark.) The band's plight was covered in the New York Times and on a segment of The Daily Show titled "The Right to Discriminate Against Yourself," during which correspondent Ronny Chieng suggested even more offensive potential names than the Slants.

It's a juicy story, to be sure, but so many profiles of the Slants skip right over the qualities of their music, as if the band exists only to provide material for future law school textbooks.

The Slants' latest EP, released in the aftermath of the Supreme Court decision

, is cheekily titled The Band Who Must Not Be Named, which is both a nod to the band's legal battles and, as Tam explains, a tip of the hat to Harry Potter fans. It clocks in under 20 minutes, but it's loaded with shiny synths and sugary, sing-along choruses.

It would be easy to hear the lyrics of the record as the band's reactions to its own sudden notoriety, but Tam says only one of the EP's five tracks — the anthemic "From the Heart" — is a commentary on being thrust into the position of unsuspecting First Amendment advocates. ("No, we won't be complacent / It's a rock 'n' roll nation," vows singer Ken Shima.)

"It's a direct correlation to what we've been doing," Tam says of that track. "It's actually the only song we've written about the situation. It serves as our final statement on the battle itself."

Another of the EP's catchiest songs is "Fight Back," a rallying cry about resisting racial oppression that's certainly a rejoinder to the band's most vociferous critics ("Don't be their alibi / Don't feed their greedy mouth").

"The guitarist originally wrote it because he noticed I'd get bombarded with angry activists or people who took a different position, everything from white supremacists to militant leftists," Tam says. "And I'd interact with every single one of them, and some thought it was a waste of time.

"I thought it was a form of activism myself, expressing compassion for those with different beliefs."

And now Tam finds himself in an unusual position — as an indie rock star, a paragon for social justice and an unwitting fixture on the academic lecture circuit, regularly engaging in debates with lawyers and professors about the legal precedents set by his band.

"Because I've lived this every day for a decade and have read every document about the legislation, I probably know the law better than a lot of attorneys," Tam says. "But surprisingly, it usually goes really well. ... It probably helps that they have low expectations." ♦

Northwest BachFest: Across the Miles