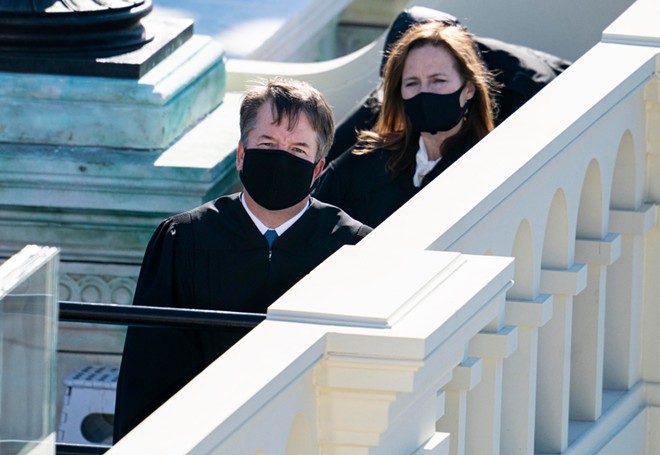 Ruth Fremson/The New York Times
Supreme Court Justices Brett Kavanaugh, left, and Amy Coney Barrett at the inauguration of President Joe Biden in Washington, Jan. 20, 2021. The Supreme Court ruled on Thursday that judges need not determine that juvenile offenders are beyond hope of rehabilitation before sentencing them to die in prison.

WASHINGTON — The Supreme Court ruled Thursday that judges need not determine that juvenile offenders are beyond hope of rehabilitation before sentencing them to die in prison. The decision, concerning a teenager who killed his grandfather, appeared to signal the end of a trend that had limited the availability of severe punishments for youths who commit crimes before they turn 18.

Justice Brett Kavanaugh, writing for the majority in the 6-3 ruling, said it was enough that the sentencing judge exercised discretion rather than automatically imposing a sentence of life without parole.

“In a case involving an individual who was under 18 when he or she committed a homicide,” he wrote, “a state’s discretionary sentencing system is both constitutionally necessary and constitutionally sufficient.”

No specific finding concerning the defendant’s maturity or capacity for change was required, he wrote.

The ruling drew a caustic dissent from Justice Sonia Sotomayor, who accused the majority of gutting two major precedents.

Thursday’s decision, Jones v. Mississippi, No. 18-1259, concerned Brett Jones, who had recently turned 15 in 2004 when his grandfather discovered his girlfriend in his room. The two men argued and fought, and the youth, who had been making a sandwich, stabbed his grandfather eight times, killing him.

In 2005, Jones was convicted of murder and sentenced to life without the possibility of parole, then the mandatory penalty under state law. That same year, the Supreme Court ruled in Roper v. Simmons that the death penalty for juvenile offenders was unconstitutional.

In 2012, in Miller v. Alabama, the court extended the logic of the Roper decision to ban mandatory life-without-parole sentences like the one imposed on Jones. The decision repeatedly criticized mandatory sentences.

In Montgomery v. Louisiana in 2016, the court made the Miller decision retroactive. In the process, it seemed to read the Miller decision to ban life without parole not only for defendants who received mandatory sentences but also “for all but the rarest of juvenile offenders, those whose crimes reflect permanent incorrigibility.”

After the U.S. Supreme Court’s decision in Miller, the Mississippi Supreme Court granted Jones a new sentencing hearing. The trial judge resentenced him to life without parole without saying in so many words that he was incorrigible.