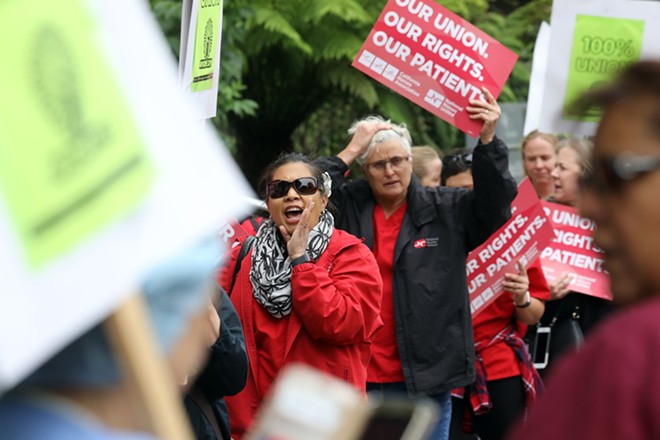 Jim Wilson/The New York Times
Members of the California Nurses Association protest in San Francisco on Wednesday, June 27, 2018, after a Supreme Court ruling seen as a major blow to organized labor. In a 5-4 decision, the court ruled that government workers cannot be required to pay for collective bargaining, which could cost public unions tens of millions of dollars.
By Adam Liptak
© 2018 New York Times News Service

WASHINGTON — The Supreme Court dealt a major blow Wednesday to organized labor. By a 5-4 vote, with the more conservative justices in the majority, the court ruled that government workers who choose not to join unions may not be required to help pay for collective bargaining.

“We conclude that this arrangement violates the free speech rights of nonmembers by compelling them to subsidize private speech on matters of substantial public concern,” he wrote.

The ruling means that public-sector unions across the nation, already under political pressure, could lose tens of millions of dollars.

“We recognize that the loss of payments from nonmembers may cause unions to experience unpleasant transition costs in the short term, and may require unions to make adjustments in order to attract and retain members,” Alito wrote. “But we must weigh these disadvantages against the considerable windfall that unions have received” over the years.

Justice Elena Kagan summarized her dissent from the bench, a sign of profound disagreement.

“There is no sugarcoating today’s opinion,” she wrote. “The majority overthrows a decision entrenched in this nation’s law — and in its economic life — for over 40 years.”

“As a result,” she wrote, “it prevents the American people, acting through their state and local officials, from making important choices about workplace governance. And it does so by weaponizing the First Amendment, in a way that unleashes judges, now and in the future, to intervene in economic and regulatory policy.”

The majority based its ruling on the First Amendment, saying that requiring payments to unions that negotiate with the government forces workers to endorse political messages that may be at odds with their beliefs.

Unions say that reasoning is flawed. Nonmembers are already entitled to refunds of payments spent on political activities.

The decision struck down an Illinois law that required government workers who chose not to join a union to “pay their proportionate share of the costs of the collective bargaining process, contract administration and pursuing matters affecting wages, hours and other conditions of employment.”