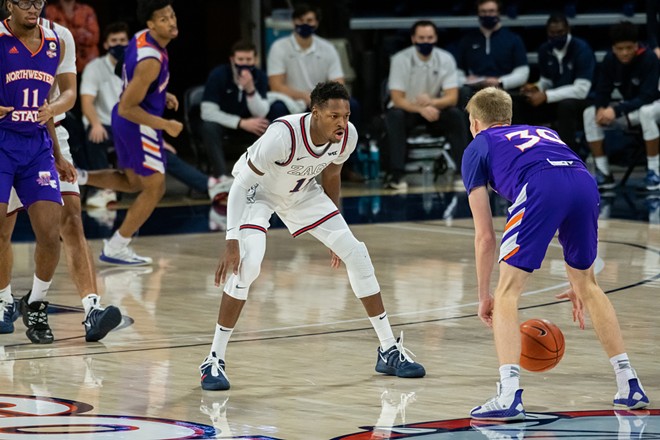 Erick Doxey
Don't look now, but Gonzaga's defense is catching up to its offense.

Over the weekend Gonzaga put up 100 points on the road against San Francisco, marking the fourth time this season the Zags have reached triple-digits in scoring. The Zags’ offense is elite, and they’ve made that clear all season long. Saturday against the Dons, despite the scoring output, the story was on the other end of the court.

“I’d rather talk about our defense,” head coach Mark Few said after the game. “I thought our defense was great tonight.”

It was great, and the Zags held San Francisco to 61 points, but it wasn’t the first time that it’s been great. Gonzaga has been steadily improving on the defensive end all season long. Now, with half a month left until March, it’s fair to say that the Zags are elite on both sides of the ball, not just at the offensive end.

College basketball statistical consultant and data visualization guru Jack Gilles noted this in a tweet after Saturday’s win over San Francisco. Month over month this season Gonzaga’s tightened it up defensively. In two games during the month of November, Gonzaga’s defensive efficiency rating — the number of points the other team scores against the Zags, on a per-possession basis — was 0.99, a rating that would put the Zags’ defense outside the top 100 nationally were it still the case today.

But it’s not the case anymore, because in December the Zags’ defensive efficiency rating fell (smaller numbers are better here) to 0.94. It dropped again the next month, to 0.89 over eight games in January. So far this month it’s even lower, at 0.86 over three games.

Think back to the start of the season, when Gonzaga was winning impressive games but doing so by simply outscoring their opponent. Yes, that’s how you win basketball games, but they weren’t stopping their opponents from scoring. Defensively, the Zags weren’t very impressive in the early going. They beat Kansas by 12, sure, but the Jayhawks scored 90 points in that game. Three games later, Iowa scored 88. In the early part of conference play the Zags allowed Portland, far and away the worst West Coast Conference team this season, to put up 88 points as well.

Since then, they’ve given up more than 70 points just twice. To BYU and Pepperdine, too, the two teams with the most offensive firepower in the league. Now, despite those high-scoring early contests, the Zags’ season average for points allowed has slipped just under 70, to 69.3 points per game.

Some of that has to do with the teams Gonzaga’s been playing since the calendar flipped to 2021. They went from the Kansases and Iowas to the Portlands and San Diegos. It’s not as hard to shut down the teams they’re playing these days because they’re simply just not as good as the teams they played to start the season.

That’s not all of it though. This has been a season-long trend of defensive improvement for Gonzaga. Gilles’ observation after the San Francisco game showed that. And Pomeroy’s computers, which take into account the level of competition, consider the Zags as a top-five defense in the sport. Which is a pretty nice position to be in entering the home stretch of the season.

After five straight on the road, the Zags are back in The Kennel for a pair of games this week. On Thursday at 6 p.m. they’ll play host to arch-rival Saint Mary’s on a to be determined ESPN network and then it’s a 5 p.m. Saturday showdown with San Diego on ESPN2.

After narrowly missing the playoffs, will the Mariners even try to make a free agent splash?