Jeff Creighton and the MAC are digitizing thousands of historic photos, starting with the Libby collection

It doesn't take much to realize just how daunting a task the Museum of Arts and Culture is undertaking in digitizing its massive collection of photographs and negatives, a project highlighted by the online archiving of the Charles Libby Photographic Collection.

Just take a stroll through the museum's archives with Jeff Creighton, the historian who's been working on the project for the past 18 months, and you wind up opening drawers full of photocopied images, pulling open boxes that haven't been cracked in decades, spinning wheels that move giant bookshelves populated with slides, negatives and prints, and exploring coolers set to between 30 and 40 degrees to protect the ancient acetate and nitrate photo negatives inside.

You see nooks and crannies of the MAC the public never does when it visits the museum, and while the tens of thousands of images seem to be strewn on multiple floors in various formats and in an array of media, this is actually a highly organized system compared to what Creighton found when he started the imaging project.

Creighton and various interns and part-timers spent months "going through every folder and every box and counting every photograph" to determine just what the MAC — or more specifically, the Joel E. Ferris Research Library and Archives — had in its possession.

Libby is of particular importance because his photos illustrate the development of downtown Spokane from roughly 1900 to 1971, the vast majority of them taken early in the 20th century.

"That's when there was a lot of building going on. The old City Hall, Montgomery Ward. He must have taken a photo of every business downtown, two or three of each," says Creighton. "Libby pretty much documents the building of the infrastructure of downtown Spokane," he says.

As Creighton strolls through the various places where the photos reside, he tallies numbers in his head. In one of the cold-storage spaces, he found 33 boxes of unprocessed acetate negatives that hold images Libby took between 1934 and 1951; he estimates there are from 10,000 to 12,000 never-before-seen pictures just in those boxes. In another spot, he has 18 boxes dominated by portraits Libby took between jobs shooting buildings and construction projects. That's another 20,000 images to add to the list. All told, Creighton puts the number of Libby photos on hand at nearly 90,000.

The Libby photographs are definitely the most popular among the historians who come to the MAC looking for old images of Spokane, and they mostly want shots from the 1920s and '30s.

Using an 8-terabyte server and a couple of iMacs bought for the project, Creighton's team has been meticulously digitizing and storing images and attaching simple search terms to the Libby photos, as well as the Dick Lewis collection of photos of the Plateau tribes, and photos by Frank Guilbert and Frank Palmer, among others. In the next few weeks, the public will be able to look at, purchase and print pictures of historic Spokane and the surrounding areas, all from their computers — a process that used to take an incredible amount of work.

"I'm anticipating this can be a real boon [for the museum], because it's just been local or regional people who have known about this collection [to date]," Creighton says. "When this thing goes worldwide, there are a lot of folks who will want these photos."

Creighton figures about 70 percent of the Libby collection will be uploaded and ready for browsing in the coming weeks, along with some smaller collections from other photographers.

"Once it goes live, we'll still be indexing," Creighton says. "We'll be adding other collections. Not huge collections, but they're pretty cool photos." ♦

STAGE TO SCREEN: THE AUDIENCE 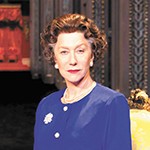 British government and the royal family can seem mysterious to Americans, but a Tony-nominated bit of drama starring the always excellent Helen Mirren might be a perfect vehicle to help us Yanks get a peek behind the curtain. The Audience is a dramatic interpretation of real-life meetings that Queen Elizabeth II has had weekly with all 12 prime ministers who have served during her time on the throne, including old bulldog Winston Churchill and modern, familiar faces like Tony Blair. The Friends of the Bing bring Mirren and her co-stars live to the theater's ultra-high-definition screen for this special event. Bing Crosby Theater, $10/$5 for students, 2 pm (DAN NAILEN)

If you're looking for an excuse to dress up, then head to the American Laboratory Theater's live, staged production of the Rocky Horror Picture Show. Just make you sure that when you dress up, you're wearing stockings, a basque and high heels. This year marks the 40th anniversary of the cult classic musical, so join the following and take part in the interactive live stage production. The show may not suitable for all ages and audiences. (ER) Panida Theater, $14-$20, 8 pm (ERIN ROBINSON)

SYMPHONIC FILMS AT THE FOX: NOSFERATU

Under the direction of Jorge Luis Uzcàtegui, the Spokane Symphony again brings a riveting and spooky soundtrack to a horror film — this time the 1922 black-and-white film Nosferatu. This silent film is an adaptation of Bram Stoker's Dracula. The German Expressionist horror flick came to be known as a masterpiece and is quite rare. Filmmakers never received the rights to the novel, so Stoker sued and most copies of the original film were destroyed. Last year, the Spokane Symphony got rave reviews for their live accompaniment to Psycho; there's a good chance that this show will be equally unforgettable. (ER) Martin Woldson Theater at the Fox, $15-$30, 7:30 pm (ER)

Cameras have been allowed inside the Vatican museums and Sistine Chapel, giving audiences around the globe the opportunity to view timeless, world-famous art without the plane ticket. This 3-D film experience is made possible by the artistic collaboration of James Cameron and Tim Burton with the Vatican Museums director, Professor Antonio Paolucci, who leads viewers through the museums' past, present and future. During the film, audiences can gaze upon paintings by da Vinci, sculptures from Fontana and the frescoes of the Last Judgment painted by Michelangelo. Experience a foundational part of Italy without leaving Spokane. (ER) Bing Crosby Theater, $10, 1 pm (ER)

Coming to the big screen at the Bing Crosby Theater is Academy Award nominee Benedict Cumberbatch in the National Theatre Live's production of Hamlet. The play, directed by Lyndsey Turner and produced by Sonia Friedman Productions, will be broadcast live in cinemas throughout the U.S. As lead character Hamlet, Cumberbatch is faced with a difficult decision following the murder of his father, as he must both avenge his father and prepare his people for war. Take the whole family out for a night of world-class stage production in this rendition of the Shakespeare classic. Bing Crosby Theater, $10, 2 pm (MC)

Pop country's rising new artist Nicole Lewis (left) is coming home to Spokane. After gaining fame from winning Washington's Gimme the MIKE! competition, Lewis' popularity in the world of country is growing steadily. Lewis is set to perform alongside the oldest community-supported big band in the nation, the Spokane Jazz Orchestra. The SJO and its swinging, upbeat sound, mixed with Lewis' fresh new take on pop country, should have fans singing and dancing along. Bing Crosby Theater, $24-$26.50, 7:30 pm (KAILEE HAONG)

Beethoven's late string quartets (Nos. 12-16) were the final pieces written by the famously deaf composer. While they are now considered among his best musical works, audiences dismissed them at the time. The music is dark, depressive, dense and daring — a mental challenge for listeners from any century. Spokane's own professional string quartet takes on the beastly and incredible String Quartet No. 13 in B-flat Major, all six movements of it, for their season opener this month. Also at the concert, Cary Boyce, president and general manager of Spokane Public Radio, is playing Nightshade. Martin Woldson Theater at the Fox, $12-$20, 3 pm (LJ)

The pianist sits down at the bench. The 50-some pages of the piece are all there in memory. Soon the music pours out of his fingers and he's lost for the next 16 minutes in one of the most iconic American compositions of all time: George Gershwin's Rhapsody in Blue. This is exactly what will happen when German pianist Andreas Boyde joins the Spokane Symphony this October for its celebratory American Wonders concert. The score's thunderous lines, sumptuous interludes and jazzy overtones keep you on the edge of your seat from start to finish. And yes, we're talking about a classical piece of music. Martin Woldson Theater at the Fox, $15-$54, Oct. 10, 8 pm; Oct. 11, 3 pm (LJ)

Every year the Whitworth Jazz Program brings in big-name jazz artists to perform alongside the university's ensemble in Spokane. This year is no exception. Twenty-time Grammy-winning jazz guitarist Pat Metheny joins the Whitworth University Jazz Ensemble at the Fox Theater, performing several of his most famous originals and jazz standards. Metheny is the only artist to win Grammy awards spanning 10 categories, ranging from Best New Age Album to Best Country Instrumental Performance. This fact speaks to his unparalleled versatility and ever-evolving experimentation within the genre of jazz. Martin Woldson Theater at the Fox, $23/$18 for students, 8 pm (MW)

There's a reason the plot of La Bohème may seem familiar to you — it's the basis for the smash hit musical Rent, after all. But instead of battling AIDS in New York City, the characters in La Bohème take on tuberculosis in Bohemian Paris. This fall's semi-staged version of Giacomo Puccini's famed dramatic opera (one of the most frequently performed worldwide) is a collaboration between the Spokane Symphony and Opera Coeur d'Alene and also includes the Spokane Symphony Chorale. This is a perfect introduction to the world of opera. Prepare to weep. Martin Woldson Theater at the Fox, $15-$54, Nov. 21, 8 pm; Nov. 22, 3 pm (LJ) 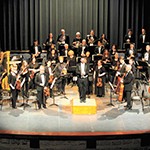 Accompanied by the Mid-Columbia Mastersingers, the Washington Idaho Symphony rolls through the Palouse for its 2015 family Christmas concert. Recognizable classical composers on the program include Franz Joseph Hadyn, and Bach ("Gloria in Excelsis Deo"). Ending in a family carol sing-along, this festive holiday event brings the cheer to Washington State University's campus. Bring the whole family for this festive night of music and song. Jones Theatre, Daggy Hall, WSU Pullman campus, $10-$25, 7:30 pm (MC)