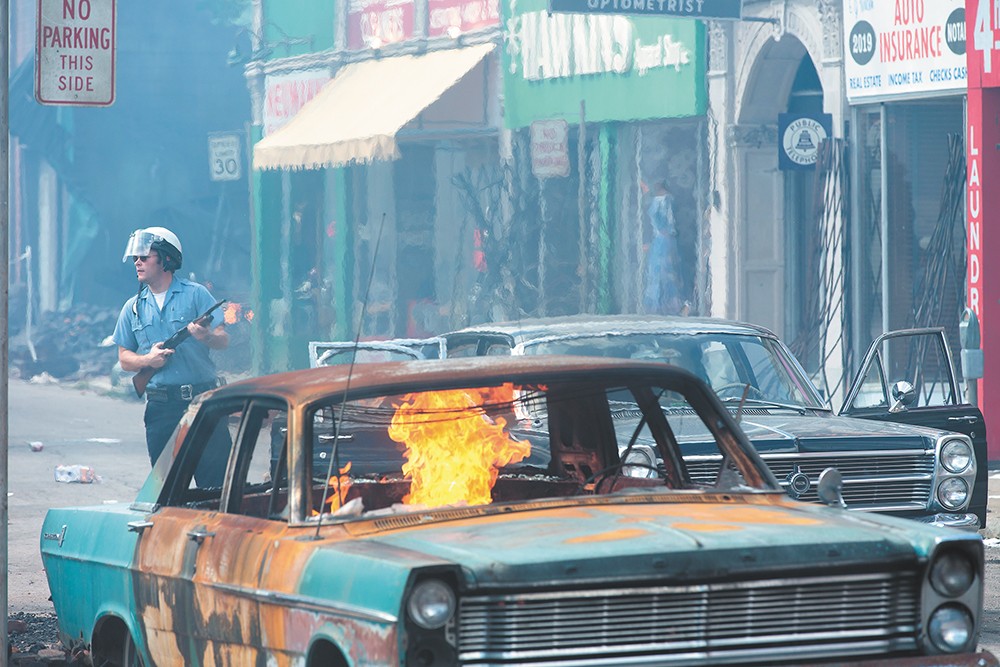 with The Hurt Locker and Zero Dark Thirty, Kathryn Bigelow has turned her directorial eye to American soil. But don't be fooled by the red, white and blue setting: Detroit is also a war movie. This time the combat zone is the titular city during 1967's 12th Street Riots, specifically the horrors that took place during one July night at the Algiers Motel.

Following an artful opening sequence that employs the vivid paintings of artist Jacob Lawrence's Migration Series, viewers are dropped into inner-city Detroit as racial tensions between the white police force and black civilians simmer in the summer heat. Following the raid of an illegal after-hours nightclub, the neighborhood's response to their people being herded off in paddy wagons quickly escalates into full-blown riots. Between the looting, buildings being set ablaze, the National Guard rolling around in tanks and the rubble of destroyed structures, there's no getting around the simple truth — the city has become a battlefield.

All of this leads to a fateful night at the Algiers Motel. After establishing a series of characters — including an aspiring Motown crooner and his buddy, a pair of young white female friends and a lot of seedy motel residents — all hell breaks loose when police assume that starter-pistol shots are actually sniper fire coming from the Algiers. Soon, three sketchy cops are on the scene, one of the black men is dead, and the rest of the people in the motel are forced to put their hands and heads against the wall and begin enduring the worst night of their lives. Nearly two hours of police brutality, intimidation and murder follow.

Bigelow makes everything about this extended scene feel sweaty, crowded and agonizing. She has no intention of letting the viewer escape the palpable anxiety that each of the "suspects" feels. For all the tension Bigelow creates with her images, the script by her frequent collaborator Mark Boal struggles at times to not feel a bit generic. There's an unseemly amount of less-than-subtle telegraphing that undercuts some of the shock when these horrifying events actually transpire, making some of the proceedings feel a bit Hollywood, rather than authentic.

However, the acting helps make up for the screenplay's shortcomings. John Boyega portrays Melvin Dismukes, a security officer struggling to straddle the line between his black brethren (who think of him as an Uncle Tom, even when he's helping them) and law enforcement (who see him as just another black man, who happens to be in a uniform). When Dismukes shows up at the Algiers after hearing shots, he attempts to calm the scene as a go-between, and Boyega aptly manages to display both a sturdy, heady exterior and his trembling nerves.

Playing Krauss, the ringleader of the racist cops, Will Poulter so effectively embodies a brand of pure human evil that it may be difficult for him to shake the role going forward in his career. (On a similar note, if you're a huge fan of Jim from The Office, John Krasinski's solid turn as the cops' lawyer in the film may ruin your fond memories of him.) But it's Algee Smith as aspiring singer Cleveland Larry Reed who serves as the emotional heart of Detroit, conveying the terror, tragedy and broken dreams that come to define the night.

It's supposed to be hard to watch Detroit's police brutality, and that's exactly what makes the movie relevant. When the President literally encouraged police to be more violent last week during a speech to officers on Long Island, Detroit felt of-the-moment. And when the film's courtroom seems frighteningly similar to recent trials regarding the deaths of Philando Castile or Freddie Gray or Trayvon Martin, Detroit resonates.

It may be a movie about a historical event, but we're living the history right now.♦

Detroit is not showing in any theaters in the area.