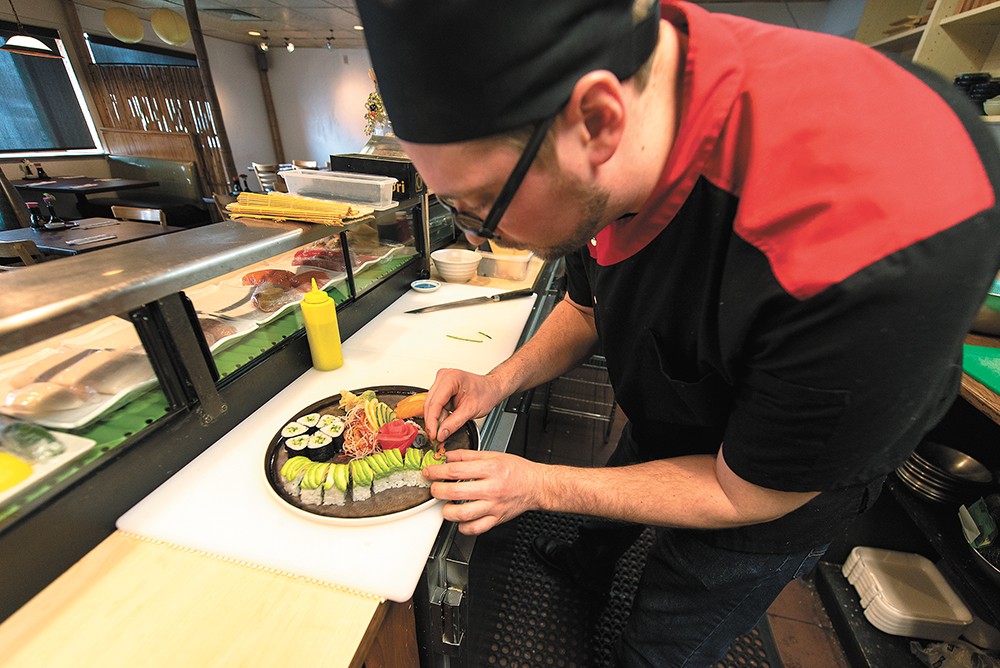 just days after the shuttering of its building's former tenant, Yuzen Sushi Restaurant.

While sushi — nigiri, sashimi and rolls — is still a menu staple at the new Aji, diners will also find an extensive list of Japanese and Asian fare that includes teriyaki, katsu and tempura meals ($9.95-$11.95), noodle and rice bowls ($8.95-$16.95), and other traditional dishes from the island nation, some of which Aji owner Kevin Phang says can be harder to find in Spokane. He lists Japanese curry dishes and okonomiyaki, a savory, layered pancake, as examples.

"It's family-style Japanese food," Phang says. "We wanted to make our menu different, and targeted for larger groups, so it includes meat and barbecue and a lot of Japanese starter appetizers and small items."

Most of the entrées, like the teriyaki meals, which come with a colorful side salad, are large and easily shareable. Customers have also taken notice of Aji's expansive menu, as compared to what they remember of Yuzen's offerings, Phang says.

Erick Doxey
One of the chef's creations.

The transition between Yuzen, which had occupied the small building on North Division near NorthTown Mall since 2011, and Aji happened quickly. Phang says the family who owned the former restaurant — they also operate a location on Mercer Island, near Seattle — had been trying to sell it for some time. Phang, meanwhile, was looking to make a transition from his longtime career in international business to something that would keep him closer to home and his children.

Having spent the bulk of those 18 years working with clients in the Asian marketplace, Phang says he often ate at restaurants in Japan and Korea, among other countries. Considering that experience, friends encouraged him to open a restaurant in Spokane, so Phang spent about six months working for a restaurant-owner friend to learn the nuances of managing an eatery.

When the building's landlord finally approved the business transition back in early February, Phang opened Aji three days later. Several of Yuzen's former staff, including its sushi chef, were retained through the change. Because of that quick transition, the inside of the restaurant hasn't changed much since he took over. Phang plans to gradually update the interior and exterior as time goes on. His main goal is to make Aji — named after his grandmother, Aji, who was beloved in her Japanese village for sharing home-cooked meals with friends and neighbors (aji is also a Japanese word for flavor or taste) — a welcoming and comfortable place where diners and families want to come and spend time together over a long meal.

"You go to restaurants and the bottom line is, you want to feed yourself and be comfortable and satisfied," Phang says. "We don't want to forget about that. We want people to stay for at least one hour, or maybe two, with good friends or family." ♦