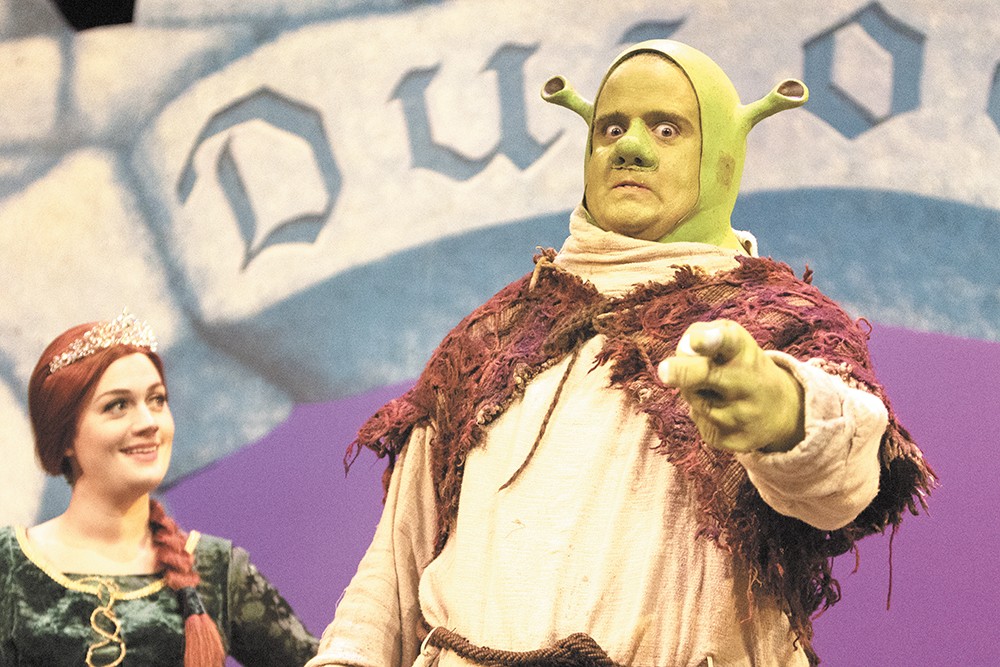 Shrek The Musical was nominated for eight Tony Awards. Adapted from the immensely popular Dreamworks series, Shrek offers its patented family-friendly, anti-fairytale, fart humor without apology, live and for the stage.

Getting past its tired source material (it has been 14 years, after all), Shrek The Musical — a production of the Coeur d'Alene Summer Theatre playing Aug. 6-23 at the Kroc Center — is loud and robust and impossibly fun, as equally vibrant as it is bombastic.

As in the original film, Shrek (Erik Gratton), an outcast ogre, finds his quiet swamp overrun by a horde of rowdy refugees. Pinocchio, the Big Bad Wolf, the Three Pigs and a host of other fairytale characters claim that the villainous Lord Farquaad (played here by CST's artistic director, Jadd Davis) persecuted them off their land. Shrek is forced to confront Farquaad; on his way he meets the spastic, friendless Donkey (John Devereaux). Striking a deal with Farquaad, Shrek and Donkey must rescue Princess Fiona (Liz Shivener) from a dragon-protected tower, from which she is held captive, and return her promptly for marriage.

Kasey Davis directs and choreographs a tight performance from an ensemble cast numbering nearly two dozen. Rousing numbers like "Story of My Life," "Freak Flag," and "I Know It's Today" are wonderfully performed, fueled by the impressive orchestra that Dorene Dundas directs and conducts. Gratton gives a fine performance as the eponymous ogre, though his chemistry with Devereaux as Donkey leaves something to be desired. Shivener (who also played the princess on the national tour) absolutely lives in her role as Fiona. It is Davis as Lord Farquaad, however, who often steals the show, earning the biggest and most memorable laughs.

On its surface, Shrek The Musical is nothing more than a cheap attempt to wring the last laughs out of a worn franchise. But deeper themes are at work here — self-acceptance, parental failure, diversity — even if they're not always prevalent or well defined. They are there for the taking, but never enforced, given to those in the audience hungry for a bit more substance.

Certainly, this musical engages audiences of every age with the easy entertainment that comes from big, colorful (familiar) productions, but that's fine. Leaving Shrek The Musical behind, you realize that, like the green ogre himself, this production is entirely comfortable in its own skin. ♦