In honor of Labor Day, we spent the morning with a mobile slaughter truck. Things got messy. 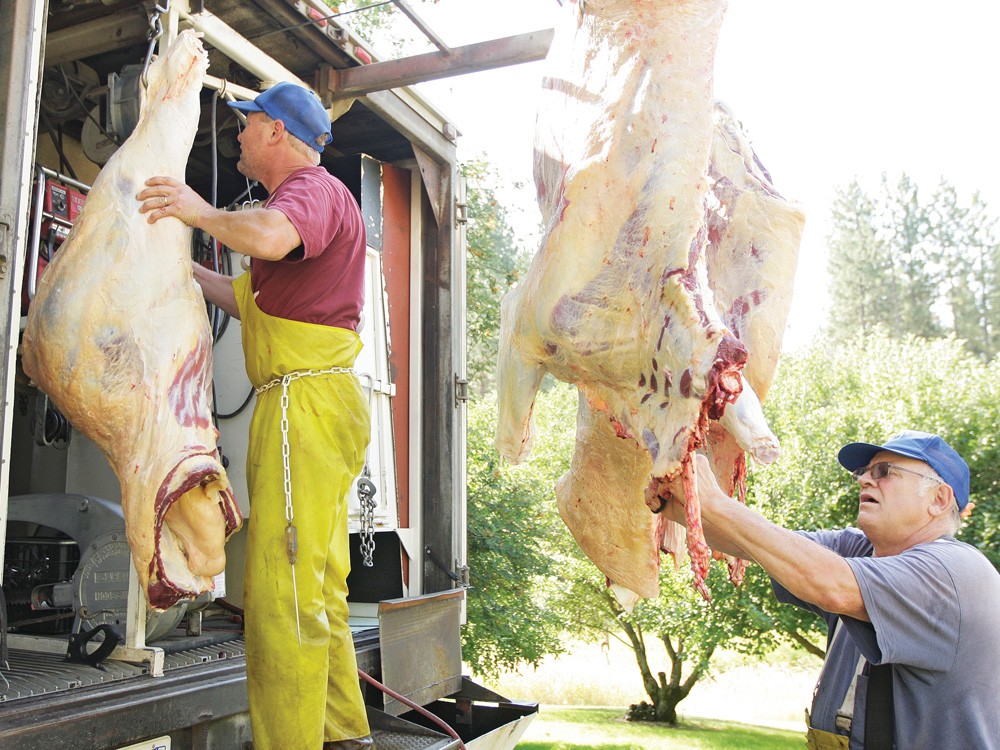 The first cut is the deepest. One jab through the spinal cord and then a quick slash across the throat. Neon pink blood sprays fast and hard from the sheep’s throat, soaking the bottom of Jeff Wilke’s bright yellow rain slickers and rubber boots.

The sheep kicks up a cloud of dust and gurgles for about a minute until it dies. Wilke kneels with one leg on its chest until the end. Then he cuts off its head.

Wilke, 44, and his father, Ken Wilke, 66, own and operate a mobile slaughter truck and packing company called Quadra-K-Meats. Every Monday, the duo travel from farm to farm and slaughter livestock — cows, pigs, sheep, goats and the occasional llama or buffalo — and then take the carcasses back to the shop in their refrigerated slaughterhouse-on-wheels for further processing.

Today, at the farm of Andrew Pille, near Medical Lake, Wash., they’ve slaughtered four sheep. And it’s only 9:30 am.

Ken is a soft-spoken butcher in coveralls, with a contagious chuckle and only eight fingers. He lost the left pointer and middle finger as a child in a dairy accident in North Dakota.

“I grew up without any fingers and never really knew that it was a problem,” he says, at home outside of his butcher shop near Cheney. “Then I got married and tried to find a job, and no one would even let me put in an application.”

Ken’s shop is spotless. It smells like cold, wet metal, despite the gallon of milk, pack of Keystone Ice, and 30 to 50 carcasses in the freezer. He, his son, and a female employee cut, wrap, smoke and process livestock into ground beef, lamb chops and racks of ribs.

At 19, Ken got a job with a meat-packing company in Great Falls, Mont. He moved to Spokane in 1968 and found a job “washing beef and boning heads” at United Dress Meats. By 1973, he had struck out on his own as a mobile butcher.

“When I first started coming out here [on the farms], I worked at the pack house during the day and was cutting meat from 6 to midnight,” he says. “I butchered by the light of my headlights and then did all the slaughtering on the weekends.” Today, Ken’s wife handles the phone calls and cutting orders. His son started into the family business when he was 11 years old, “folding hides and throwing feet into the truck.” Ken says he wanted the business to be there for his son if he wanted it, but it was never something he encouraged Jeff to do.

“It’s a lot of work,” he says. “It would have been nicer if he was a computer guru.”

But Jeff Wilke is not a computer guru. He works with his father for more than 80 hours each week, doing a dirty, thankless job, and today on Pille’s farm, he’s elbow-deep in a sheep’s lanolin.

In less than 30 minutes, a pile of rose-colored lungs, jade intestines and a blueish-gray stomach sack lie in piles on the ground. Hearts and livers go into a five-gallon bucket to feed farmer Pille’s cats. The rest of the organs go into a chamber in the truck and will be dropped off at Baker Commodities to be turned into animal byproducts.

As they pull out of Pille’s farm, thick red sludge trickles out from the back of the slaughtermobile. Before they even reach the driveway, both Ken and Wilke have cigarettes pressed between their lips.

With the demise of Spokane’s packing houses, mobile units like Ken’s (he says there are fewer than 10 in Spokane) have found a market.

Mobile slaughter trucks are the solution for farmers who don’t want to ship their livestock to Moses Lake or Sandpoint to be butchered or don’t have the equipment and skill-set to slaughter and dress their own meat.

Ken and his son slaughter 10 to 12 animals per week. Their truck is inspected four times a year — twice by federal agencies and twice by state agencies. The inspections are based largely on the truck and shop’s cleanliness.

But nevertheless, Ken doesn’t see his life’s work as a dirty job.

“A dirty job is getting grease on my hands that I can’t get off with soap and water,” he says. “Blood just rinses off.”