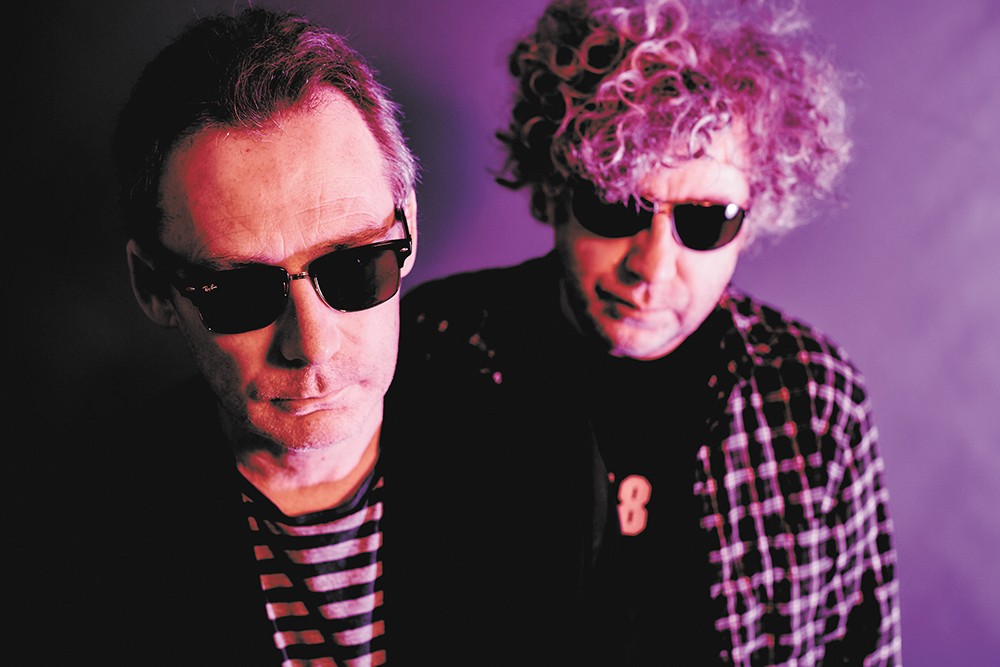 Steve Gullick
Jim (left) and William Reid are the noise architects behind the Jesus and Mary Chain, who play the Bing on Oct. 26.

Few bands in rock history are held in such a high regard,

despite their total disinterest in crowd-pleasing, as the Jesus and Mary Chain. They're often credited as being among the originators of shoegaze, but more than anything, lead songwriting duo (and brothers) Jim and William Reid controlled their sound more like a punk band with a penchant for surf rock, '60s girl groups and sickeningly serrated guitar feedback.

Without question, the Scottish band's most enduring single is the gorgeous dream-pop anthem "Just Like Honey," but it's somewhat ironic that a band so chameleonic throughout its existence is best known for one of its very first musical outings. There's a lot to unpack in their aurally dense catalog, but if you're new to the group, these tracks would be a great place to start.

Clocking in at exactly three minutes, the Reid brothers' debut single "Upside Down" has taken on iconic status for its ingenuity, as well as a total disregard for the well-being of its audience's eardrums. The clamoring drum introduction is exciting but innocent enough, giving you mere moments to prepare for an onslaught of shrieking distortion feedback on the horizon. The simple, surf-rock disguise the song wears is a bizarrely breezy backdrop, but we're really here for the notorious, yet oddly musical, feedback squelches. When people dismissively say, "It's just noise," this is what they're referring to. And they're wrong.

Effortlessly cool is another coat frequently worn by the Jesus and Mary Chain, and no early track boasts an old-school bravado quite like "Taste the Floor" from their debut LP Psychocandy. Trading back and forth between a leather-clad American rock pastiche and the jarring scrapes of metallic guitar feedback, it perfectly marries two seemingly incompatible sounds and, in the process, solidified the compelling dichotomy that the J&MC would focus on in their early career.

The Jesus and Mary Chain is a band that positively oozes an aloof attitude on the surface, so it's often a shock to experience the earnest, hopeless romanticism employed in so many of their songs. "You Trip Me Up" is a perfect example, and like sister track "Just Like Honey," it deals in both pillow-softness and shrill depravity, recreating heartbreak by inciting headaches.

Purists be damned, the second full-length album from the Jesus and Mary Chain was a welcome maturation of the Reid brothers' aural and lyrical inclinations. Darklands sees the J&MC cleaning up their production considerably, providing hefty amounts of clean space for their songwriting to shine like it couldn't in the past. Career highlight "April Skies" is gorgeous, a pure piece of lovesick pop music with a deliciously sharp edge.

Not content to be rebranded as a softer, approachable pop band, the J&MC returned to their ear-splitting roots in extravagant fashion with "Sidewalking." Snide, sneering and properly snotty, "Sidewalking" brings it all back — the fuzz, the cocky demeanor and, most importantly, the sweet, piercing treble of William Reid's guitar.

Automatic, the band's third LP, is widely considered something of a creative dirge for the Jesus and Mary Chain. A few standout songs have given the record a cult following, though, and one of them is among the J&MC's very best tracks: "Head On," a brilliant piece of guitar pop famously covered by the Pixies two years later. Lyrically speaking, Jim Reid has almost never topped the gleefully dazed chorus: "Makes you wanna feel / Makes you wanna try / Makes you wanna blow the stars from the sky."

The '90s saw a seismic shift in the band's production approach, and titling their first full-length of the decade Honey's Dead was a very deliberate stab at their past selves — this isn't the same beast that made "Just Like Honey" seven years prior. "Rollercoaster" wraps all of this galvanized new energy into one blaring track, with explosive live drums, and power chords that crunch as much as they jangle, all in a perfect shade of melancholy.

No track that the Jesus and Mary Chain has ever recorded has gotten to the point as quickly as "Far Gone and Out," Honey's Dead's definitive standout and one of the all-time great shoegaze songs. Kickstarted by a propulsive snare roll seemingly borrowed from contemporaries My Bloody Valentine, it's a gut-punch of newfound enthusiasm, all centered around a white-hot breakbeat. The guitars oscillate between big, fuzzy blasts and sun-kissed sparkles, perfectly complementing Jim Reid in a rare sing-along mood: "Hey, hey, hey! I got to get her back!"

By the mid-'90s, it was time for the band to reinvent itself once again. "Sometimes Always," a duet with Mazzy Star's angelic-voiced Hope Sandoval, presents the J&MC deep in the throes of a shambolic pensiveness. Abandoning murderous fuzz in exchange for shimmering acoustic guitars and an alt-country twinge, the painfully brief tapestry woven by Sandoval and Jim Reid is a defining moment in the band's history, a sound they continue to explore in their later career. ♦