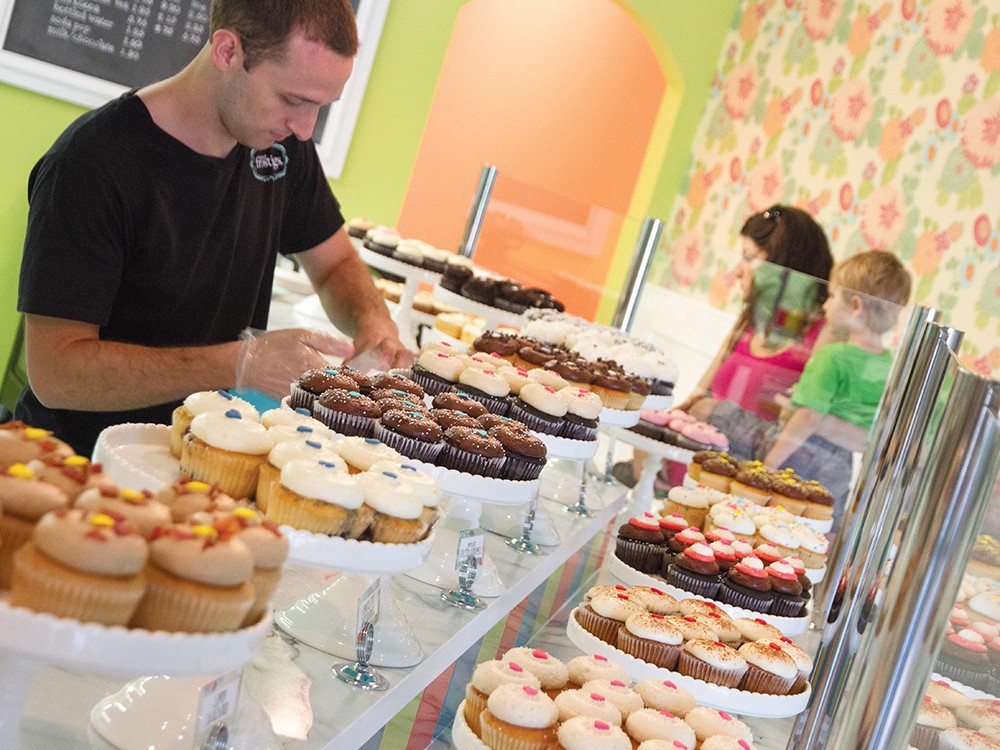 Jennifer Debarros
The same cupcakes and other goodies that made Sweet Frostings a hit downtown can now be found in North Spokane.

In the parking lot of a far north Spokane strip mall, the aroma of sugary goodness beckons.

It’s only the second day of business for the newest installment of Sweet Frostings, the popular dessert bakery that started out less than two years ago downtown at the corner of First Avenue and Washington Street. While the bakery’s owners, Judy Rozier and Sally Winfrey, didn’t make a big announcement about their Wandermere store opening last week, word of mouth travels fast and customers flocked there for signature heart-embellished cupcakes and other sweet treats. Rozier estimates as many as 1,500 people stopped into the new store on its first day of business.

Patrons of the downtown Sweet Frostings should quickly recognize the colorful, whimsical space upon entering from the parking lot through heavy wooden front doors. The same vintage-inspired floral wallpaper in the downtown Sweet Frostings spans the length of a long wall across from a two-tiered bakery counter lined with white cake stands displaying fluffy, frosting-laden cupcakes. Decorative poufs of tissue paper hang above the counter in alternating colors of white, blue and pink. White metal tables and chairs that could have been plucked off the street outside a Parisian café cover the front of the long, rectangular space.

While Sweet Frostings opened its flagship store just shy of two years ago, Rozier says she and Winfrey “decided that the downtown store was well on its way to doing very well and even though people up north know us, many didn’t, and that’s why we needed a location [here].”

Most aspects of the new store are generally the same as downtown, Rozier says, except that no baking is done at the Wandermere location. Instead, staff at the downtown store’s bakery prepare baked goods the night before. In the morning, the treats are transported north where the finishing touches are done. Because of its later opening hours, there won’t be pastries at the north-side store every day, just Friday and Saturday, and the treat shop’s gelato is pre-packaged into pint-sized containers to save floor space that would have been used for a case freezer, Rozier says. The newly opened store also offers a quaintly decorated party room that can be rented out for special events, like birthday parties and showers.

If the north-side store is as well-received as Sweet Frostings’ downtown spot, Rozier says the plan is to expand the business across the Spokane area, with the upper South Hill and Spokane Valley top contenders for a third store. When she and Winfrey started the business, Rozier says they set a goal to open one store each year during their first 10 years of business. A lofty goal, no doubt, but the business partners’ model seems to be working so far. Rozier estimates Sweet Frostings’ business has increased by as much as 30 percent compared with this time last year.