The WSU ice cream shop is changing, but the important things are staying the same 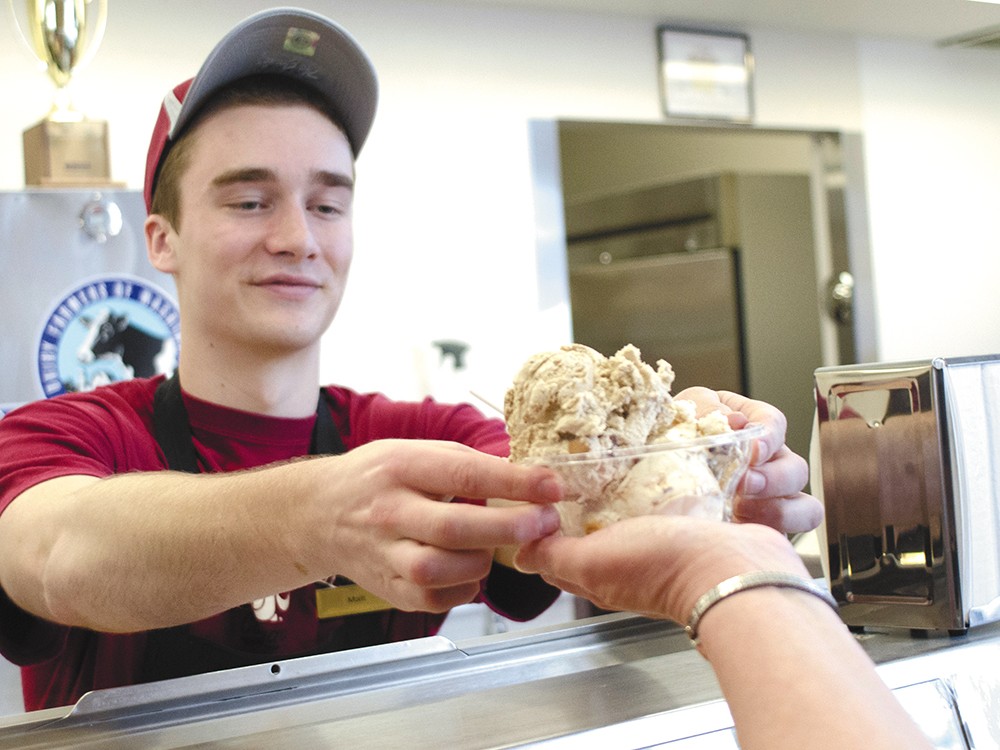 Older alumni remember the original Ferdinand’s Ice Cream Shoppe in Troy Hall, and I have vague memories of the painted panels telling the beloved children’s story of Ferdinand the Bull. But for most of my life I’ve known Ferdinand’s at its current location, tucked away near the edge of the main campus, where it relocated in 1992.

An expansion is underway at the Washington State University landmark to add more seating and improve the flow of customers. The shop is still in its cocoon phase of renovation: Ducts poke from the unfinished ceiling, and large plywood boards are up where the new windows will be. Much of the work was done over spring break, and the rest will be finished after graduation. It’s staying open in the meantime, however, and was bustling during the warm afternoon last Friday. A few visitors were stocking up on the signature cans of Cougar Gold cheese, but most came for the ice cream: vanilla, blackberry ripple, Apple Cup Crisp, one scoop chocolate with one scoop peppermint.

It’s a fitting tradition for a university born as a land-grant institution — a “cow college” — and, well, something had to be done with the milk from the school’s Holsteins. In the early years a private company processed the milk for dining halls and sales, but the school took over in 1948 and put students to work. The dairy counter started out selling white milk, chocolate milk and just three flavors of ice cream.

My grandparents have lived in Pullman forever, and when I was young there was a reliable pattern to campus visits: We would go see the bears in their pen at the base of Grimes Way, and then we would get ice cream at Ferdinand’s. Before choosing a flavor, we would run up the steps to the observation room overlooking the large, bright facility where cheese is made. Students still work in the creamery, and the milk still comes from the school’s cows.

Now, as an alumna, it’s my role to be wary of change. The grand new stadium entrance is foreign concrete; the new dorms rise up suspiciously like weeds. Where is my favorite ugly tree and the cracked sidewalk I crossed so many times? Renovations are done in the summers and semester breaks, and each incoming class begins fresh; no controversy lives more than four years. I imagine it is true that every isolated university town has a Brigadoon quality to it — a timelessness and steadfastness that sets off the changes in sharper relief — but this is the one I know.

At Ferdinand’s, at least, there is no reason for alarm. A generous waffle cone is still $2.25, and the flavors still rotate with the seasons. The black-and-white checkerboard floor has been extended, and the counters are rearranged to make the line move more quickly when they’re slammed — Mom’s Weekend this month will be the first big test — but the essentials are the same. The huckleberry ripple is still abundantly rippled, and it still tastes like sunny afternoons when my greatest care was a dripping cone.