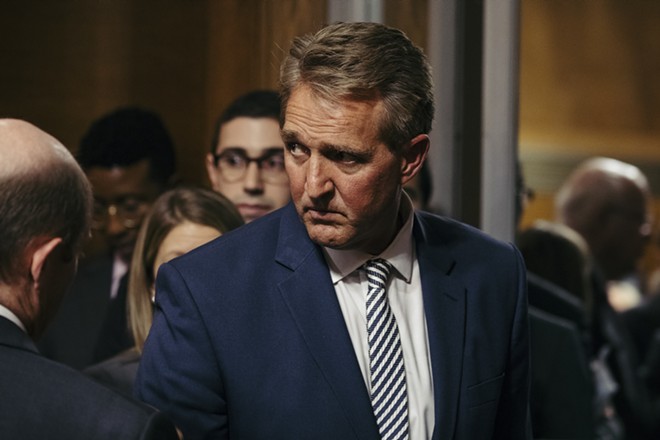 WASHINGTON — Three influential Republicans, who together could decide whether Judge Brett Kavanaugh will sit on the Supreme Court, condemned Wednesday comments by President Donald Trump that mocked one of the women who has accused his nominee of sexual assault.

The president’s mockery of the woman, Christine Blasey Ford, at a Mississippi campaign rally on Tuesday injected still more uncertainty into the confirmation of Kavanaugh and only served to heighten tensions as senators prepared for the FBI to deliver as soon as Wednesday afternoon transcripts of interviews from a brief supplemental background investigation into accusations against the nominee.

Sen. Lisa Murkowski, R-Alaska, told reporters: “I am taking everything into account. The president’s comments yesterday mocking Dr. Ford were wholly inappropriate and in my view unacceptable.”

On NBC’s “Today,” Sen. Jeff Flake, R-Ariz., said, “There is no time and no place for remarks like that, but to discuss something this sensitive at a political rally is just not right.”

“I wish he hadn’t have done it and I just say it’s kind of appalling,” Flake added.

Those swift rebukes, and others from liberal Democrats trying to sink Kavanaugh’s confirmation, reflected the strained atmosphere that has settled over Capitol Hill as the Senate lurches toward a final vote on Kavanaugh that could alter the course of the Supreme Court. A White House official said Trump was merely “stating facts.”

Collins did not indicate that the comments would affect her final vote on Kavanaugh’s confirmation, which could come as soon as late this week. Flake said it would not: “No, you can’t blame or take it out on other people, the president’s insensitive remarks.”

Instead, the senators have said they are waiting for the results of a supplemental background investigation by the FBI into sexual misconduct claims — findings that were expected to reach Capitol Hill by late Wednesday. Senators were told that they would be able to review the material in a secured room as soon as it was transmitted.

Sen. Roy Blunt of Missouri, a member of the Republican leadership, said that if that occurs Wednesday, the Senate would likely hold a procedural vote Friday and a final confirmation vote Saturday.