After 26 years of reporting the news in Spokane, Jeff Humphrey goes from KXLY to the city government he once covered 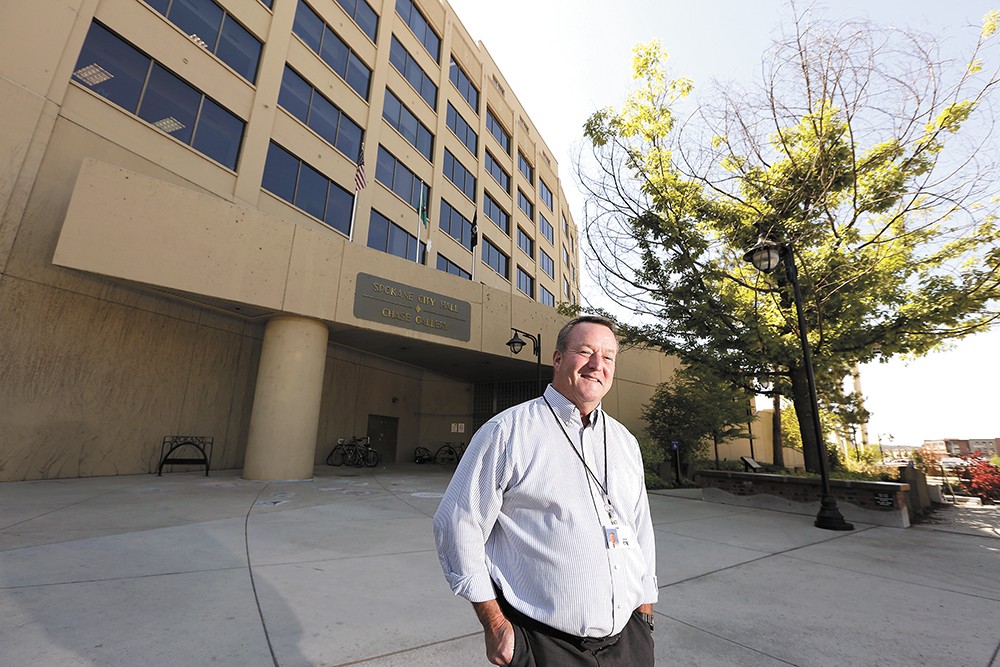 Young Kwak
TV reporter Jeff Humphrey has left KXLY and is now working to create video stories for the city of Spokane.

For a moment, two years ago, Jeff Humphrey may have been the most famous local TV news reporter in the country.

Humphrey says you can see his mic shaking in the footage. He's nervous. Working off a tip from a private detective, he's about to accuse then-NAACP President Rachel Dolezal of lying about her race.

"I was not 100 percent sure that the information was correct," Humphrey recalls. "In the back of my mind, I'm thinking, 'If you don't have this right, and you're now harassing some African-American woman about her ethnic background?'"

He asks her if she's African American.

Humphrey didn't break that story — he's happy to give credit to the Coeur d'Alene Press — but TV has a power that print doesn't. It's ready-made for this journalistic era of clicks, GIFs, memes and YouTube clips. That moment with Dolezal went viral, taking Humphrey with it.

Yet at the same time, this period of journalism has frustrated Humphrey. For 26 years — first at KREM and then at KXLY — Humphrey has been a Spokane TV reporter.

But today, standing in front of City Hall, there's no mic in his hand or TV camera in his face. Instead, there's a City of Spokane employee ID card around his neck. The picture casts his face in a saturated orange.

Last month, Humphrey left KXLY to take a "media content coordinator" job with the city. It's a temporary job — a 35-hour-a-week, temp-seasonal position that pays $28.67 an hour. The position is an experiment, one where the city is testing new ways to use video to communicate to the public and press.

And it highlights the way that journalism is shifting, blurring the distinction between reporter and city spokesman.

TV journalism was Jeff Humphrey's life. He got his first TV journalism job at 16. It was his father's life, too. Humphrey's dad, an NBC investigative news reporter named Don Harris, died in the service of journalism. Humphrey was still a teenager in November 1978 when Harris confronted cult leader Jim Jones at Jones' compound in the small South American country of Guyana. Harris, along with a U.S. congressman and several other journalists, was gunned down by Jones' cultists.

"He was my hero," Humphrey says of his dad. "I just worshiped him."

Humphrey became a TV newsman, but one who stayed local. After arriving in Spokane in 1990, he stuck around, reporting on police and military issues.

"In my 28 years, I can't remember how many reporters I've talked to, and they've come and they're gone," says Spokane Police Capt. Dan Torok. But Torok can't remember a time without Humphrey.

And that time paid off. As a general rule, cops aren't huge fans of reporters, but Humphrey was able to build trust with them. He would refuse to report anything that could compromise an ongoing investigation. He showed them he understood the difficulties that cops face every day.

The relationships paid off with scoop after scoop. Humphrey led the coverage of the investigation of serial killer Robert Yates. When there was an officer-involved shooting, he'd get phone calls.

"When bad things happen, I was the first one to report it, too," Humphrey says.

His reporting has been praised as fair by both police officers, like Torok, and advocates of police oversight, like the Center for Justice's Rick Eichstaedt. Still, Humphrey has sought to avoid casting the police as a whole in a negative light. He'd report on a cop beating mentally disabled janitor Otto Zehm with his baton in 2006 — Zehm died shortly thereafter — but also how a cop could see the two-liter soda bottle Zehm was holding as a potentially dangerous weapon.

"I don't think even the TV station wins if you bad-mouth the police department," Humphrey says. "Really, the only people winning there [are] the crooks."

Two years ago, he says he sat on an explosive story. He says he knew, almost immediately, how abusive and destructive then-Police Chief Frank Straub was to Spokane's police department. But, concerned about losing his access, he didn't report it.

"If I poke the bear, and I don't kill the bear, then the bear's going to eat me," Humphrey says. "You haven't given the cops the relief they're looking for, and you're now on the chief's hit list, and you're never going to get a story again."

It's the risk inherent in the dance between beat reporter and subject — anger the sheriff with one critical story too many, and watch as he stops sending you press releases. But in the case of Straub, Humphrey says he screwed up. The public wouldn't learn about Straub's abusive management style until after he was ousted in September of 2015.

"I pussed out," he says. "I think pussing out is always a mistake."

"I'm 55 years old. I'm starting to wonder: Am I going to stand out in the snow, telling people it's snowing, until I'm 63?" Humphrey says. "If you're doing it right, the news business consumes you. And dominates every part of your life."

Beyond that, he says, he was frustrated by the way the news business was changing.

"I'm not crazy about social media," he says. "You get marks for interacting with people and debating the news with the people."

Humphrey says he prefers the traditional method — just put the news out.

These days, in a typical week, KXLY posts to Facebook more than 200 times. Humphrey isn't the most web-savvy reporter.

"I'm embarrassed to tell you that after 26 years in Spokane — supposedly a guy in the know — I didn't even know the city had a website," he says.

And after he let his unhappiness with KXLY clearly be known, he says his bosses gave him two months to find something he liked better.

That's when Brian Coddington, spokesman for the city of Spokane, reached out. He had a job offer for Humphrey.

"At the end of the day, he's a storyteller," Coddington says about Humphrey. "And that's the talent we're looking to have."

The city isn't hiring Humphrey to be another spokesman — at least, not exactly. Instead, they want him to do much of what he did at KXLY: Produce TV-style news stories, but this time in the service of the city of Spokane. In particular, he's working with the Community and Neighborhood Services Division, where he might, say, tell the personal story of a homeless person who had their life affected by one of the city's programs. These stories would be uploaded online, put out on social media, or run on City Cable Channel 5.

Humphrey gushes about the opportunities created by his new role, and excitedly discusses one of his first city stories, titled "Does the City of Spokane Provide Circumcisions?"

It focuses on the wide — sometimes bizarre — array of questions that citizens ask of the staffers who answer the My Spokane 311 telephones. The prospect of pumping out positive stories about the city doesn't bother him — far from it.

Jim McPherson, who used to teach media criticism at Whitworth University, says there's been a troubling trend of TV news stations nationwide running unaltered "video press releases," complete with scripts for their anchors, from nonprofits or other entities.

Marlene Feist, the city spokeswoman for the utilities department, says it's unlikely that local news stations would run pre-produced news packages from the city of Spokane. But she says that Humphrey could pull together footage that would be useful for news stations.

"As a former reporter, I know what reporters want," Humphrey says.

He has other ideas, too: Like releasing raw police body-camera footage, paired with the call for service.

"Put it out to the news media without commentary," Humphrey says. "They could use it or not use it."

The use of body-camera footage in this manner has sometimes drawn objections. Last year, Spokane attorney Frank Cikutovich complained after body-cam footage of his client's apparently drunk confrontation with a police officer went viral after being uploaded to Facebook with snarky commentary.

Humphrey says he thinks it would be wrong to "cut in line" with existing records requests. But he sees body cameras as an untapped resource that can give the public a view into what the cops see every day.

"Think about it, every single night, there's miles and miles of video being recorded," Humphrey says. "But we never see it unless it's [an officer-involved shooting] or someone does a public records request. People are so into this reality TV thing? This is the ultimate reality TV!"

These days, it's not all that unusual for a reporter to make the leap from covering the government for working for that same government. The Idaho Statesman's Dan Popkey, for example, went from being a crusading reporter — whose exposé on Sen. Larry Craig's bathroom sex scandal got him nominated for a Pulitzer — to leading Rep. Raul Labrador's communications team.

Almost exactly a year before being hired by the city, Humphrey stood outside City Hall and pulled no punches as he detailed the findings of the independent investigator hired to look into the circumstances — including attempts by the mayor to hide sexual harassment allegations against the police chief — surrounding Straub's ouster.

Coddington says that Mayor David Condon welcomes accountability from the press, and says that Humphrey had a reputation of being fair. Today, Humphrey uses the fact that he was hired despite reporting on the mayor's missteps as a reason to praise the mayor.

"I did not expect the mayor to ever forgive and forget," Humphrey says. "But he seemingly has, and has extended me a pretty large length of trust."

For now, the job is temporary, only through the end of the year. But Humphrey hopes that he can use his news-business experience to prove his value.

"I'm going to try to impress these people," he says.

Even if he does return to the world of journalism, Humphrey says his viewpoint has been changed by his experience.