Sympathy for the Old Devil 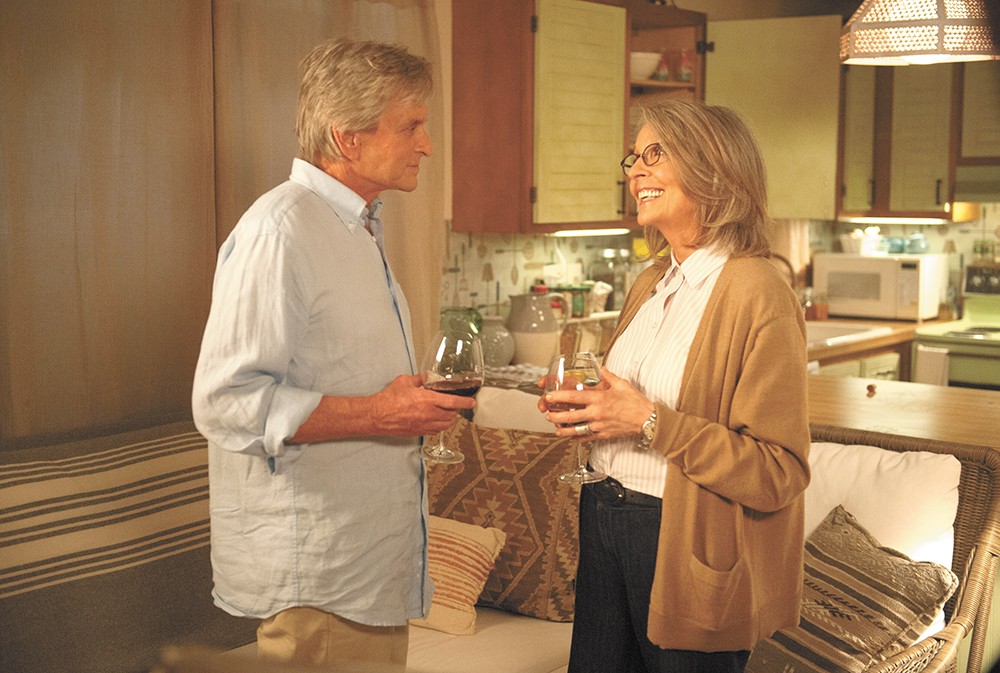 In the opening moments

of And So It Goes, Oren Little (Michael Douglas) visits the grave of his beloved wife. It's a scene that provides a humanizing context for Oren, since he's generally horrible to most of the people with whom he interacts — kinda casually (but vaguely adorably) racist, kinda casually (but vaguely adorably) self-absorbed, etc. And heaven forbid, in a movie revolving around a character of that sort, that we should spend more than 30 seconds worrying if we might ultimately fall in love with him.

There have been times when movies were OK with letting us gradually warm up to irascible, abrasive main characters who might require a little on-screen growing up before they're deserving of our — and by extension, the romantic co-lead's — affections. Such was the case with Billy Crystal's Harry Burns in When Harry Met Sally... (also directed by And So It Goes director Rob Reiner); such was the case with Jack Nicholson's Melvin Udall in As Good As It Gets (also written by And So It Goes screenwriter Mark Andrus). But in And So It Goes, we get to spend 95 minutes on the brutally tedious business of figuring out what the movie can't wait to let us figure out: that deep down, Oren's really a sad guy, not a bad guy.

Of course, all the movie's characters aren't privy to our filmmaker-endorsed insight. Oren — a veteran realtor in coastal Connecticut — just looks like a plain old a-hole to the residents of one of the small apartment complexes he owns, and where he's living himself while trying to sell his house. Among those residents is Leah (Diane Keaton), herself recently widowed and still prone to bursting into tears while singing standards at a local restaurant. All she sees in Oren is the guy who seems incapable of dealing with his son, Luke (Scott Shepherd), a recovering addict who is about to serve a short jail sentence. And Leah thinks even worse of Oren once he seems completely incapable — or at least unwilling — when Luke drops Oren's 10-year-old granddaughter, Sarah (Sterling Jerins), on his doorstep to take care of while Luke is serving his time.

Naturally, Leah becomes the primary caretaker for Sarah, forging such a bond that Sarah asks to call her Grandma, while Oren is only able to make Sarah baloney sandwiches and plop her down in front of Duck Dynasty. But from such awkward initial connections are nascent romances born, and Oren and Leah become chummy despite the fact that Leah is awkwardly charming and insecure in a way that may be traditionally Diane Keaton-esque but is still appealing, while Oren is a total dick. Though, lest we forget, a dick who watched his beloved wife slowly die of cancer.

And So It Goes plays out with machine-tooled, ingratiating precision, directed by Reiner with the same twinkly absence of anything recognizably human that has characterized his movies for most of the past 20 years. It's designed to satisfy a weekday matinee crowd that doesn't really want to wrestle with anything unpleasant; when Oren tries to track down Sarah's heroin-addict mother, he finds her in a backlot version of The Wrong Side of Town, where she can collapse in a sad heap right in front of the poor girl, as heroin-addicted mothers are wont to do.

But the main reason And So It Goes is so deeply irritating revolves around Oren, and the way Reiner and Andrus hold our collective hand through the process of making sure we realize he's only terrible enough a person to be comically terrible. Douglas has played plenty of stiff, entitled guys over the years — he practically became the personification of the Angry White Male in the early '90s — and he knows exactly when to switch from his gravelly growl to his crooked smile so he can provide some veteran chemistry with Keaton. That doesn't make the pile of audience-stroking nonsense around him any easier to take. If it wasn't immediately obvious, when And So It Goes introduces a very pregnant character, that Oren will somehow play a hilarious role in delivering the baby, you haven't been paying attention to how much this movie wants us to adore the old rascal.

Did we mention that his wife died? Of cancer? Very sad. ♦

And So It Goes is not showing in any theaters in the area.