Taking it to the Streets

Joan Medina is helping the hungry, one cup at a time 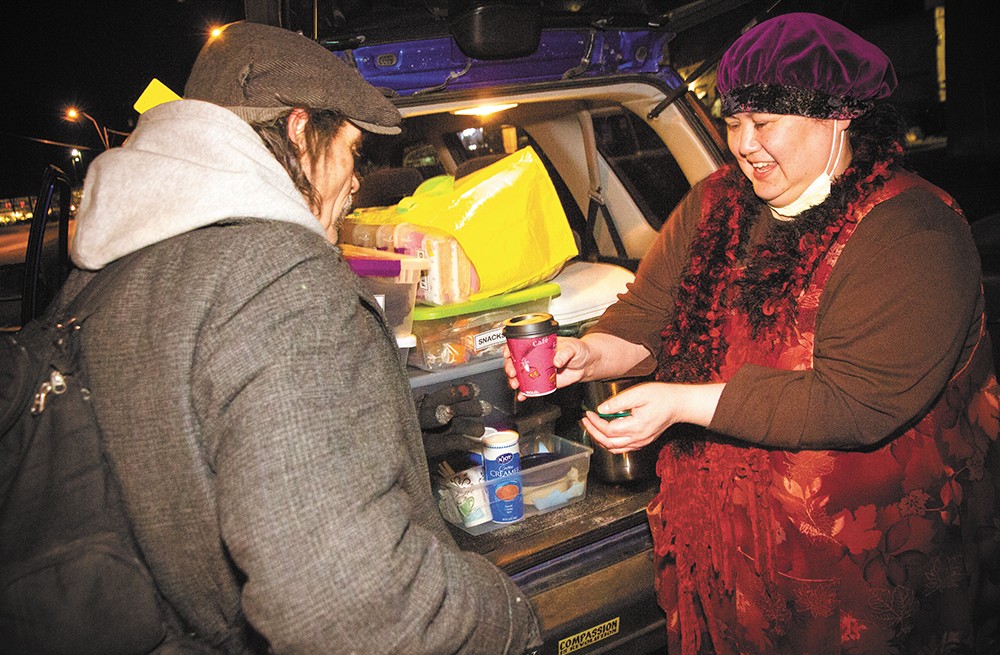 Jennifer DeBarros
"You're a saint!" says Jimbo, a homeless Spokane man, as Joan Medina serves a warm cup of coffee to him.

One year ago, Joan Medina's life changed forever — and it started with a piece of ham.

Medina is a busy woman, and on one particularly busy day last January, she looked in her fridge and saw a piece of smoked ham she didn't want to eat. Her husband Ted had just left for a six-week trip abroad, and had never gotten around to cooking it. Before she left for work that day, she chopped up the ham, threw it in a crock pot with split peas, vegetables and spices, and left.

When she got home, after a day of meetings and groups and an impromptu visit over coffee and dinner with friends, her house smelled like soup. She had forgotten all about it.

"It was, like, 7:30 by the time I got home. I'm thinking a) I don't really want this soup, and b) what am I going to do with all of this stuff?" she says, seated at her kitchen table. "So I'm thinking to myself, 'I wonder if I can take this out and share it with some people who don't have any food?' Because I don't want to throw it away."

Medina, 44, jumped on Facebook and asked her friends what they thought. Within an hour, she and a friend had handed out plastic containers of split pea soup to people around downtown Spokane.

Medina was hooked on how happy it made people, and the rush she felt from just giving without asking anything in return. The very next day she cooked up a new batch of soup, and her friend brought along a box of hand-knitted hats and scarves.

By March, when Ted returned from his trip, Medina had established a full-fledged homeless relief organization out of her kitchen, spending around $1,000 of her own money in supplies each month. That one pot of soup turned into sandwiches piled two inches high with meat, hand warmers and thick, brand-name socks. She gave out soft snacks that someone with bad teeth could chew. She handed out cough drops to soothe the rumbling coughs she kept hearing. She handed out paperback books with battery-operated book lights. The people would ask: What church was she a part of? What did they need to do in return? And she'd always say the same thing: no church, no obligation.

"We wanted people to know there are people out there like us, who will just help you without requiring anything of you. Because I don't think that's right."

Along the way, Medina would look everyone in the eye and ask two questions: How are you doing? What do you need?

"I was finding out that nobody is talking to them. No one is having conversations, no one's treating them like a f---ing human being. I wanted that to change."

By December, Joan Medina was pissed off. The rosy-cheeked woman stood before Spokane's City Council and told the stories of the people she had met over the past year in order to dissuade them from expanding the sit-lie ordinance.

"It is clear that a war has effectively been declared on these people," she said. "A war declared by certain business owners and city leaders who would like downtown cleansed of all 'undesirables.'"

That first pot of soup wasn't just a good deed for Medina. It was the spark that lit a fire inside of her. She wanted to feed homeless people in Spokane and keep them warm, but she wanted to defend them, too. She wanted them to know that even if it seemed like no else cared about them, she did. In one year, her passion has taken her in front of the city council, to meetings with police officers. It's made her apply for a nonprofit status and name her group Brigid's Cloak.

And it's opened up a whole new world to her. Tonight, you can feel the joy that it brings Medina. At her stove, she pours a gallon of organic milk into a stockpot and carefully whisks in a bag of Ghirardelli chocolate. Ted brews coffee — organic, shade-grown — and pours it into a carafe. Jordan Hilker, who also works at the downtown library, packs tangerines and granola bars into baggies.

At 9 pm, they load up the car and drive downtown. Just before they cross the Monroe Street Bridge, Joan spots a pair of guys with big backpacks and rolls down her window: "Do you want some hot coffee or a sandwich?" They look at each other and nod their heads.

After a few minutes, the men have reusable Rosauers shopping totes stuffed with food and supplies. They're holding mochas Joan has made for them, and they're smiling.

"It's not every day a car pulls up and they say, 'Do you want some hot coffee or hot chocolate," one of them says to Joan. He pauses and points to his chest: "It just warms you right here."

She tells them to be safe, to stay warm. And she hops back into her car and continues her search for the people who might need her most. ♦