The secret to a successful American hockey team? Bird dogs. 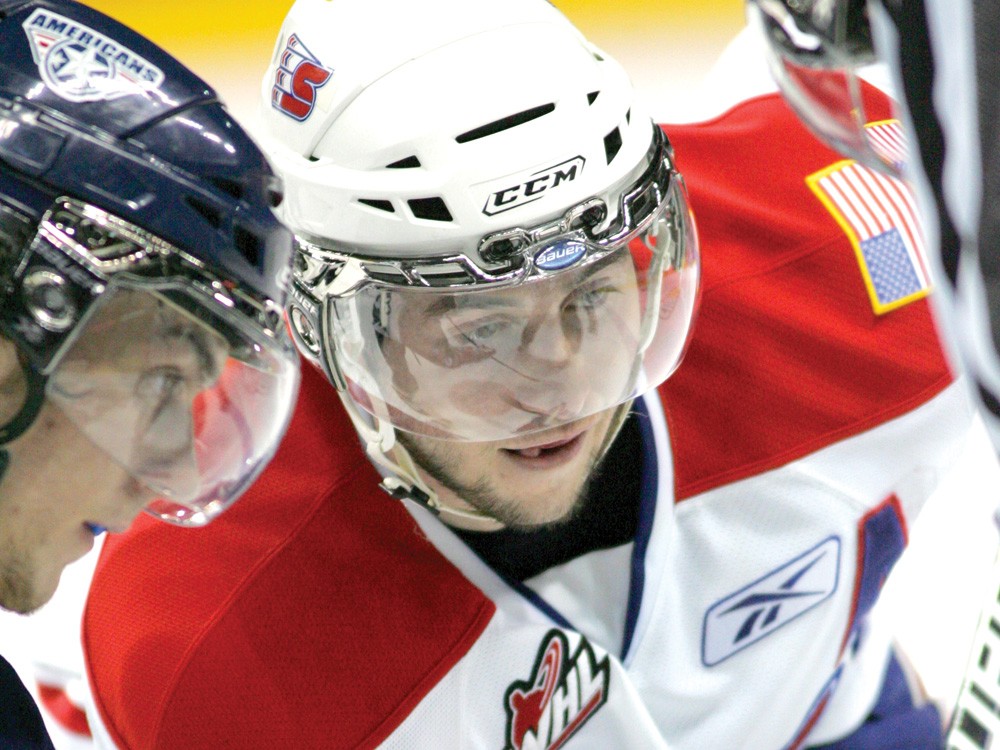 Former Chief Tyler Johnson was a rare find coming out of the Club’s backyard in Liberty Lake.

The Spokane Chiefs play before thousands of fans in a modern, 10,000-seat arena located in a mid-sized American city where the temperature rarely drops below zero.

No wonder it represents something of a culture shock for some players when they join the Chiefs. Before coming to Spokane, many of the Chiefs played most or all of their games in tiny arenas before miniscule crowds in small towns scattered across frosty Canada.

The foundation of any major junior hockey team’s success is scouting. Most Western Hockey League players, who generally range in age from 16 to 20, are Canadians who were drafted by teams that scouted their Bantam Division (ages 13-14) games from Chilliwack, British Columbia, to Medicine Hat, Alberta, to Flin Flon, Manitoba, and beyond.

As the Chiefs’ only full-time, salaried scout — the team also employs about a dozen part-time scouts, known as “bird dogs” — Chris Moulton of Fernie, B.C., constantly flies or drives to Bantam games all over Western Canada and occasionally in the United States. The bird dogs usually stay close to home in Canada, except for one in Minnesota.

“If [scouts] don’t work hard and they don’t get out to see games, the players are not going to fall in their laps,” Chiefs General Manager Tim Speltz says. “There’s no easy method to it. You’ve got to put the work into it.”

Scouting teen-aged hockey players is loaded with obstacles. “The biggest challenge is not necessarily identifying the best player in the game you’re watching,” Speltz points out. “It’s projecting who’s going to be the best player [in the WHL]. That’s the part that’s a little bit tough.

“Then you get into the luck part. I mean, there’s some things that happen. All of a sudden a kid will grow 3 or 4 inches, or sometimes maybe even 6. Or sometimes bad luck, where a kid gets older and he realizes that maybe cars or girls are more important than hockey and then loses interest.”

Speltz says Moulton has the final say on ranking prospects for the annual WHL Bantam Draft. The draft involves players from Western Canada and the western half of the United States who turn 15 the year they are drafted.

“Your ideal player is one that has good size, that competes, has good skill and can skate,” Speltz says. “We’ve got a few more criteria when it comes to character and person. Those things make a difference.”

Size was a concern with all three players. What teams underestimated was the size of the players’ hearts, and their self-confidence.
Johnson qualifies as one of the greatest scouting finds in WHL history. The Chiefs drafted him in the 11th round, 201st overall, in 2005. Only 14 players went lower.

“When we went to meet the Johnsons before the draft,” Speltz recalls, “no other Western Hockey League team had talked to them. That told us, because of his size, because he’s an American player, there’s probably no one that’s going to select him.

“So, we were able to put him late in the draft. Looking back, it was a terrible risk that we ran. We should have taken him where we had him slotted skill-wise — probably between rounds three and six.”

Johnson, one of Spokane’s all-time leading scorers, led the WHL in goals last season with 53. He now plays for the Tampa Bay Lightning’s top farm club in Norfolk, Va. Spurgeon, a 10th-round Bantam pick, plays for the Minnesota Wild in the National Hockey League. Bruton, an eighth-rounder, is playing minor league hockey in Anchorage after playing Canadian college hockey and earning his degree.

A handful of the WHL’s biggest stars come from Europe. Teams are permitted to have only two European players, so rather than having a scout overseas, the Chiefs rely on networking with coaches, NHL scouts, player agents, etc.

Perhaps, but the Chiefs have struck gold with several Europeans, including Valeri Bure. The Russian right winger still holds the team record of 68 goals in one season. He went on to play 10 years in the NHL and in two Olympics.

Chris Moulton only wishes he could have flown to Russia to scout Bure. Those frequent-flyer miles really add up.

The Prince George Cougars take on the Spokane Chiefs on Sat, Dec. 10, at 7:05 pm in the annual Teddy Bear Toss game • Bring a new or gently used Teddy Bear, toss it on the ice after the Chiefs’ first goal, and the the Spokesman-Review Christmas Fund will share it with a needy family • On Wed, Dec. 14, the Everett Silvertips come to town, also at 7:05 pm • Spokane Arena • Tickets: $10-$19 • ticketswest.com • (800) 325-SEAT